Let’s face it; we don’t always need the super bright, 1080p display of our smartphone, especially for relatively simple tasks like reading e-books. This is why smartphone case maker, PocketBook, came up with a case for the Samsung Galaxy S4 called CoverReader that also acts as a secondary low-res screen for the flagship handset. 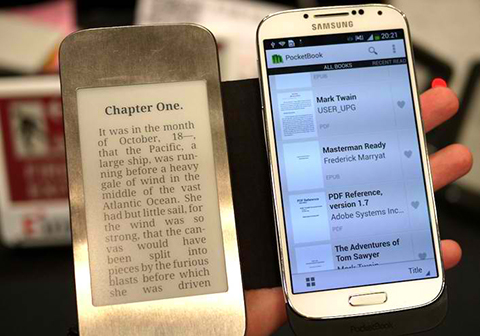 PocketBook’s S4 case makes use of a 4.3-inch PlasticLogic-made display panel with 640×480 resolution. It shares most of the characteristics of an E-Ink screen, one of which in particular is its ability to display texts with almost zero power consumption.

The only two drawbacks about the case right now is that it adds a little bulk to the device when attached and that it only works with PocketBook’s e-reader app. We can probably live with the additional heft and thickness, but it would’ve certainly been better if we can use the CoverReader for other apps like browser.

But considering that such accessory is still relatively new, we expect that the next iterations of the CoverReader will eventually have other capabilities. Either that or other manufacturers will come up with their own brand of smartphone cases similar to this but with more functionality.

Pricing and availability is yet to be announced, but The Digital Reader claims that the 4.8-inch version of the CoverReader will retail for 99 euros and will be available in October.

This looks promising. Been stuck with a Kindle reader for a while because of its e-ink which is great and non- eye straining.

Hope we get a vid review though. :D