Alongside the new iPad Mini with Retina display, Apple also introduced the latest generation of their 9.7-inch slate which is surprisingly called the iPad Air. 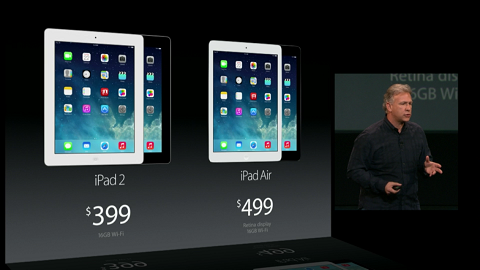 Apart from the new naming, Apple has also made a few adjustments on the iPad Air, making it thinner (7.5mm vs 9.4mm) and marginally lighter (1lb vs 1.4lb) than the 4th Generation iPad.

The company also gave their new flagship tablet a performance boost by equipping it with their latest chipset which includes the 64-bit A7 processor, a quad-core GPU, as well as the accompanying M7 processor.

The base model (16Gb, Wi-Fi only) of the Apple iPad Air has a price tag of USD499 and will be sold alongside the iPad 2 which is priced at USD399.

bought mine for 27.5k at sm north edsa last week.. since this is my first tablet, i dont have any point of comparison but so far my experience with ipad air is great! i use it for entertainment and im quite satisfied with its performance though im not actually too familiar with the benchmarks and stuff, it provides the basics i would require from a tablet..plus hardware wise i think its really durable with that high-end feel to it..hope Yugatech will post its review on this product.. thanks.. =)

Already got mine in white 16GB LTE version from as tore in V Mall Greenhills for P29,000.

looking forward to its release! :)

I really don’t get this fetish with thinner and thinner devices. Lighter, I understand to some degree. But thinner? That just compromises structural integrity, makes it prone to overheating, being prone to manhandling damage, etc. Hell, there may come a point where a sudden gust of wind goes *whoosh* and whoosh goes your tablet.

and wooosh goes your stupid opinion you fu*king imbicile :))

Being pak from behind by his gay lover every night makes abuzalzal a very bad boy wawa naman.

Excuse me, but manhandling means to move something with great effort. How can a lighter device such as the iPad Air be “prone to manhandling damage” when you’re not even exerting extra force to hold something with less weight? Also, people fail to see the advantage of a lighter form factor in the long run, especially for those who use their iPads as a productivity tool. In real life usage, having less weight to strain your arms means more time for either productivity or leisure.

Not true. Nothing beats Apple in terms of quality and reliability for both tablets and smartphone. :)

Next will be iPhone Air. With air shuffle technology!