After spending its fair share of time in the rumor mill and doing a quick pose for a number of leaksters, the iPad Mini with Retina Display has made its official debut alongside its new 9.7-inch counterpart. 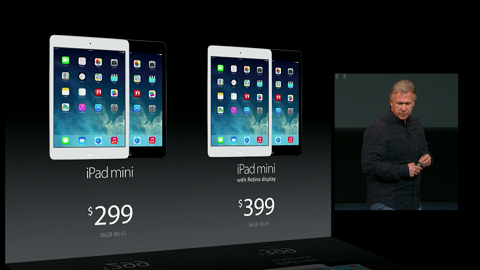 Externally, the iPad Mini 2 shares the same looks of its predecessor. But what immediately jumps to you is its QXGA screen resolution which puts this tablet in the same league as the other Retina-touting siblings like the 3rd, 4th and recently launched iPad 5.

More than just the Retina display, the iPad Mini also gets an engine overhaul; now sporting the fairly new 64-bit Apple A7 processor, along with the M7 battery saving core.

The 16GB, Wi-Fi only version of the iPad Mini with Retina Display will be sold for USD399. Instead of scrapping its predecessor, Apple has decided to keep the first iPad Mini which will now be retailed for USD299 (16GB Wi-Fi).

as per Apple yun

i agree with Ryan. I have iPad 4, tapos naka full charge siya then I went out of the country (I forgot to bring my iPad) and bale 8 days ako sa HK pagblik ko on the 9th day 89% nalang battery… and take note 50% brightness at naka ON ang wifi and bluetooth using ios 7.0.2…

why apple ipad mini price is high than andriod?? my cherry mobile flear is good hehe better than ipad

Kindly get hild ka muna ng apple product para matest mo. Especially sa battery. Although there are issues on the iphones, the ipads and mac portables are on a different league.

If there are battery issues naman (daw) kang nababasa sa internet via reviews or complaints, reasons would be defective ang unit and more importantly, balahura yung gumagamit. And for sure, the latter it is.

I really enjoy your commentaries!