The first few instances of truly wireless headphones out in the market made us all go, “What if it falls out? What if we lose the other pair?” and other questions. These days, we usually see truly wireless earbuds with just the earpiece itself fitting in the user’s ears, but JBL here has launched wireless earbuds that have ear hooks to make sure they stay in place. Check out our review of the JBL Endurance Peak True Wireless Headphones! 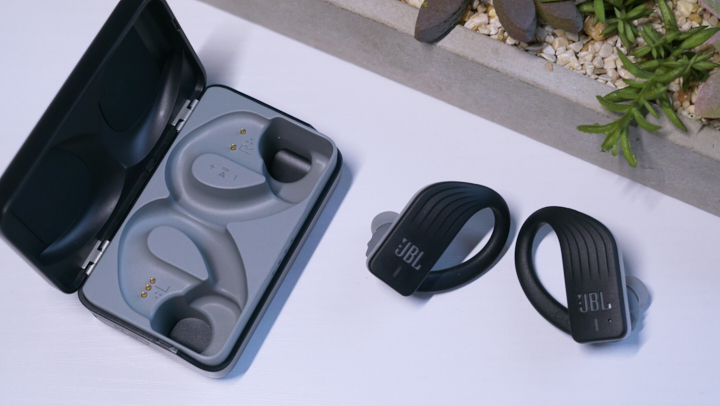 As mentioned, unlike other true wireless earbuds, the JBL Endurance Peak earbuds have ear hooks on them. JBL has mainly advertised these buds for athletic use, hence the hooks that will help them stay in place despite any movement. The buds are available in three colors, namely Red, Blue, and Black, with the ones we have on hand in the latter color.

The Endurance Peak seems to be constructed with plastic, but they feel sturdy and well-built, as expected from JBL. Parts of the buds are rubberized, namely the outer part, hooks, and Twistlocks. 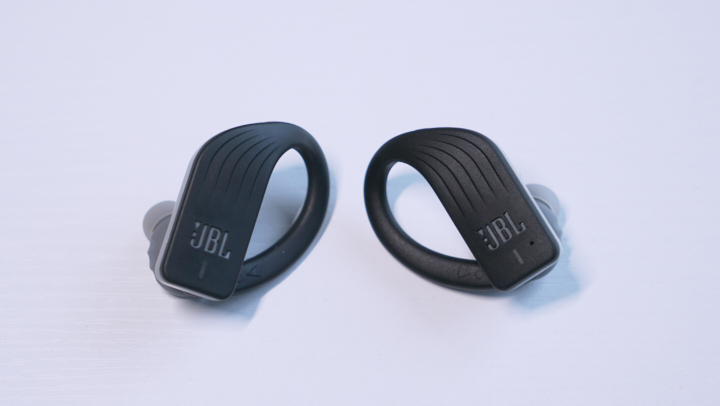 On the outer panel, one can see the JBL logo and the Bluetooth light indicator. The light is blue when it’s in use and it turns red when it runs out of battery or upon switching it off. 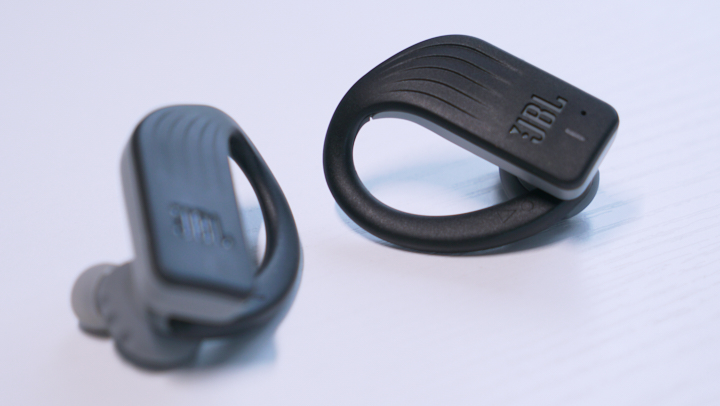 The ends of the hooks are magnetic and automatically lock against the rear of each earbud. The magnetic ear hook on the right bud turns the headphones on automatically when detached while locking it in place will switch them off. 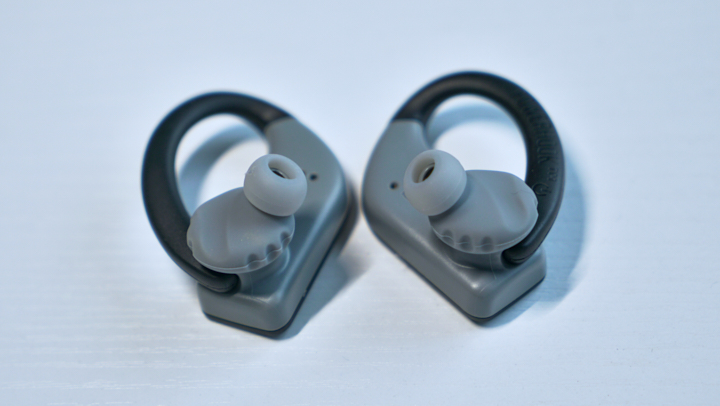 Three ear tip sizes come with the Endurance Peak, in large, medium, and small, to secure the fit and comfort in-ear. Pictured here is the smallest ear tip. 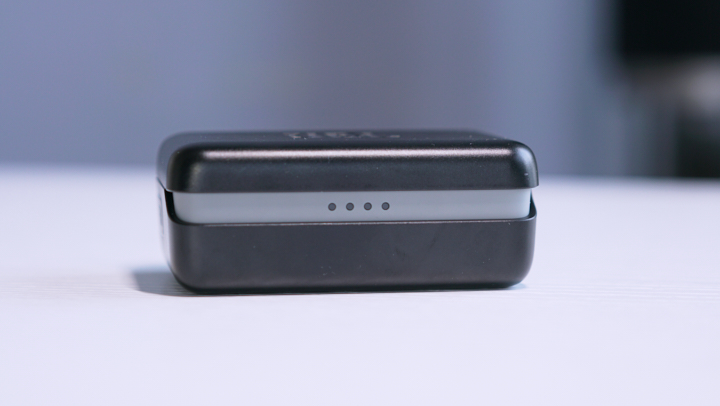 Like most true wireless headphones, the Endurance Peak also comes with its own carrying case that doubles as a charger. Upfront, it has four indicating lights to signify how much battery the case has remaining. On the right, it has a micro USB port for charging. Situated on the left rear corner is a lanyard loop for those who’d like to attach a charm or strap to the case. 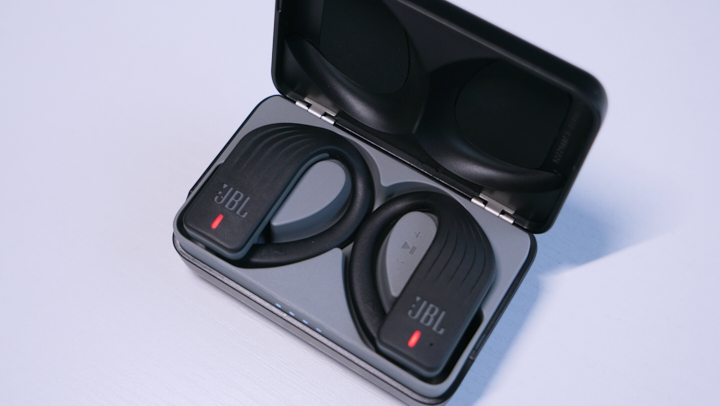 Setting up the Endurance Peak is rather easy. To switch it on, simply pull back the right ear hook from the earpiece; the indicator lights will display a red light first, and then switch to blue. Once it’s blue, it’s ready to be connected to your devices via Bluetooth. You’ll hear a sound on the right bud when upon successfully connecting the Endurance Peak. There are times though when the music would stutter even with your device right next to you but it happens randomly and most of the time, the playback is smooth.

The right earbud manages the controls for the buds. One tap plays or pauses music, two taps skip tracks, while three taps rewind them. Swiping upwards results into switching the volume up, while swiping downwards will lower it. All taps must be done on the touch-sensitive surface just around the JBL logo, otherwise, it won’t work.

The touch controls work well; so well in fact that the slightest bump of your hand or finger against the surface will result into either accidentally pausing or playing the music, or even switching the track. The oversensitivity is inconvenient, but a pretty minor one at that. 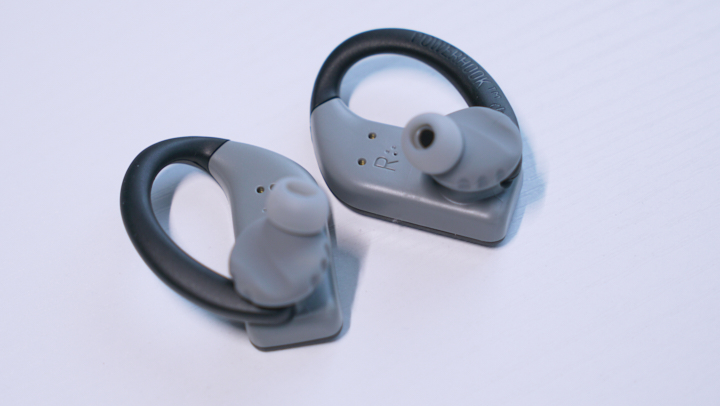 Due to the Twistlock technology, the in-ears will naturally fit the contours of the ears. They’re a bit tricky to wear if you’re not used to having Twistlocks, but a couple of adjustments in the positioning will be good. The headphones do stay in place thanks to the hooks and are initially comfortable, however, my ears felt fatigued after wearing them for a long listening session.

The Endurance Peak has an IPX7 rating, making the buds waterproof and sweatproof, ideal for workouts. Do be careful with the charging case though, as that one doesn’t have an IP rating.

The Endurance Peak gives off a favorable audio quality. Listening to Weki Meki’s Metronome with these headphones gives the bass in the song a punchy and impactful feel. Loading in NCT U’s Boss made the bass in the song feel like absolute heaven. If you’re going for a workout with these buds, you’ll probably end up pumping out more energy thanks to how the Endurance Peak makes the bass sound. 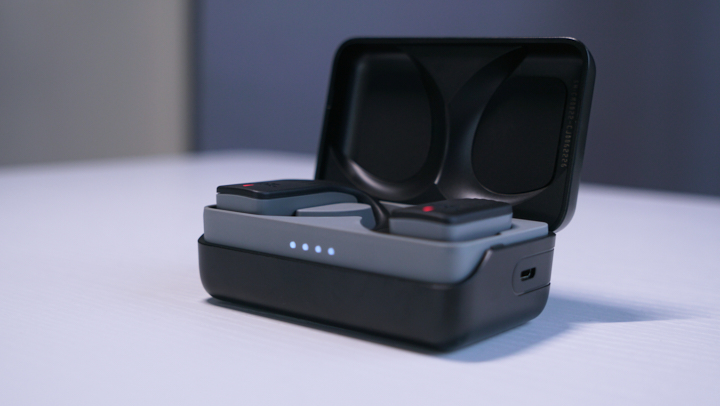 Pop and rock songs sound decent with these earbuds as well. Listening to UVERworld’s Core Pride makes me want to headbang along with the beat. However, I did wish there was a little extra kick with the electronic guitar’s sound.

Even then, the bass and all the other instruments don’t drown out the vocals; the singers’ voices still sound clear and crisp. Mids were present as well, however, some details and nuances in a couple of songs get overshadowed by everything else. Case in point, I had to listen intently to my favorite footstep sound in Red Velvet’s Bad Boy that I could usually hear clearly using other audio devices. As for highs, they sound pretty decent and aren’t tinny nor harsh to the ears. 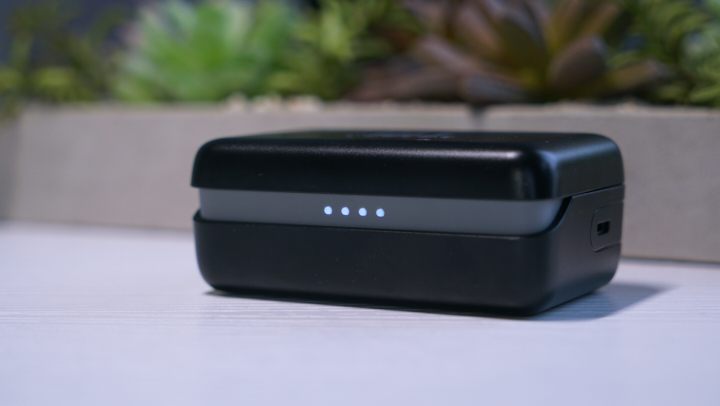 JBL has equipped the Endurance Peak with about 4 hours of continuous listening, which is a good enough runtime. The carrying case has about 24 hours of extra battery in it, and charging the Endurance Peak from 0 to a full 100% takes 2 hours. If you do find yourself unable to wait for two hours, you can let the carrying case charge it for about 15 minutes, giving you an hour’s worth of playtime. To charge up the case, JBL has provided it with a micro USB port, which I honestly see as a downside. It would’ve been nicer if it was equipped with a USB-C port instead. Priced at PHP 6,999, the JBL Endurance Peak are a fine pair of true wireless earbuds overall. It’s well-designed, produces a satisfying audio quality, has a pretty modest battery life, waterproof and sweatproof, and has hooks to ensure that the buds won’t fall out. There can be a couple of downsides though, such as the oversensitive touch panel, the micro USB port, random stutters, and some may experience ear fatigue when worn for long. Still, the earbuds are something to consider, particularly for those looking for a great pair of workout headphones.

The JBL Endurance Peak Headphones can be purchased at JBL’s online shop or at all JBL stores nationwide, except for CDO and Davao. 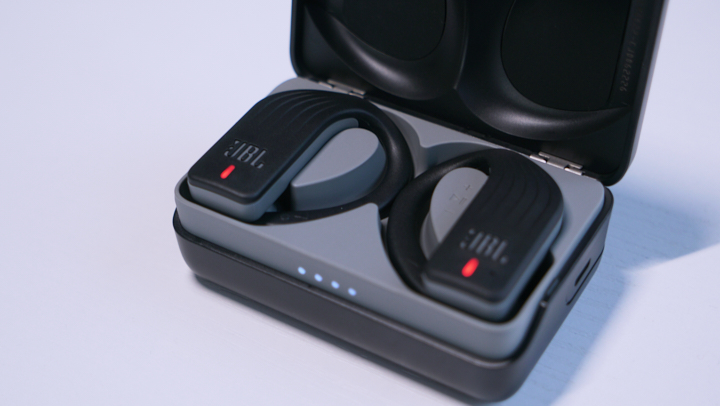 Great review! can you make a comparison video with JBL Endurance Peak and 1more Stylish TWS. I like the 1more stylish TWS earbuds.