We just came from Honda Philippines’ press conference earlier today at their Safety Driving Center in Parañaque, and we got a chance to take their new Honda Click 125i for a test drive. 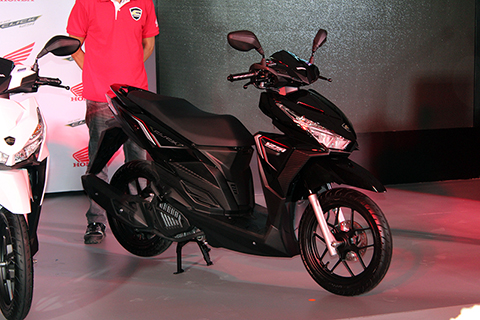 The Click 125i is a straightforward automatic transmission motorcycle that looks really sharp and agressive. Its design may remind you of some sci-fi elements you may have seen before in films and television series. Among its physical highlight features include a futuristic-looking LCD meter panel, dual LED keen headlights that promise brighter illumination, aggressive tail lights, tubeless tires, and an 18-liter compartment space large enough to put a helmet in as well as a dedicated button to open your seat compartment.

As for features that make this scooter stand out from the rest of the pack, Honda touts that this is their first motorcycle to be equipped with their new Enhanced Smart Power (eSP) fuel system engine technology that boasts a liquid cooling system and promotes noise reduction, adds durability, and maintains high fuel efficiency in its 5.5-liter fuel tank. Its fuel efficiency, according to Honda, is rated at 58.9km per liter. 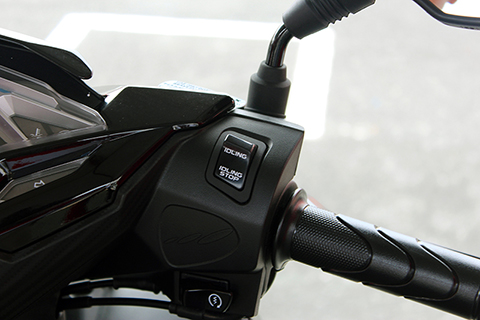 Another breakthrough that can be seen in the Click 125i is their ‘Idling Stop’ feature. When activated through the switch, the engine will program itself to automatically stop after three seconds of being idle, and will easily resume working when throttled. This works pretty well in traffic-heavy roads and highways such as EDSA. 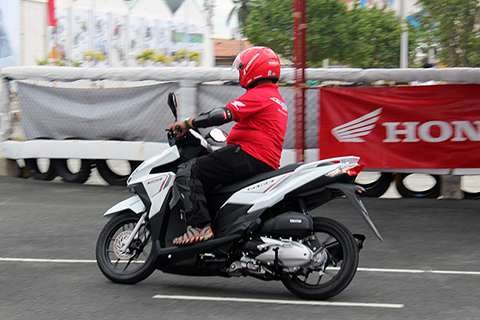 A member of the Honda PH team giving the media an orientation and demo of the motorcycle before the test ride.

We were only given five minutes to test the new scooter, and we definitely have to say that the motorcycle is pretty good to maneuver around the Safety Driving Center. It’s comfortable, and it feels lighter to drive when compared to other 125cc motorcycles. The engine starts smoothly when prompted, and definitely emits lesser noise. Its Combi Brake system is very responsive to levers when pressed, and the idling stop system is a really neat feature that we used. The kickstand also automatically turns the engine off when used as well.

A downside we initially saw is its LCD panel where the fuel meter is situated, which may not be legible enough in direct sunlight. The handles also offer little grip to those who sweat their hands profusely, but can be remedied by wearing gloves or replacing with a better one.

Available in Pearl Horizon White, Asteroid Metallic Black, and Candy Rosy Red, the Honda Click 125i will be available starting on Saturday, February 21, at dealers nationwide for Php87,900. For those who want to see this scooter up close and personal, Honda PH will be showcasing the new motorcycle in a grand public launch at the Trinoma Activity Center on the same day.