POCO has released its latest flagship killer, the F2 Pro. Coming in with top-of-the-line internals, high-resolution cameras, and a large battery with fast charging, the POCO F2 Pro is poised to take on the likes of Samsung’s Galaxy S20 series, OPPO’s Find X2 Pro, and more. However, when compared to lower-cost flagships such as Huawei’s P40, is the POCO F2 Pro still worth getting? Read on to find out! 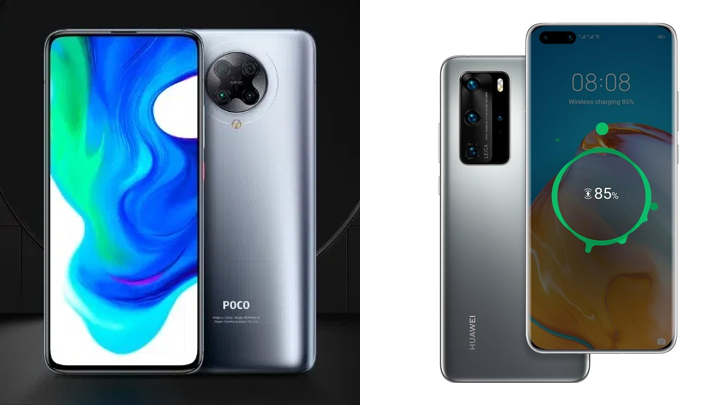 Advantages of each device:

Both the POCO F2 Pro and the Huawei P40 come with large Full HD+ displays, with the former being noticeably larger at 6.67 inches compared to the Huawei P40’s 6.1-inch display. The POCO F2 Pro is also HDR10+ compatible, with a higher 180Hz touch sampling rate, Widevine L1 certification, and Corning Gorilla Glass 5 on top to prevent scratches.

As for the selfie cameras, the POCO F2 Pro employs a pop-up mechanism to house its selfie camera, providing users a full, uninterrupted view. Meanwhile, a pill-shaped punch-hole cutout is located on the upper left corner of the P40’s display.

The F2 Pro and P40 sport the latest flagship chipsets from Qualcomm and HiSilicon – the Snapdragon 865 and Kirin 990, respectively. Both can handle anything its users throw at it, as well as 5G connectivity. However, the Snapdragon 865 is technically faster than the Kirin 990. Don’t give it too much thought, though, as both chipsets can handle any task you throw at it.

The POCO F2 Pro is being offered with the following memory configurations:

Meanwhile, the Huawei Philippines is offering the P40 with only the 8GB+128GB memory configuration.

If you want to get the best performance out of the F2 Pro, you’re going to need to get the highest memory configuration as it uses the much faster LPDDR5 RAM. The Huawei, on the other hand, did not disclose the RAM and storage type used in the P40.

Both devices run on Android 10 out of the box, with each company’s respective skins laid on top. Do take note that the POCO F2 Pro supports Google’s Mobile Services, while the Huawei P40 Pro uses Huawei Mobile Services.

While the POCO F2 Pro comes with a larger 64MP primary sensor, the Huawei P40 comes with a better ultra-wide and telephoto lens. Its selfie camera also features a higher resolution compared to the POCO F2 Pro. Do note; however, that resolution size is the be-all-end-all of cameras as the phone’s image processing software plays a significant role in the photo’s result.

Connectivity and Other features

The POCO F2 Pro is more feature-rich, thanks to its inclusion of a 3.5mm audio jack with Hi-Res Audio support, dual stereo speakers, IR Blaster, and an updated LiquidCool Technology 2.0 that offers better-sustained performance. It does, however, lack an IP-rating, which the P40 has.

While the Poco F2 Pro has not yet been released in the Philippines, it’s priced as follows:

POCO smartphones have always focused on several key components that they think their customers value more. However, this year’s F2 Pro model is a well-rounded device, that’s not only powerful but also feature-rich. Its cameras, display, audio quality, and other features took the phone as close to the flagship territory as it can. However, all these changes affected the price, as its no longer the affordable phone we’ve known to love.

Huawei’s P40, on the other hand, is the same P-series smartphone we can expect from Huawei. It fetches a reasonable price for what it has to offer. It’s a proper flagship phone, checking all the right boxes with little to compromise. Unfortunately, it doesn’t come with Google Mobile Services. While the HMS has been improving steadily over the years, it still lacks certain features that you’d want from your phone.

Overall, both devices are capable of providing its users with a flagship experience thanks to its large OLED based displays, up to date and top of the line internals, capable and versatile camera systems, and large batteries with fast charging. Since both phones are priced similarly to one another, it all boils down to the user’s ability to forego GMS and the device’s form factor.