Samsung recently released a new mid-range smartphone that has the chops to go toe-to-toe with other brands in the segment — the Galaxy A7 2018. This specs comparison, we’ll put it side-by-side with the VIVO V11 to see which one has the upper hand in each key smartphone aspects. Which one do you think will win? Find out below. 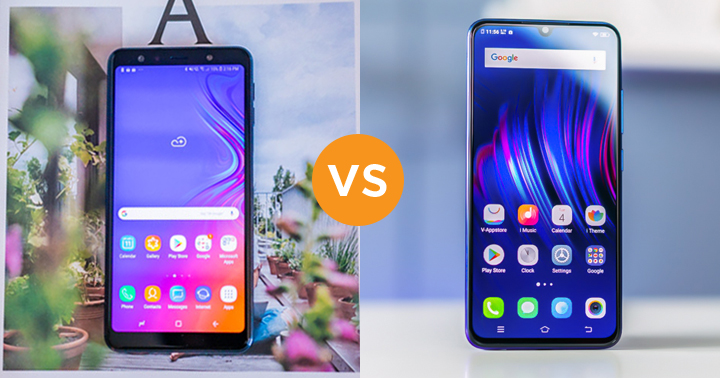 First, VIVO V11’s display, aspect ratio, and horizontal resolution are better than the Galaxy A7 2018. This means that users will enjoy watching and streaming videos with the former than the latter.

We tested both smartphones under AnTuTu’s benchmark application and they yielded impressive results. However, the VIVO V11 still got a higher score with 129,021 than Galaxy A7’s 120,100. If users want more CPU and gaming performance, they should choose the former than the latter.

The Galaxy A7 2018’s bread and butter is its triple rear camera setup which involves a 120-deg wide angle lens that the V11 doesn’t have. In terms of front camera though, the latter has the advantage as it has a slightly higher resolution than the former. Resolution is NOT indicative of camera quality, so we will have to wait until our evaluation of the Galaxy A7 2018’s camera is done. Stay tuned.

The V11 has a slightly larger battery capacity and features dual-engine fast charging technology. This makes it superior in terms of charging speed. Battery life, however is another unknown. We know how long the VIVO V11 can last, but we can’t say the same for the Galaxy A7 2018, so stay tuned for our full review.

To summarize, the V11 provides better overall performance, but the Galaxy A7 2018’s dark horse is definitely going to be its camera performance, so don’t sleep on it just yet.