Earlier this year, we reviewed the Samsung Galaxy S20 and described it as the balanced one in the S20 series with the right amount of exceptional features you can find in a flagship.

As Samsung freshly introduces its Note 20 line-up, let’s see in this specs comparison how the Galaxy Note 20 5G fairs against the Galaxy S20. 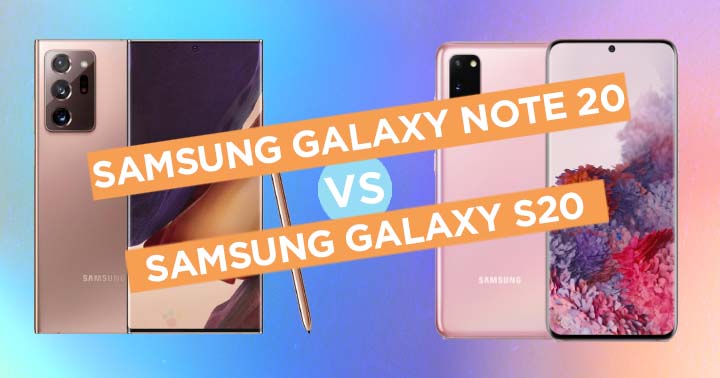 When it comes to chipsets, locally, both sport the flagship Exynos 990 processor.

These two power-packed devices are equipped with the same camera configuration. That’s a triple set-up at the back composed of a 12MP main, 12MP ultra-wide, and a 64MP telephoto lens. On their tiny notches reside their respective 10MP dual-pixel front cameras.

Expect an ultrasonic fingerprint scanner and face recognition for biometrics on both. And as for protection, both are equipped with IP68 dust and water resistance plus Corning Gorilla Glass 6 for the S20. It’s still undisclosed on what specific glass protection Samsung used for the Note 20, but there’s one for sure. Now the main selling point for the Galaxy Note 20 is the S Pen compatibility, of course.

Out of the box, these two Samsung devices run on Android 10 skinned with OneUI 2.0.

For battery, the Note 20 5G packs a larger capacity of 4,300mAh, while the S20 has a 4,000mAh battery with 25W fast charging. Both are supported with Fast Wireless Charging 2.0, and Wireless PowerShare.

The Galaxy Note 20 and S20 share a few significant similarities. They both have the same processor, set of cameras, software, and even IP68 rating. Now there are some notable upgrades on the Note 20 such as the larger display, bigger battery, and of course the advantage of having an S-Pen. You get those by paying the extra PHP 4,000. However, if you want to get the 5G connectivity, you’ll have to get it through a postpaid plan.

However, if you don’t really need those upgrades, the S20 is still a better choice with an outstanding QHD+ display that’s capable of 120Hz, plus, the option for a higher RAM variant and expandable storage up to 1TB via microSD card.