Our Internet is Fast, We Just Can’t Afford It

Earlier this week, we broke the story that NAIA Terminals are all getting 1Gbps WiFi, making it one of the fastest in any commercial terminals in the world. This brought up the discussion on why is the average broadband internet in the Philippines still the slowest in the region.

It has always been a normal feedback by any subscriber that internet in the Philippines is slow. This is supported by several studies and publicly available information from the likes of Akamai and Ookla which if often cited in news reports.

The latest report from Akamai puts this number at 3.5Mbps as of the first quarter of 2016. This pales in comparison with that of our neighboring countries like Singapore, HK, Taiwan and South Korea where the speeds are blazing fast.

Let’s take a step back and define the “internet” in this context. There are actually two modes when we talk of internet connectivity – one is mobile internet which we would normally refer to as 3G, 4G or LTE; the second one is wired internet which is normally delivered via DSL using legacy copper lines, cable internet and fiber connection which is becoming the norm. 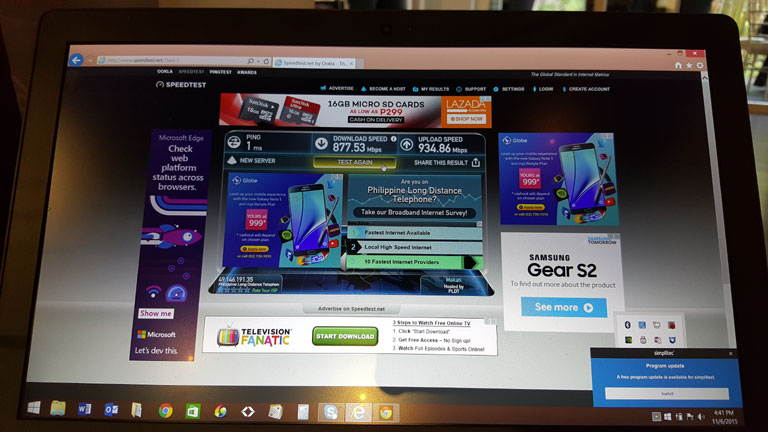 What I’d like to focus on in this article is the second mode which is the wired connection.

If you looked at the broadband plans of most of the internet providers are still offering 2Mbps or 3Mbps. These would normally be offered at Php999 to Php1,299.

In a 3rd-world country where majority of the population is below poverty and the purchasing power of the working-class Filipino is much lower than most other Asians, it would only make sense that new subscribers can only afford the base plan.

With majority of broadband subscribers only getting 2Mbps or 3Mbps, it’s no wonder why the average internet speeds is within the vicinity of this broadband plan.

However, for several years now, a number of ISPs are already offering fiber internet. They started offering 20Mbps, 50Mbps to 100Mbps connections but recently, the broadband plans have even reached 1Gbps. Of course, not all areas have fiber coverage and the first ones to get them are the more affluent subdivisions and condominiums.

Lately though, I’ve been getting feedback from a number of friends and colleagues that they are able to get fiber internet in the outskirts such as Valenzuela or Taytay, Rizal. My old apartment in Bangkal, Makati is also getting fiber this month (along Evangelista St., and up to 250 meters from the main line). I’m fortunate to get up to 20Mbps for about Php1,500 a month in that area (via Converge).

For most of the people who want faster internet, it’s just not available in their area. And, even if fiber internet is available, most people cannot afford to spend Php3k to 10k for 50Mbps to 1Gbps connection.

In reality, we already have very fast internet in the Philippines. It’s just that most subscribers cannot afford it.

The best and fastest way to take the Philippines out of the “slowest internet in the world” title is for ISPs to basically upgrade every subscriber who is on 2Mbps and just give them at least 20Mbps for the same basic fee of Php999. That alone would catapult the Philippines the the Top 10 Fastest Internet in the World. But that’s just my suggestion.

In a way, there is truth when people say we need more competition so we can get better or faster internet in the Philippines. A new player can come in and offer 20Mbps at Php999 and eventually existing players will follow suit. In fact, even any one of the existing internet service providers might just go crazy and offer these kind of speeds at base prices and we’ll see everyone else doing the same in less than a year.

There’s an asshole in this thread trying to play like genius, which I hate more than I hate my ISP. ?

In reality, fast internet is only available to major cities in the Philippines and not in general the whole country. If we really would like to make interney fastet and accessible to all Filipinos, then the government and the networks must also consider investing wired internet to rural areas.

I don’t really care if it’s expensive or cheap but for me i would be happy if the consistency and reliability of our internet connection is improved.

For those who are complaining, if you were given a chance to be an ISP provider, how much would you charge? Considering all of the infrastructures needed.

I agree with one of the comments that the real problem is the consistency and reliability.. Even in Metro Manila alone, 3g/H+/LTE/DSL speeds are still inconsistent. It’s really a challenge for ISPs to improve their services… But I hope that they’ll put more effort.

This term is not applicable in our generation.

LOL, Nice definition from WIKIPEDIA but the author is clearly using the developmental aspect of those words. It is not to be confused with the definition of the three world typology from the cold war. What a dimwit.

It’s not that “we can’t afford it”, it’s more of the price of having an Internet connection in the Philippines is too damn high. Considering the fact that Singapore and HongKong are two of the most expensive cities to live in, they offer cheaper and more consistent connectivity.

faster in “up to” . For example up to 10mbps but the actual speed is sometimes drop to 3mbps-7mbps. Can’t even reach 9mbps. My internet cafe plan is 10mbps from globe but i only getting 6-7mbps even at midnight and globe said it is acceptable speed. Even my PLDT ultera 3mbps plan getting 1-2mbps only. I remember when i called CSR about having 400kbps DL speed for 1 week they said it is acceptable as per minimum speed is 256kbps with 80% reliability. After that event i rarely call CS even my speed is dropping at 500kbps.

First of all, I wanna say congrats to a well-written article. It is backed up by actual prices of wired Internet services provided by our telecoms as well as consideration to the buying power of our fellow citizens.

I will also ask about your opinion regarding the archipelagic structure of our country in relation to how telecoms make their decisions to improve their Internet services. Do our telecoms have a hard time providing cheaper Internet because our country is made up of separate islands, or do they just have a profit-driven nature? Most of the example of countries that you stated are not archipelagic like Singapore. Although Japan is made up of islands too, the islands there are fewer and not vastly separated by water unlike the situation in our country.

I also have a follow-up question with regards to Mindanao and the Internet here.

We also discussed this in previous articles.

Why Internet in the Philippines is Slow and Expensive: http://www.yugatech.com/the-internet/why-internet-in-the-philippines-is-slow-and-expensive/

Why Your Telco Needs to Cap Your Mobile Internet: http://www.yugatech.com/telecoms/why-your-telco-needs-to-cap-your-mobile-internet/

So why is our internet plans much more expensive compared to our neighboring countries?

Also an Oxford coma would be helpful on the fourth paragraph, without it, it sounds like all of wired connections are just recently becoming the norm.

We answered it here — Why Internet in the Philippines is Slow and Expensive: http://www.yugatech.com/the-internet/why-internet-in-the-philippines-is-slow-and-expensive/

I have worked in a telecoms company for about two years. Technically in DSL, people mostly get the 999PHP a month mark which is true to your point if you put on average of all subscribers. I guess we should move our attention about our “real” internet problem is the stability & quality for both modes. Yes, we have LTE and Fiber technology that it is the same with other countries. The big question is the stability of the connection. As you may and/or may not read in fine print in all of the advertisement/contract on what is the guaranteed speed and/or also the limiter of a per day allocation if exceeded for DSLs. And for using the LTE while moving or just standing, you still get fluctuations from Mbps to just measely bps range. I really hope we could have the move of the stability than just getting the “upto **Mbps* part. I don’t mind not getting the Gbps speed (probably best for business purposes), it just a need for a user just getting a stable 3-5 Mbps 24/7 whether DSL or LTE.

Thailand is 10mbps for 1k or less a month

Sorry, did you mean change all mentions of “internet” to “Internet” in the body of the article?

Can afford faster speed but just not yet available in most area.

We wanted fiber, but both pldt and globe are not available.

Please do a little research before making false accusations.

Manila is not the only place where Fiber exists, we have 1Gbps here in Cebu mate for commercial, we also have 20-150 mbps for residential, via PLDT and Globe fiber. You just have to pay for it Abe is correct, you can go to HK subscribe for 100mbps at a price of 3mbps here in our country.

They provided it — check out NAIA Terminals with its 1Gbps free WiFi.

More like “Our Internet is fast, in manila only”

As much as I would like to believe in this “we can’t afford it”, the fact of the matter is that the prices for the plans offered by the current ISP’s are just way overpriced in our country.

p.s: I seriously would love to live in that world where an ISP would offer you 20mbps for 999 without caps.

Try Singapore or Japan. Some of our Filipino readers there subscribe to 100Mbps to 1Gbps for around Php2k.

In the 4th paragraph, we contextualized the “internet” as broadband or wired connections for the purpose of this article.

I am referring to this statement of yours: “100Mbps to 1Gbps for around Php2k”

Not sure if I personally offended you to deserve this kind of treatment but thanks for engaging in the discussion.