What to expect when Android One arrives in Philippines

We’ve reported on what Android One is all about and we saw the first family of devices launched yesterday. During this event Google also announced the pending arrival to our local shores. What should we expect from the tech giant when the said program arrives in the Philippines? 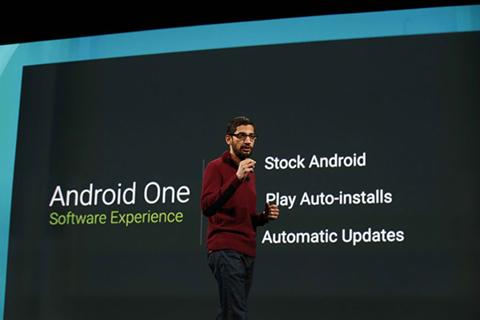 All of the Google updates, only faster

With their stock Android phones, users will get the latest updates straight from Google with all the newest features, up-to-date security patches, and provide secured backing up of files. Sundar Pichai, Google’s SVP for Android, Chrome, and Apps, assured us that Android One devices are one of the first in line to receive the battery-efficient Android L when it officially rolls out.

Since Google partered with India’s homegrown manufacturers with their first batch of Android One phones, it’s likely that they’ll be doing the same once they enter Philippine territory. This means that local brands like Cherry Mobile could be a potential partner – pretty much like how Cherry Mobile’s NVIDIA Tegra Note 7 arrived locally as a rebranded device.

International brands to join in on the fun

Google also announced that they will be working closely with other companies like Acer, Alcatel Onetouch, ASUS, HTC, Intex, Lava, Lenovo, Panasonic, Xolo, and chipmaker Qualcomm so we could expect more Android One devices made by these brands.

Should be priced around Php4K

The launched devices in India were priced at 6,399 Rupees which directly converts to Php4,624. We can safely assume that pricing in the Philippines will be the same or even cheaper in order to compete with already-existing local phones with heavier specs.

So far these are what were mentioned during yesterday’s launch. Are you excited to have an Android One device, carrying decent specs but complete with Google’s support? Or you’re still sticking with the same-priced devices but with better specs?

December has passed but no android one is still missing in action.

While it is good to have timely updates from Google itself, I have just realized that hardware support from Local companies leave a lot to be desired. Ofcourse it all boils down to how you handle your phone, but seriously you wouldn’t want to keep on going to a service center that doesn’t fix your phone right away.

will not buy an android one device until they have qHD screens and 2000mAh batteries, content with either chipset from mediatek or qualcomm. would be better if they have the newwer snapdragon 200’s. not a power user, just want a well balanced affordable phone much like the asus zenfone 5.

You can wait for their Android Silver, that is where they’ll focus on more midrange to high end hardwares.

this is better than buying china phone with their buggy OS that sends your details to china server. If the price is right buy this instead.