How to spot a fake Xiaomi Mi Powerbank

How to spot a fake Xiaomi Mi Powerbank

Xiaomi offers some of the most bang-for-the-buck devices, including powerbanks which often sell out in minutes. How can you tell if your Mi powerbank is fake or original? We run down the things you need to check to spot a fake Xiaomi powerbank. 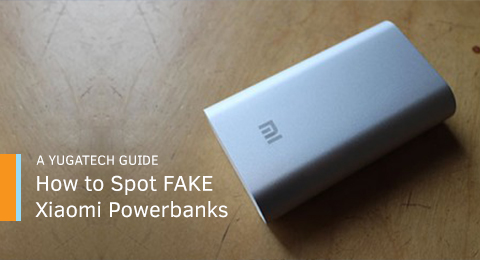 Xiaomi did attract a lot of potential buyers for a powerbank priced at less than Php700 for a 10400mAh, often triggering ‘Sold Out’ signs minutes after every single flash sale at Lazada.

With huge demand and low supply, the volume of fake powerbanks made to look like Xiaomi’s has increased as well. Here are a few tips to tell if that Mi powerbank you just bought is counterfeit or not:

1. Where did you buy your Mi powerbank? 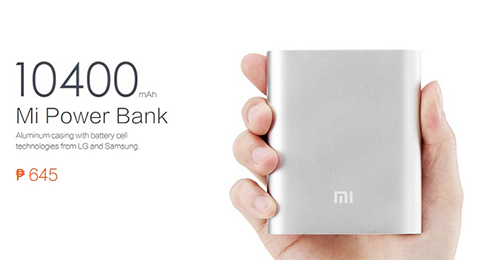 Before we begin spotting that little guy’s authenticity, let me ask you this: Where did you buy your Mi Powerbank? Keep in mind that while they may come cheap, original and authenticated Xiaomi products are only sold through one local distributor: Lazada.

Other than that, a few powerbanks sold in retail shop across malls and other online sellers are either parallel imports, or local outlets of which those powerbanks they hoarded during flash sales. (No wonder they’re selling out so fast!)

If it doesn’t fall under those places, there’s a huge likelihood that it’s fake. Those selling on sidewalks, flea markets, overpasses, malls or online(!) are 99% counterfeit ones, and they may charge you almost the same price as the genuine ones. We’ve seen a lot of them already while we scout various malls. 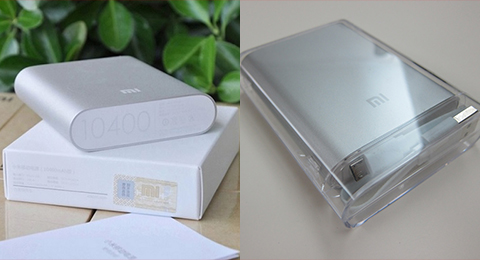 A first thing to note: Xiaomi powerbanks come in two styles of packaging: those that are directly put in a white cardboard box, and those that are packaged in a white envelope with a cylindrical plastic case, covered with yet another layer of paper. Both are considered genuine, and counterfeit merchants mostly replicate the latter.

If you ever receive a cylindrical case packaging, here’s how to check if it’s fake or not: The outer paper cover for genuine products are made from special material and are harder to tear apart, compared to fake ones where normal paper was used which makes tearing easy. Well, whatever type of packaging you receive, never throw them away. Here’s why. 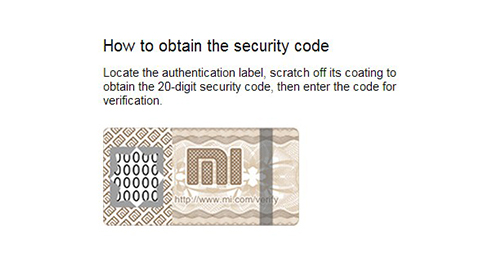 Sure, everyone can copy Xiaomi’s straightforward, ready for gift-wrap, no-nonsense packages, but what made it stand out from the counterfeit is the sticker it has. That sticker isn’t mostly seen on fake ones, but when they do, it can be easily verified for its authenticity. You can visit Xiaomi’s verification website to check the genuine status of your product.

The physical characteristics of a genuine Mi powerbank and those of the counterfeit ones significantly differ. Let’s break down the details:

Cord: The cord has a white color, and its male USB connector has a black interor. If your cord has an embossed Mi logo anywhere in it, it’s an early indication that it ain’t real. 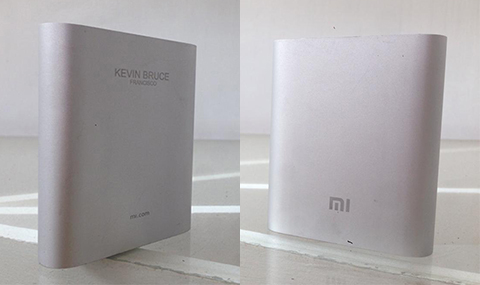 Outside appearance: As of this writing, there’s only one color officially introduced in the country which is aluminum silver. The upper and lower ends have a rich rice white color compared to milky white colors of fraudulent ones.  The text at one end of the powerbank exudes a light and clear look, while counterfeits often have this part printed dark and somewhat blurry. 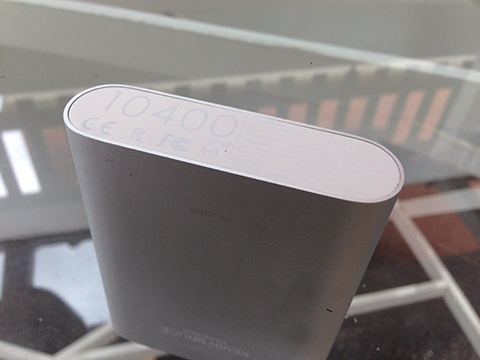 Lights: The LED Lighting are only appearing on the holes provided, whereas fakes directly light up the areas surrounding it. This is due to a kind of shading paper Xiaomi uses in its powerbank to transmit the lighting directly to the holes. USB Port: Along with a Mi logo on its aluminum case, genuine powerbank has a Mi logo inside the female USB port (encircled), too. The USB port also offers a rice white color, compared to plain white on fake ones. Counterfeits often have this Mi logo on the cords, which is already an early indication. This is reportedly missing from newer batches of 16000mAh ones arriving soon, but they’re still genuine. Battery: When you happen to disassemble the device, you’ll see that the batteries used are mainly sourced from LG, Samsung and other international brands. These are connected to the motherboard using nickel plates.

Fake ones, on the other hand, often use pink-colored counterfeit or Chinese-branded batteries and are connected to the motherboard using normal wires.

Despite the budget price tag, Xiaomi set a few tricks under its hood to let you know that you’re holding the real thing. Here’s a simple way to check: Charge your powerbank, then connect it to your phone. If both charge up, your powerbank is indeed genuine.

One feature phonies find very hard to replicate is Xiaomi’s Pass-Through Charging. The ability to charge your powerbank while you’re charging your phone thorough it is a feat seen in a few powerbanks, but definitely not on any fake ones.

It’s also worth noting that Xiaomi’s devices automatically charge your phone once it is connected, whereas nothing happens when you do the same with counterfeits. The LED lights up on genuine ones when the power button is pressed and held on while charging, and they light up again when you release your hold.

Counterfeits also have no short circuit boards, and they will appear as charging when you connect the powerbank to itself. When you try this with a Mi powerbank, nothing will happen. 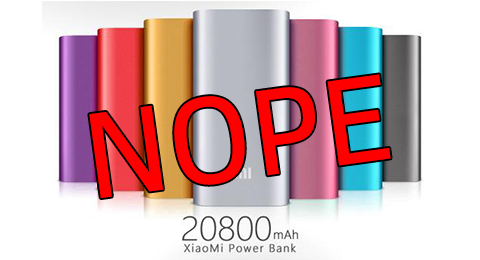 Last but not the least, please decline if anyone offers you to buy a 20,400mAh Mi powerbank. Xiaomi currently only offers the powerbank in  four different capacities: slim 5000mAh, 5200mAh, 10400mAh, and the 16000mAh, which is set to arrive this quarter. Those who are selling the 16000mAh one in the local market right now are, again, either imports from other countries or plainly fake ones.

And that’s it for our guide on what makes a Xiaomi powerbank authentic. Always keep a sharp eye on everything you buy, and be on the lookout for counterfeit ones as you may encounter them more than ever.