OpenSignal just released a report comparing the performance of the 3G and 4G networks of both Smart and Globe and the results are very interesting.

In terms of 4G (LTE) availability, Globe was ahead of Smart at 55.25% vs. 39.36%. LTE availability is the proportion of time that a user has a 4G signal over the total time it is connected to the carrier’s network.

When measuring 4G/LTE speeds, Globe came in with an average of 7.42Mbps while Smart went ahead at 9.87Mbps. This is slightly better compared to the over-all average of 7.27Mbps the Philippines got back in Q3 2016. 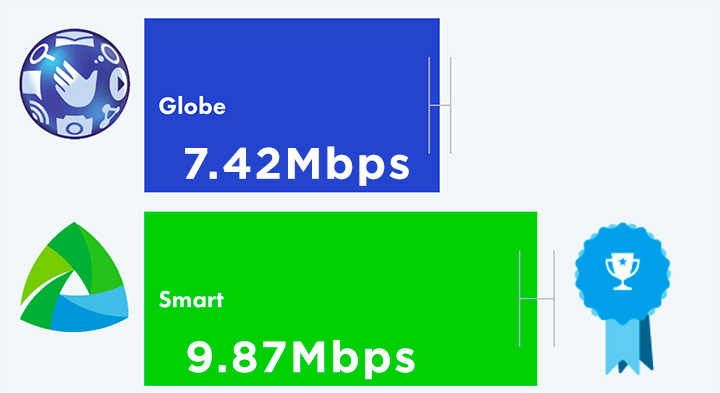 Measuring 3G speeds only, Globe and Smart almost tied at 2.24Mbps and 2.12Mbps, respectively. The discrepancy between the 4G and 3G speeds of the two networks is very significant, highlighting the importance of LTE frequencies to bring fast connectivity to users.

When over-all speeds are averaged between 3G and 4G, Globe and Smart are also tied – 3.33Mbps and 3.41Mbps. This measurement not only takes into consideration the 3G and 4G speeds on the network but also the time spent in those networks. This is the reason why Smart’s average dropped to 3.41Mbps despite getting a good 9.87Mbps speed on their 4G network – users spend more time on Smart’s 3G network than on their 4G network, skewing the over-all average towards the 3G speeds. 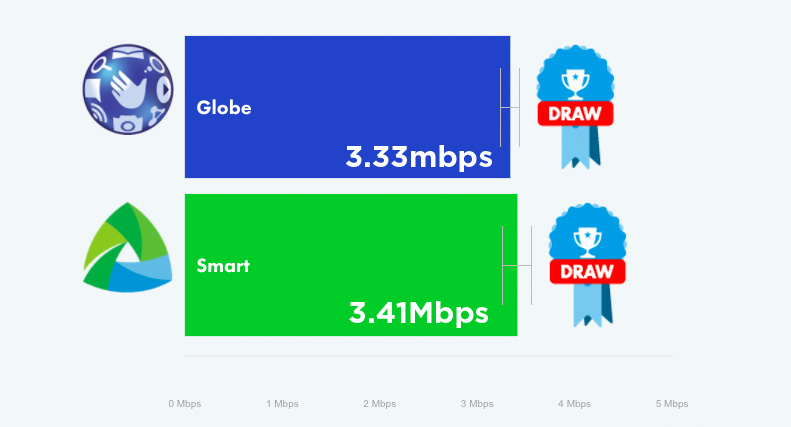 Lastly, OpenSignal also measure the latency of each network to see how responsive each carrier in both their 3G and 4G networks.

Latency, measured in milliseconds (ms), is the delay data experiences as it travels between points in the network. A lower score in this metric is a sign of a more responsive network.

For the 4G (LTE) network, Globe and Smart are statistically tied at 55.64ms and 53.32ms, respectively. These are pretty good numbers for a mobile network.

However, for their 3G network, Smart got a better latency performance of 157.2ms compared to the 190.4ms of Globe.

These results are definitely interesting and should give subscribers a better idea on the expected performance of their own respective carriers.

The average speeds, especially on 3G, are still very disappointing. There is good promise in the 4G networks, if you’re area has good coverage but based on the results of the survey there’s still a lot to cover.

Both Globe and Smart (PLDT) have announced aggressive expansion plans for LTE coverage in the Philippines, building more cell sites across the country and tapping into more frequency bands like the 700MHz they recently acquired from SMC.

We can’t deny that they are good network, but sometimes it depends on your location. For me when I’m away from the city, my smart network has no signal, but my Globe network have. My internet connection in globe is constant and I have a good connection.

I am VERY familiar with both Globe and Smart. I live in Bacoor Cavite. I have an Android and am only interested in personal service. I think Globe and Smart are in a fight to the death to see who can provide the WORST service. Right now they are gridlocked…. I have NEVER seen a worst ISP in my entire life !!!!! Thank you for your time !!!!!

Any other sim besides SMART or GLOBE that has no DATA CAPPING? Heavy youtube user here T_T

lol ‘network provider’. It depends, check the cell sites for each network on the internet, because sometimes 4G/LTE isn’t available. Therefore buying LTE broadband/Router wouldn’t be compatible
& could be useless.

In our area at province only 3g available signal on both globe and smart everytime i seach for the signal availability manually, but they have a very big difference in download speed, globe reaches more than 800kbps while smart reaches only at 100plus kbps early morning. Aloguinsan, Cebu, sana lagyan na ng 4g/LTE dito. At sana mag offer sila ng Promo na no data Cap, kasi yang 800mb per day, hindi manlang nakakadownload ng Movie. UNFAIR!!!

I both have the Globe and Smart Cellphone with unli internet. Before I connect my laptop to access the internet, I speedtest the two. A year ago, smart usually wins. But lately, the signal of Globe is more consistent. I also noticed that Smart is strictly implementing its cap while Globe is not.

John
Reply to  Will Gab

Where is the 3G vs. 4G that you’re talking about, it’s network vs. network. Get your facts straight.

Go to opensignal.com and you can check your area’s network coverage and signal. Input your location and choose which network provider you want to see. You can also either select just 2G/3G or LTE speeds, or both.

Go to opensignal.com and you will be able to check your area’s network coverage and signal level. Just input your address and choose which network provider you want to see. You can also either select just 2G/3G or LTE speeds, or both.

Go to the opensignal site and you will be able to check their your area’s network coverage and signal. Just input your address and choose which network provider you want to see. You can also either select just 2G/3G or LTE speeds, or both.

Seems the moderator won’t allow us to post links here. But for those who are asking the 2G/3G/LTE speeds in their area, just to go opensignal(dot)com and enter your network’s name and your location. You can be able to see there the upload, download, latency and signal strength in your area. You can select either 2G/3G or LTE speeds, or both.