With the split of Flash 3C from parent company Alcatel, the company is putting a lot of promise with their narrow product line. With only the Flash and Flash Plus product category, they are set to release two new models every year. That may not be a lot of terms of diversity but they’ve already established a rhythm and so far, the last 3 devices they released before the Flash Plus 2 made their mark in South East Asia.

For comparison, you can also read our full review of the Alcatel Flash Plus before proceeding with this one.

There is undoubtedly huge expectations with the Flash Plus 2 as its predecessor disrupted a rather crowded market by offering something substantial at a price point only local brands can match at that time.

In terms of design, the Flash Plus 2 is not far off from the original Flash Plus. It’s sleek and simple with a flat form factor and a two-color scheme. The Venus Gold unit that we have here has a flat black front panel and a light, almost pinkish, back panel. The other color variant is the Luna Silver.

With a 5.5-inch display size, the Flash Plus 2 feels just about right on the hands. It’s still usable with one hand with a comfortable grip. You may need to use both hands when you type an SMS though. The power button is on the right side along with the volume rocker, both of which are somewhat flushed towards the top corner. The placement is somewhat harder to reach when holding the device with one hand. The 3.5mm audio port is up top with the noise-canceling microphone while the micro-USB port is down below with the primary mic.

The back panel has a brushed-metal finish and has a removable cover that’s mostly made up of thin but solid metal alloy (which is not flimsy at all) infused with some polycarbonate material at the top and bottom end to allow for better wireless signal reception. Inside is a nano SIM card slot, a micro SIM card slot and a separate microSD card slot. Both SIM card slots support 4G LTE while the microSD card supports up to 128GB external storage.

For the 16GB model, usable space is only around 10.5GB which can easily be used up if you install a number of apps. During our test period, after installing 4 benchmark apps and 8 heavy games the remaining storage dropped below 500MB. While you can remove the back cover, the 3,000mAh battery is actually not user-replaceable. The battery is tucked into placed by at least 3 small screws. The loudspeaker is placed at the bottom end of the back panel. Despite the non-optimal placement, the audio is still loud and crisp, a bit tinny at times but much better than the old model. 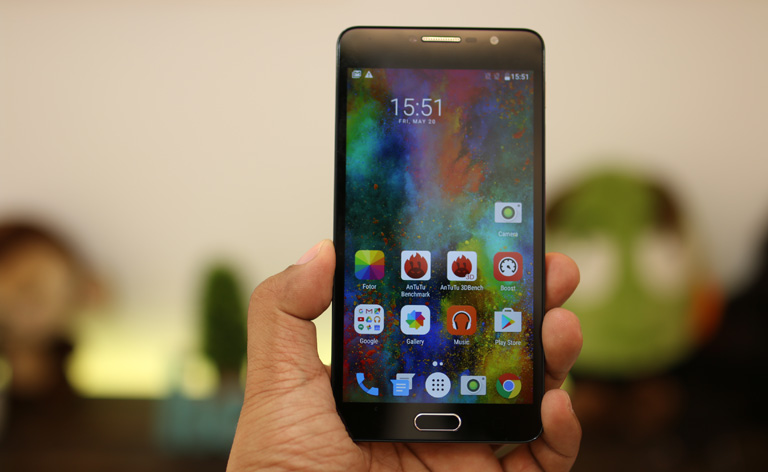 The side bezels are crazy thick to our liking, almost the same one we saw in any of the Zenfone devices that already came out. It is not like it’s a deal breaker but all those real estate are put to waste and does make it look less appealing.

Nevertheless, the screen looks nice, clean and crisp. Colors are fairly saturated bit not too vivid. You need to set the screen to around 70 to 80% to satisfy the brightness level. Viewing angles are wide and still accurate with no noticeable abberations.

We’re unsure if Flash used Asahi Dragon Trail or Gorilla Glass for protection but our simple scratch test showed there is some scratch-resistant coating (We reckon it could be an Asahi Dragon Trail just like the one in the Flash 2).

The handset comes with Android 6.0 Marshmallow right out of the box and pretty much vanilla-flavor interface. It’s snappy, fast and responsive although the 2GB of RAM can easily fill up with several apps running in the background. With only 10.46GB usable space, Flash did not have much pre-loaded apps except for a few small ones like 7am News, Fotor and Boost. The microSIM card slot supports up to 128GB of external storage and there’s USB-OTG as well if you want ad-hoc storage anytime.

It’s got a few tricks up its sleeve but the most useful one would be the double-tap to turn the screen on or off.

The Flash Plus 2 comes with a 13-megapixel rear camera. It has a nice aperture of f/2.0 and phase-detection auto-focus and Realtone dual LED flash. 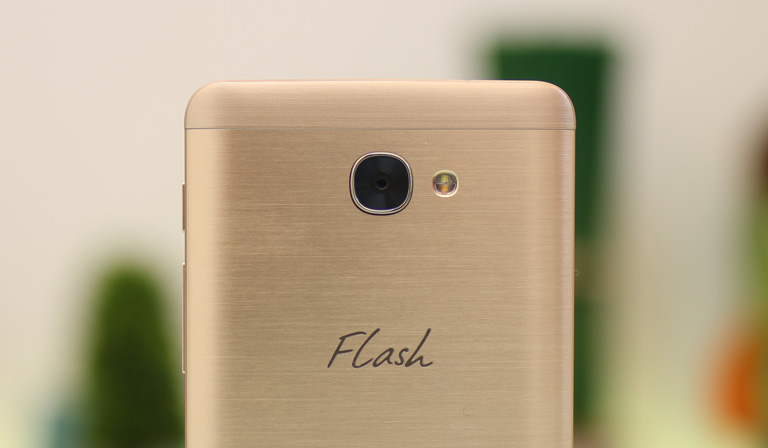 Photo quality is good to decent, has pretty decent low-light performance though some shots end up a bit blurry if you don’t have steady hands.

The camera can record videos up to full HD 1080p at 30 frames per second in 3GP format. There’s no slow-mo function or 60fps options.

There’s electronic image stabilization but we find it a bit aggressive and can sometimes makes the clips looking worse (notice some wobbling in the 1st two shots above).

The quality of the full HD video as shown in the samples above are quite grainy if you looked closely. Over-sharpening is also evident. Low-light performance isn’t any good either.

The device also features an FM Radio tuner and a HiFi DAC supplied by Asahi Kasei Microdevices. The AK4375 is a high performance 192kHz/32-bit advanced audio DAC for smartphones and high resolution portable players. With the right headphones, the DAC produces really good sound quality especially with playing lossless music or even hifi sounds on YouTube. It didn’t work with Spotify though and a close comparison with our HTC 10 BoomSound and Dolby Digital enabled, the latter produces richer sound and much louder over-all volume.

The Flash Plus 2 is powered by a Mediatek Helio P10 octa-core chip. While the reference chip maxes out at 2.0GHz for the high power cluster and 1.1GHz for the power efficient cluster, the one used in the Plus 2 has been slightly under-clocked to 1.8GHz and 1.0GHz in each cluster, respectively. 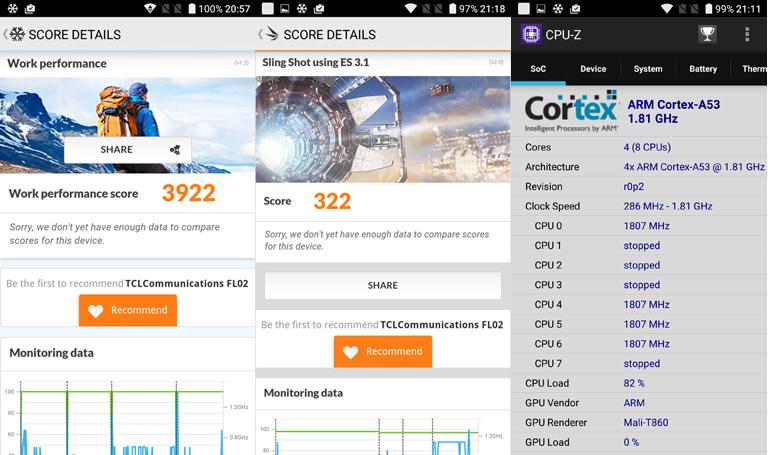 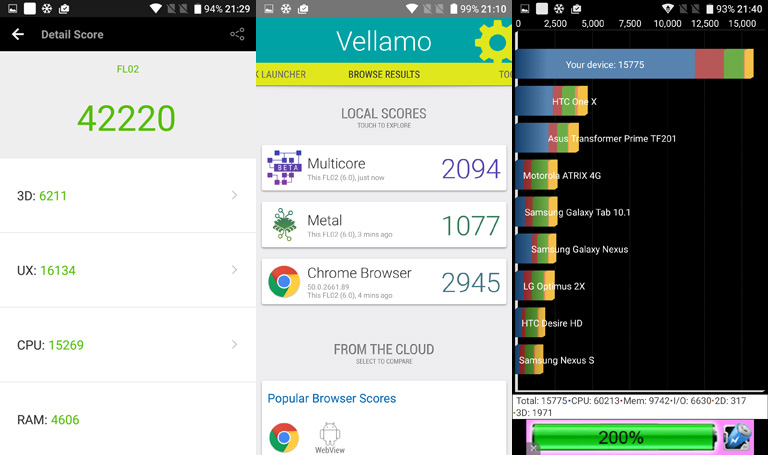 Here is a comparison with the original Flash Plus (our review unit had a 1.7GHz clock speed instead of the retail unit that maxed out at 1.5GHz).

Based on the comparison chart above, the older Flash Plus seems to be getting better scores. That could be due to the fact that the older chip uses 1.7GHz on all 8 cores while the Flash Plus 2 only has 4 cores running 1.8GHz and the other cluster at 1.0GHz. However, the results of Vellamo in Multicore test showed the Flash Plus 2 is better.

The device has decent gaming performance, not the best in terms of highly intensives ones but can generally do most of the casual games.

For high-performance games, there will be noticeable drop frames. Games are still playable but don’t expect much.

With its dual-SIM capabilities, the Flash Plus 2 supports one nano-SIM and one micro-SIM cards, both of which are LTE-capable. Connectivity is spot on with Bluetooth, WiFi and it even has Wireless Display built into the feature-set.

Call quality is excellent. Calls are clear and crisp while text messages are sent/received quite fast. 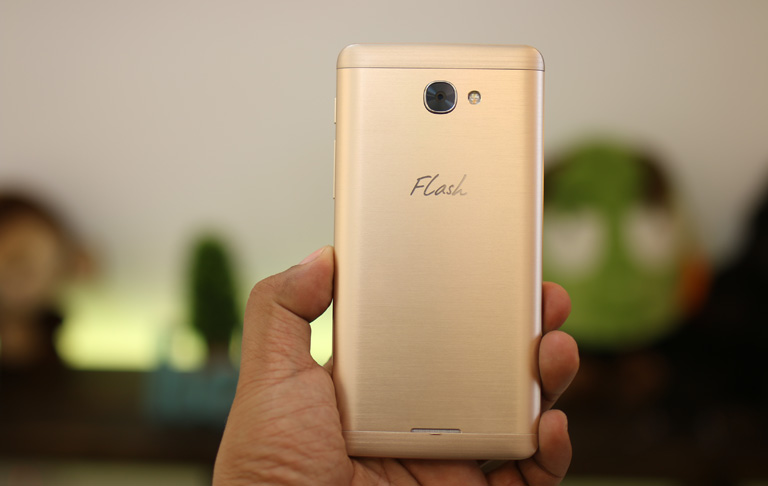 There’s some issue with GPS which is inherent with most Mediatek chips nowadays. Using Waze or Google Maps resulted in a slightly erratic location detection. 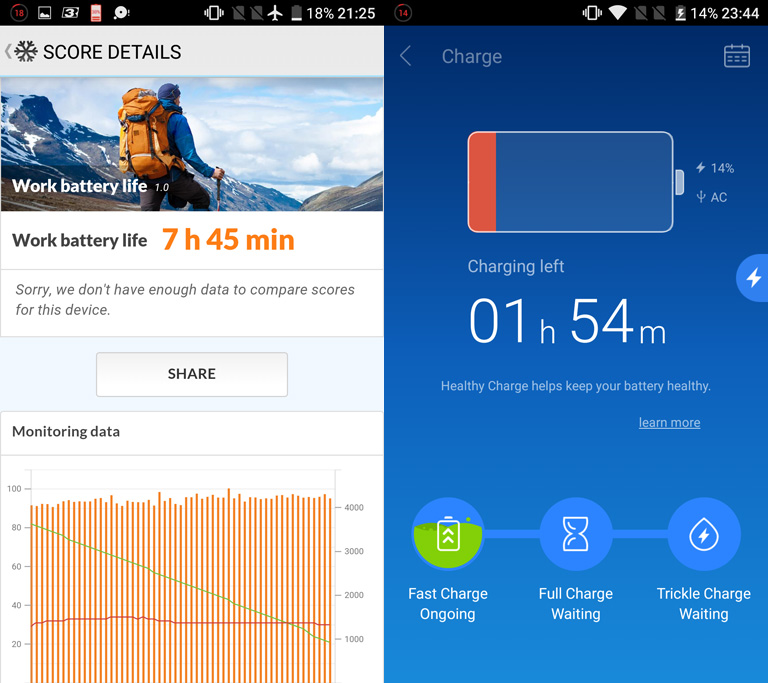 Based on our PCMark Battery Test, the Flash Plus 2 only got 7 hours and 45 minutes with 50% screen brightness and 0% volume. This is pretty much tied with the Alcatel Flash 2, Huawei G8 and ZTE Blade A711 — all of which also have a 3,000mAh battery. It’s still better than the Zenfone 2 Deluxe which only got 7 hours, 8 minutes for the same 3,000mAh battery capacity.

In our standard video loop test the Flash Plus 2 fared well, clocking in 11.5 hours on a full charge playing an HD movie at 50% brightness and zero volume in airplane mode.

On moderate use, the phone can last well over a day but heavy users might find to re-charge the device before the day ends.

Fortunately, there is some sort of fast-charging built into the unit. With the charger that came with the device, it can re-charge the phone to 50% is just 30 minutes although it will still need about 2 hours 10 minutes to get to full charge.

The Flash Plus 2 is a pretty decent device and ordinary mid-range device but its suggested retail price makes it stand out among an over crowded market of local and international smartphones. 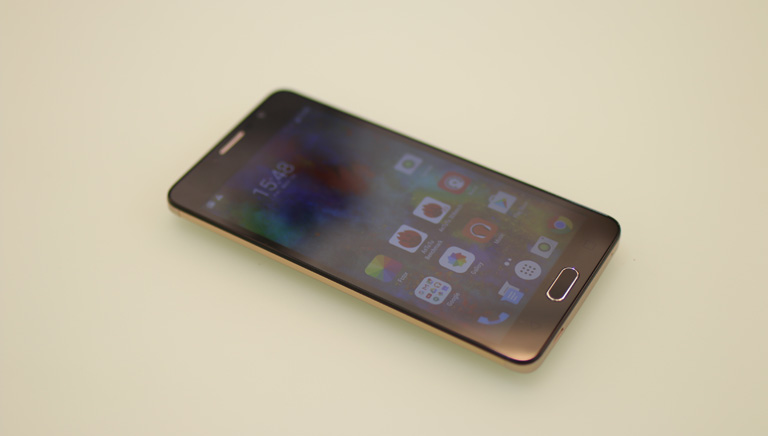 Flash took a hint at a number of features that needed to be improved from the previous generation that is the Flash Plus and went ahead to make them better — better material construction, better display, better camera, and an improved performance. If there’s one thing that didn’t impress, it was the drop in battery capacity thay certainly affected the device in that department.

All things considered, the Flash Plus 2 is a solid device and you’ll be hard pressed to find any other smartphone with these set of features in its price category.

The Flash Plus 2 has a suggested retail price of only Php6,990 for the 2GB/16GB model and available in either silver or gold colors (Flash states that the 3GB/32GB model will be released on a later date). Release date is slated in May 31 thru an exclusive Lazada sale.

What we liked about it:
* Good display
* Decent performance
* Better HiFi audio
* Very affordable
* Marshmallow right out of the box

What we did not like:
* Erratic GPS
* Thick side bezels

Thank you for the review. I bought the 3GB version about 2 years ago. Good phone. No complain. Any ways, I am looking for a new battery for the device but cannot seem to find any on lazada or any local smartphone shops in Baguio City. Do you have any idea where I could find a replacement battery for this device?

Is there a way to root this device for better performance?

front led indicator flash not working when I get a message

please don’t bother buying it. camera has a bug and after 5 updates. they didn’t fix it and it still in android 6.0 so all known fresh bugs are on this phone. I dont know why they dont seem to respond for the request of android 6.0.1. Im so dissapointed.

Where’s the back button? Left (like previous Alcatel Android phones and ASUS Zenfones) or right (like Samsung Galaxy phones)?

i set the screenlock pattern on, how do i disable it? thanks for the response