Here is why I’ve given Nokia a second chance

For the longest time, Nokia was on top of the mobile phone foodchain. We’ve said that over and over again in previous articles, and today, they may have been eclipsed by other better selling brands. To be honest, however, I think Nokia’s doing a good job in trying to reclaim its spot as the number one smartphone company.

Several months ago, my stand on Nokia’s decision on Windows Phone was a little shaky. I even wrote an article about it here, asking if I should give them a second chance. Now though, I’m starting to think Nokia can do this. 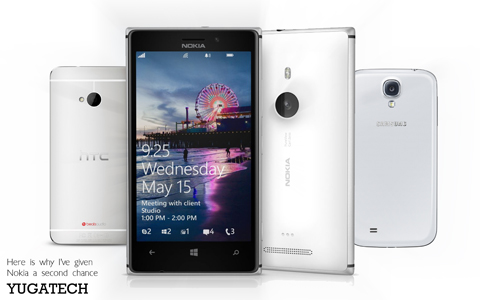 Through WP, Nokia is a king. It’s the company that pops into your head when you hear Windows Phone, and it offers the best hardware running the software. However, for Nokia, it’s going to be a slow journey, but I am positive that they’ll get there.

Nokia has a great design department & an amazing camera team. The software too is above average as they have made a good set of apps for Windows Phone – which lacks compared to Android & iOS. They have City Lens, Here, Cinemagraph & more, and I think it’s very cool. Also, it’s Nokia that’s doing most of the effort by releasing apps such as #2InstaWithLove – which calls out to Instagram to make an app for WP.

Windows Phone still adds a limitation to Nokia though, which is probably why Nokia has no 1080p phones and why the company had to make a separate Smart Camera app for the Lumia 925 to compete with present day smartphones

With all of that said, we’re just hoping Windows Phone’s next updates will be a lot better, since I think it’s very obvious – Nokia’s work can be a lot easier if Windows Phone didn’t hold it back.

Marketing is something I feel that Nokia has just learned, and it’s one of the most important elements in business success.  This is very clear in their new commercial for the Lumia, and I think it’s very clever. If only they got that to more TVs, maybe their sales would soar higher.

I was disappointed when we didn’t see the rumored EOS phone on Nokia’s event, but even if that’s the case, I was still glad. If you haven’t noticed yet, the Nokia Lumia 925 is still the company’s reply to the HTC One & the Samsung Galaxy S4 – and it still competes well.

The display can be argued with, but the camera isn’t  The Nokia Lumia 920 didn’t have a bad camera; it just didn’t do as great in daylight. Nokia aims to fix that with the 6th lens they’ve added into the 925. By keeping a relatively high megapixel count like the S4 and amazing low-light capabilities like the One, again – Nokia offers the best of both worlds.

Without everyone really knowing, Nokia’s very competitive. When the other phone manufacturers added a bunch of camera settings into their devices, Nokia made sure they had a counterpart – and they didn’t wait for any tweak from Microsoft. As for the CPU and the other specs, one might argue.

Windows Phone needs to have a great update to accelerate Nokia further. Apart from that, it’s also the game & app developers that needs a push to strengthen the ecosystem.

All of those things will make Nokia’s way to success easier, but even with those at a slow pace, I’m sure Nokia will do just fine.

I have learn several just right stuff here. Certainly worth bookmarking for revisiting. I surprise how a lot effort you place to create one of these fantastic informative web site.

Fastidious answer back in return of this question
with real arguments and explaining everything regarding
that.

And, let Samba know about the users with the commands:.
Locate the boundaries of the building where there’s a large
body of water. Both of these services are free, and
have Linux clients whose sole purpose is to map a dynamic URL to a static IP.

I love the Lumia line. But greatly disappointed by their after-sales sales support.
http://forums.wpcentral.com/nokia-lumia-920/227564-nokia-doesnt-care-philippines.html

Well, when my friend got her first Lumia phone, watching youtube with No Ads was really it for her… what do you think? http://gplz.com/2013/05/over-protective-google-on-the-youtube-for-windows-phone-8/

Google owns YouTube so why shouldn’t it be concerned when one of its major revenue source (ads) is being cut off?

Isn’t it hypocritical for MS to collect fees from Android vendors for old patents then cry foul when Google gives them a C&D order for not abiding by the terms on the usage of their service?

“Windows Phone still adds a limitation to Nokia though, which is probably why Nokia has no 1080p phones…”