Right around the mid-way point of May, Lenovo added three new smartphones to their portfolio. One of which is the Lenovo A526; a wallet-friendly dual-SIM smartphone with a 4.5-inch display and is powered by a 1.3GHz quad-core processor. Check out our full review after the break.

The Lenovo A526 doesn’t differ much from your typical entry-level smartphones in terms of design. It’s rather bulky and hefty for a phone of its size and the majority of its body is made of plastic. 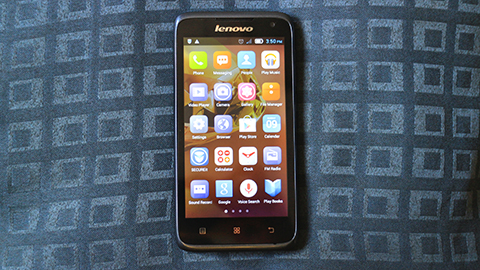 The front panel houses the handset’s 4.5-inch FWGA display along with three capacitive buttons at the bottom and an earpiece above, neighbored by a front-facing VGA camera.

The left and bottom portions of the A526 are devoid of any components, which leaves the top and the right flank to house the two ports for audio and charging and three buttons for power and volume controls respectively. 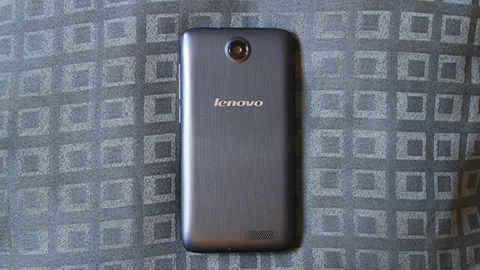 Flip the phone on its back and you’ll be greeted with a texturized back cover that hides the pair of SIM card slots, Micro-SD card slots and the A526’s 2000mAh battery from plain sight. It is also here that you’ll find the phone’s 5-megapixel rear camera, and the speaker grille which is situated at the bottom left corner.

As one would expect from an entry-level device, the Lenovo A526 only comes with a no-frill 4.5-inch FWVGA display. No additional layer of fancy glass laid on top of the actual screen, no IPS panel, just a modest screen that allows you to operate the phone using touch inputs.

Needless to say, the screen is not a strong suit of this smartphone. Viewing angles are bad, the colors are a bit washed out and outdoor legibility is sub-par at best. The only redeeming thing about the A526’s screen is its responsiveness to touch inputs, even at the corners. 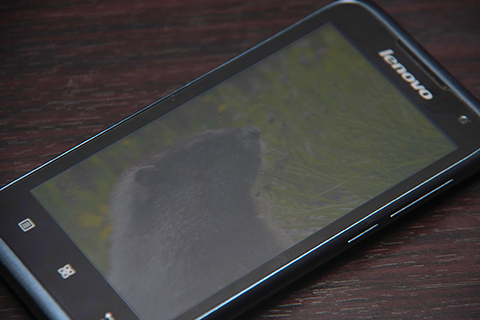 The good thing is that the audio was not as lackluster as the A526’s display. Whether the sound was coming out of its loudspeaker or through the headphone jack, the output and the quality was very acceptable.

Turning on the handset on for the first time, we were greeted with a skinned version of Android Jelly Bean which looks somewhat similar to the one we saw on the K900 and other recently launched Lenovo handsets. 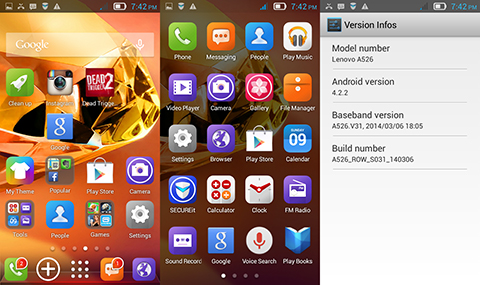 To our surprise though, the A526 is loaded with a number of third party apps that we don’t usually see on handsets. This can be viewed as a good thing and bad thing since these pre-installed apps eat up most of what is left of its measly 4GB internal storage. On the other hand, some users may appreciate these add-ons because they won’t have to download it themselves.

In addition to the pre-loaded third party apps, Lenovo also slipped in a few of their homebrewed apps like SHAREit, SECUREit and SYNC it in to the handset. We imagine that most users won’t mind having these apps on their phone since they are useful compared to other bloatware that other companies add to their devices. However, the fact remains that it takes a bite out of internal storage, forcing users to invest on a Micro-SD card when purchasing the handset. 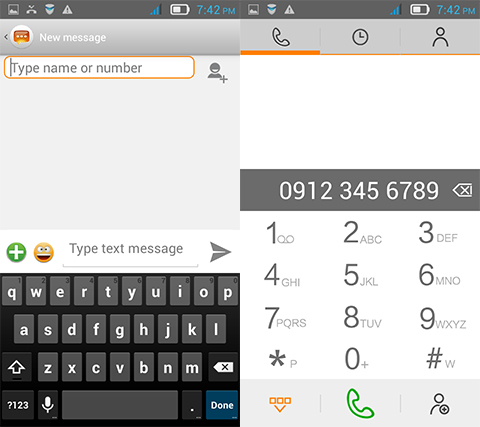 As far as the UI is concerned, the overall feel remains similar to stock Android despite of the a few aesthetic changes that Lenovo made. Although the toy-ish icons didn’t appeal to us that much, we’re content with the fact that things are where they’re supposed to be and it didn’t take long before we get accustomed to the subtle alterations in the UI.

Backed by a 1.3GHz quad-core processor from MediaTek with 1GB of RAM, the Lenovo A526 was able to breeze through basic tasks without laboring too much. During our time with it, we also tried playing Dead Trigger 2 on it, and although the game was not as smooth as we would hope for, the game was very playable for the most part. 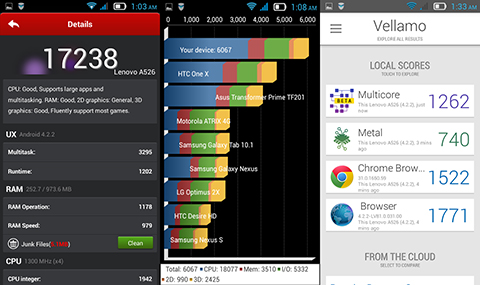 We’ve already had a few encounters with the MT6582M chipset that powers the A526, therefore we already have an idea on what to expect from it in terms of benchmark scores. 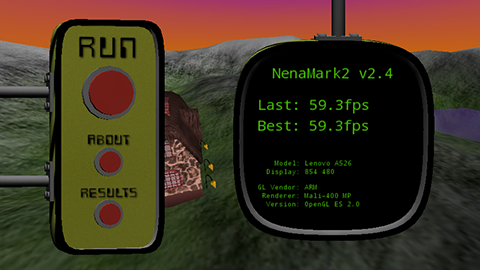 As expected, the scores that we got from the A526’s chipset is at par with the other handsets that has the same processor. Here’s the breakdown of its benchmark tests results:

Like the A526’s display, imaging and video recording also leave a lot to be desired. It’s bad enough that the resolution is fairly low in today’s standards, but the lack of autofocus on both the front and rear snappers and the absence of an accompanying flash on the back side made it hard for us to get a decent picture out of the handset.

Equipped with a 2000mAh battery pack and a rather modest display, the Lenovo A526 gave us a pretty decent mileage-per-charge. On a light-to-moderate usage, the phone lasted for more than 14 hours on average.

Here’s the result of our battery test: 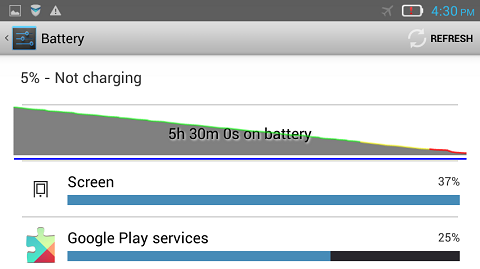 Despite of its relatively cheap price tag (Php5,999), we still feel that some consumers, especially those who are very paricular with the specs, will have a hard time grabbing the Lenovo A526 off the shelves because there are other handsets in the market with roughly the same price tag but has a better specs than this. 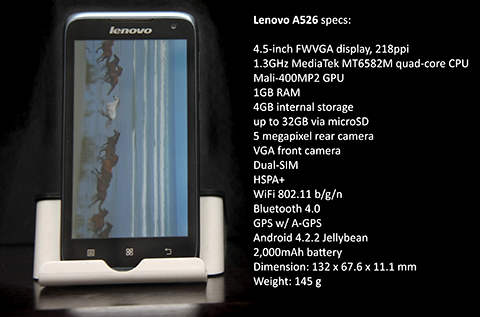 However, the not-so-nitpicky crowd should give this handset a second look because it offers decent battery life and good overall performance without breaking the bank.

The Lenovo A526 is now available in the country and is being retailed for Php5,999.

Remarkable! Its actually awesome piece of writing, I have got much clear idea on the topic of from this paragraph.

Breakfast seems like a huge challenge, since it is so common in our society to eat toast and cereals,
however there are some tasty options that
are child-friendly. The Japanese speaking searchers spent 43% of their 391 thousand searches
looking for specific gluten free foods. The author of this GFP article loves fruit and
realises that this affair was fostered in childhood where his
father grew many varieties of fruit trees in his home yard.

Have a look at my web blog … Gluten Free society

We stumbled over here different page and thought I should check things out.
I like what I see so now i’m following you. Look forward to looking over your web page repeatedly.

Thanks for sharing your thoughts about bouquet. Regards

After I initially commented I seem to have clicked the -Notify me when new comments are added- checkbox and now each time a comment is added I recieve
4 emails with the same comment. Perhaps there is a
way you can remove me from that service? Thanks a lot!

Hurrah, that’s what I was seeking for, what a material! present here at
this weblog, thanks admin of this web page.

Interesting blog! Is your theme custom made or did you download it from somewhere?
A design like yours with a few simple tweeks would really make my
blog shine. Please let me know where you got your theme.

It is efficiently created, with a weight of 135 grams and measurement of 115.
For example as soon as a movie of the popular celebrity has been released you
would see the youth following the same by looking at the photos of the Hot
celebrities wallpapers. Have you ever wanted to download music, but you didn’t know how.

This way, you can make fast World Of Warcraft gold. This is strictly pretty complex to purchase a really finished assortment of special secrets pertaining to GTA,
regrettably a large numbers of web-sites they’ll take advantage of a carry released
report nevertheless as you manifested on their own inside your Search engine
final results aided by the guaranteeing showing everyone undergo any unhealthy let-down. Yet there are millions of women, who for various reasons, have
chosen to stay with a cheating mate.

You have accomppished what some people have failed to-do previously.
Well-done on creating an outstanding article that’s completely unique and
unbiased. Exceptional in this time!

They are looking for one or other options that can help them reduce their bylk of weight.
Many diet pills can undermmine your health, becauuse physical discomfort aand lead
to disappointmjent when you regain weight soon after you lose it.
The more processeed your snack has been, the more harm it can do to your body shape.

There is definately a great deal to learn about this subject.

I love all the pointrs you made.

I am truly thankful to the owner of this website who has shared this impressive article
at here.

my page Book your Disney vacation & receive an in room credit

Appreciating the time and effort you put into your blog and detailed information you present.
It’s good to come across a blog every once in a while that isn’t
the same old rehashed material. Wonderful read!
I’ve bookmarked your site and I’m adding your RSS feeds to my Google account.

For example, you may want to return results
only from the site of The Times. Secondly, your Google Page
Rank is obviously an indication of the number of websites
linking back to yours but also an excellent indicator of how your website is performing on search engine
results pages and what type of presence you have within you
industry sector. The new Google Penguin algorithm update has
emphasized the importance of a web content writer in generating good website content and in article marketing promotional campaigns.

How the hell is this wallet-friendly? Unless you’re a paid hack?

Hi, I wish for to subscribe for this web site to obtain hottest updates, therefore where can i
do it please help.

And still this phone is in Android jellybean 4.2.1? Almost all Lenovo phones are not updated with kitkat. only a selected few