Recently, the new Nokia 7.1 smartphone was made official, so I want to see how it would fare with another device carrying the same processor. Thus, I’ve matched it with the ASUS ZenFone Max Pro M1. Do you want to see which one would come out on top in this specs comparison? Keep reading below to find out. Let’s start!

Author’s Note: I’ve chosen the 4GB + 64GB variants of both smartphones to match their performance. 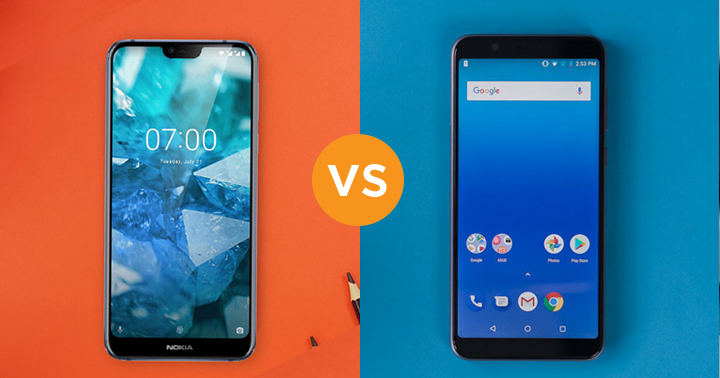 ASUS ZenFone Max Pro M1 is the company’s main contender for the budget mid-range segment. It sports a 6-inch display with 2160 x 1080 resolution, a Snapdragon 636 processor, a 4GB RAM, a 64GB internal storage, a 16MP + 5MP dual rear cameras, an 8MP front, and a 5,000mAh battery with flash charge.

Let’s start with their displays. The Nokia 7 may have a slight disadvantage in size compared to the ZenFone Max Pro M1, but it makes up for its higher aspect ratio, horizontal resolution, and pixel density. Not to mention its HDR 10 support and Gorilla Glass 3 protection. Overall, the former is the best pick when it comes to viewing experience especially when users are streaming videos on Netflix.

There shouldn’t be any visible difference in both smartphones’ response rates when they are tested in real time. The only difference in this aspect is Nokia 7.1’s Android One (stock) OS and ZenFone Max Pro M1’s Pure Android (almost stock) OS. Personally, choosing between their operating systems will depend on the user’s preference.

In terms of cameras, the ZenFone Max Pro M1 comes with a higher main rear camera resolution but the Nokia 7.1 has a wider main rear and front camera apertures. To simply put, the latter can produce brighter photos given that they are tested in the same conditions. Check our sample photos for the ASUS ZenFone Max Pro M1 here.

The ZenFone Max Pro M1 carries a larger battery capacity than the Nokia 7.1 The former also has a flash charge technology. We don’t know how long the latter will last but we’ll update you guys once we get our hands on the unit.

Users should go with the Nokia 7.1 If they are:

The ZenFone Max Pro M1, on the other hand, would be a good pick if users are:

What do you guys think of this specs comparison? Let us know your thoughts in the comments section below.

I certainly would not pay 22K for Snapdragon 636