We got another dual-SIM contender in the form of a 4.5-inch handset that goes by the name of 8.12. Check out our first impression of O+’s recently unveiled smartphone after the break.

Although majority of the 8.12’s body is made of plastic, the phone doesn’t look or feel cheap. It bears a striking resemblance to some Sony Xperia handsets with its plastic make and simple design layout. 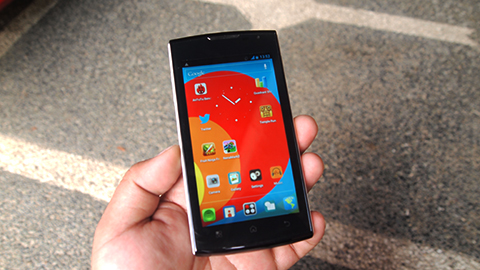 It’s 4 and half inch display features a qHD (960 x 540) resolution which looks decent enough for the most part. Sitting above its screen is a VGA front facing camera and a few sensors. One of these sensors is responsible for the phone’s unique feature called the Air Shuffle, which allows users to flick through songs or images without actually touching the screen.

A quick tour of the phone will reveal the two ports at the top namely the Micro-USB and 3.5mm audio port, volume rocker on the left and power/sleep button on the top right. Head on over to the back side and you’ll be greeted with a slightly protruding 8MP camera with its flash. There’s also a small opening way below the camera for the phone’s loudspeaker. Underneath the overlapping back cover is the handset’s 1850mAh battery with two SIM card slots which sits right above it. The 8.12’s inside is a familiar sight to entry level fans which includes a dual-core 1GHz MT6577 processor, 1GB of RAM and a standard 4GB storage. It currently runs on Android Ice Cream Sandwich, but is said to be upgradeable to Jellybean in the future.

We must say that the O+ 8.12 is one of the more decently built smartphone from their lineup and the addition of the fancy Air Shuffle feature differentiates it from its competition. It has the looks, we’ll give it that, but we don’t expect consumers to get this at Php11,995 especially when there’s a lot of other cheaper handsets that features the same specs. Maybe it’s still too early to call at this point especially because we haven’t spent enough time with the handset. Catch our full review after a couple of weeks and see if there are enough reasons to get this smartphone over its competition.

I really want to try this phone 8.12 but as of now i am still thinking if it is worthy to have this phone. how about the service center?I dont want to experienced again what i have in Cloudfone. They have very poor technical support. I think mostly who buy this phone experienced technical problems.and i experienced that already because my sister bought one a week ago. and it has defects. Not to criticize but just a sort of warning if you might want to buy phones from cloudfone.

Hello there, just was aware of your blog through Google, and found that it’s really informative. I’m going to be careful for brussels. I will be grateful if you happen to continue this in future. Lots of other folks will probably be benefited out of your writing. Cheers!