Two of the biggest companies in mobile communications have launched their own flagship smartphone. Can’t decide whether you’re Team Samsung or Team Sony? We’ve compared the specs of both devices side-by-side! 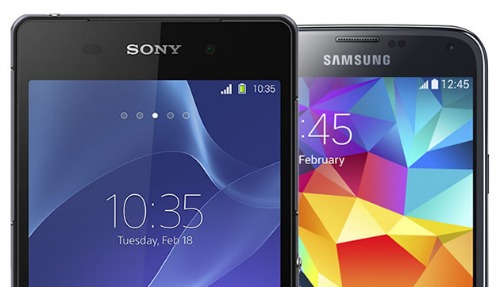 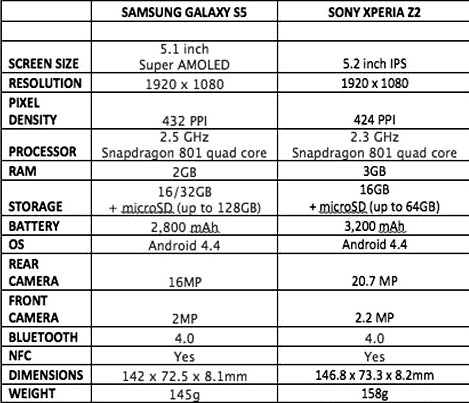 As you’ve seen on the data above,  Galaxy S5’s display size is almost identical to the Xperia Z2. Both have Full HD screen resolution, but the S5 has a higher pixel density. The Z2 also sports the company’s Triluminos display, X-reality technology, and Live Color LED for a wider color range and greater detail. Its competitor, on the other hand, features a bigger-than-before Super AMOLED display.

The Qualcomm Snapdragon quad-core processor is almost the same for both smartphones. For the memory, the Xperia Z2 one ups the Galaxy S5 with an extra 1GB RAM. Samsung’s internal memory comes in two variants — a 16GB and a 32GB one, in contrast to Sony’s 16GB model only. We have more battery life with Sony, but the Galaxy S5 has its integrated battery-saving mode, so numbers aren’t really that reliable for this part. Lastly under the hood, we both have Adreno 330 GPU and Android KitKat running.

The imaging performance of Xperia Z2 comes with the same f/2.0 aperture, 1/2.3-type Exmor RS for mobile CMOS image sensor, G Lens, and BIONZ mobile image processor as the Z1. The new addition is that it can now capture 4K videos and has its own software-based image stabilization called SteadyShot. Meanwhile, Samsung’s 16MP camera has better autofocus and 4K video recording that takes sharper photos than its predecessor.

In terms of features, the S5 now has a fingerprint scanner like the iPhone 5S and ventures into the fitness trail with its heart rate monitor. TouchWiz is also facing a few upgrades. New icons and design elements can be found, and it also features the My Magazine news reader that can be accessed with a swipe. One of the important things to note is Samsung’s ability to get data through both 4G & WiFi simultaneously with the Download Booster. One thing is common on both handsets, though, and that is their water- and dust-resistance.

We’re all waiting for the local pricing…

It’s just a matter of time before these two flagship models get their respective local prices in order for you to judge what’s better. But as of the facts that we have right now, where would you place your money if you were to choose?

I’d go for the S5. Swappable battery is fine with me. Fingerprint scanner is a win too. But seing these two, i think my G2 would be just fine until next year or I will have to see G3.

Have you heard about the ‘KnockOn’ feature of LG’s latest gadgets? It’s truely genius! bd