In this episode of specs comparison, we’ll be putting Samsung’s newest flagship smartphone — the Galaxy S9+ side-by-side with the Google Pixel 2 XL to see which one is the better pick in key aspects. Let’s start! 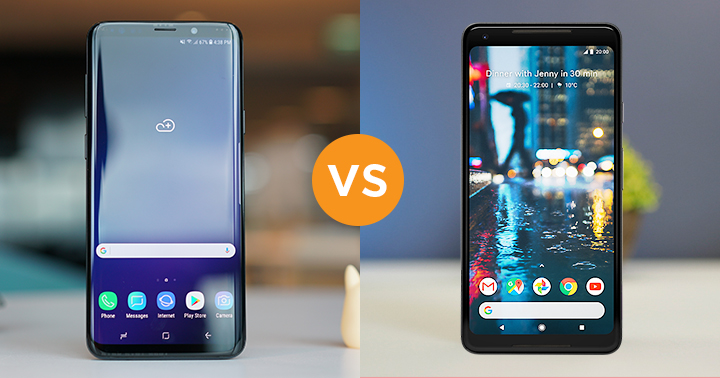 Compared with the S9 vs Pixel 2 that we made, the display specs for the Galaxy S9+ and Pixel 2 XL are close to each other. Both smartphones provide good viewing experience with the former having a slight advantage.

Based on the clock speed of the processors, the Galaxy S9’s Exynos 9810 has the upper-hand with its 2.7GHz custom CPU as compared with Pixel 2 XL’s Snapdragon 835. However, it’s not all about clock speeds so we’ll have to wait for the result of the AnTuTu benchmarking test scores and real-life usage to see which one really has a better performing CPU.

The GPUs of both devices provide excellent gaming potential in which users won’t need to worry about playing light-to-heavy graphic-intensive games at the highest settings. We’ll know who has a better performing GPU once we get the benchmark scores of the S9 in the coming days.

The Galaxy S9+ has a dual camera setup as compared with the Pixel 2 XL but that does not mean that we should count the latter out. We can’t say much about this aspect for now but we will be releasing our sample shots for the S9+ in the coming days so stay tuned.

The Pixel 2 XL to has a slightly larger battery capacity as compared with the Galaxy S9+ but it lacks the wireless charging that the latter has. As of this moment, we still don’t know who has a better battery life since we have yet to test out the former’s battery performance on PC Mark’s battery test. We will be updating this comparison in the coming days.