After spending an ample of time with the Sony Xperia ZL, it’s now time to delve deeper in to this 5-inch handset and see if it has enough fire power to be in the same league as its glass-backed sibling the Xperia Z.

Technically speaking, there isn’t much of a difference between the Z and ZL. Apart from the battery capacity, both possesses identical configuration on almost all aspects (display, camera and internals). Therefore most of the things we’ve mentioned on our Xperia Z review holds true for this handset. 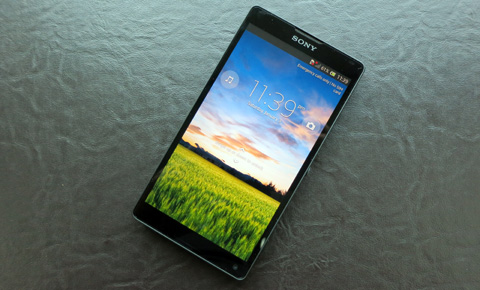 This begs the question, why make two identically-spec’d handsets? In our opinion, it all boils down to not putting all the eggs in one basket. The Xperia Z is unlike any handset we’ve seen from Sony’s stable (in a good way). But despite being one of the most gorgeous looking handset, the Japanese firm needs to have a good fallback in case it didn’t turn out the way they’ve expected.

So in essence, Sony is positioning the Xperia Z as the franchise’s centerpiece, at the same time they want to be able to cater to consumers who doesn’t have a thing for fancy glass-backed handsets or doesn’t care for the IP-certification of the former.

There’s no denying the fact that both the Z and ZL’s crowning glory is its pixel-packed 5-inch Reality Display. Although I’m still not totally swayed by the whole 5-inch FHD idea, I must say that there’s a good reason for all the hype that these handsets are getting as the ZL’s screen is nothing short of stunning. 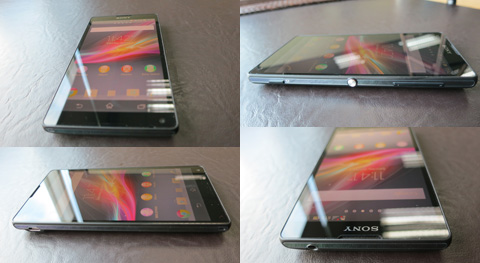 Having the same display characteristic as the Xperia Z, the result that we got out of the ZL’s screen fared no different from the one we had with the former. It produced outstanding details and good contrast thanks to Mobile Bravia Engine 2. Sadly, it too suffered from low brightness and subpar viewing angles that has plagued its glass-backed sibling.

OS, UI and Apps
Another trait that Z and ZL shares in common is the software. The latter also sports the new straightforward Xperia UI laid on top of Android Jell bean (4.1.2). For a closer look at the revamped UI and its features, we suggest to go through our Xperia Z review.

Now that we have that squared away, let’s look into other software features that were not mentioned during our Xperia Z review. 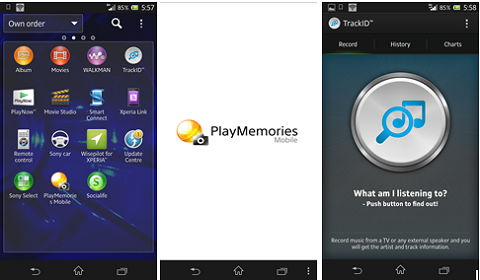 In addition to native Google apps and popular third-party apps, the Xperia ZL also comes preinstalled with a handful of home-brewed apps that expands its functionalities and makes it easier for the phone to interact with other devices.

We picked two apps out of the bunch which has become a daily driver when we were using the ZL. The first one is an app called Smart Connect, which is a highly-customizable app that allows users to set certain phone functions that can be automatically triggered by time, an accessory (NFC SmartTags) and/or another device. Just to show how it works, here’s a quick video demo:

Next up is the Remote Control app that makes use of the ZL’s IR blaster to turn it into a universal remote control for a variety of electronic devices. Setting it up can be done in a jiffy thanks to its easy-to-follow instruction. Moreover, users can assign the ZL to multiple devices and switching from one device to the other is just one flick away.

Multimedia and Camera
One of the things we’ve come to expect from such a pixel-packed display is that it’ll be a perfect tool for watching high-res movies on the fly. Unsurprisingly, Xperia ZL didn’t disappoint even for one bit in this category credit its 1080p Bravia Mobile Engine 2-backed display. The speaker is also commendable as we didn’t feel the need to cup our hands on the back of the phone just to hear the words clearly.

Shutterbugs out there eyeing this handset will be delighted to know that the Xperia ZL also comes with the same 13-megapixel, Exmor RS-based snapper as the Xperia Z. Along with the hardware, the ZL also possesses the software that allows it to shoot in HDR, 10fps burst mode and Sweep Panorama. Here are some of the images captured using the Xperia ZL:

Note: Some of the images are scaled down to fit the max resolution of our tool. If you’re interested to see the images in full res, you can go to this link.

The camera app is also packed with several nifty customizations which allow users to be more creative with their composition. However, if you’re the point-and-shoot type, there’s a Superior Auto Mode (default mode) that should get things done for you shot after shot.

Even though the ZL’s camera is one of the best we’ve seen on a smartphone, there’s still work to be done in terms of keeping the noise level down on the images. In most cases, the 13MP camera was able to nail the perfect shot, but there are times when the pictures suffer from unnecessary noise even in broad daylight. Launching the camera is also bit slow which can lead to a missed opportunity.

Recording video is also great with the Xperia ZL. On top of having the ability to capture 1080p clips, the camera can also shoot videos in HDR and gives the user the ability to take 1MP pictures while recording a video.

Performance has never been an issue during our time with the Xperia Z. It was able to breeze through all the basic tasks we’ve subjected it to without breaking a single sweat. It’s pretty much the same when used for resource-heavy tasks like playing Asphalt 7. However, we noticed some momentary lags during transitions and loading takes a bit longer than usual, but everything was flawless during the race itself. 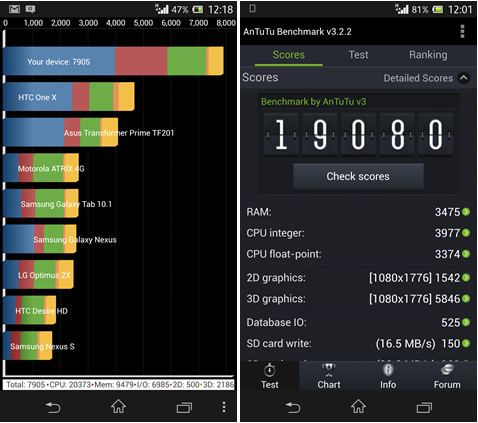 Having the same configuration under the hood as the Z, the benchmark result we got from the Xperia ZL is also near-identical to the former. It got a score of 7,905 (above 8K in one instance) from Quadrant, 19,080 on AnTutu and 59.7fps on NenaMark2.

We never really had a major issue on voice calls with this handset. Our voices came across quite clearly, and so does the voices of the people we’ve talked to regardless if it passed through the earpiece or the loudspeaker.

When the ZL first arrived at our HQ, we were expecting LTE connectivity from it. However, after trying out the feature from several different locations, we weren’t able to pick up LTE signal from any of those places. It’s only after researching further that we found out that the handset lent to us, C6502 is the non-LTE version.

From the get go, we already knew that the Xperia ZL’s 2,370mAh battery just isn’t gonna cut it. Yes it’s slightly bigger compared to the Xperia Z, but it still miles away from the likes of Galaxy Note II which is also 5-inch realm. But then again, capacity is just one part of the equation and power efficiency can play large in the total mileage. 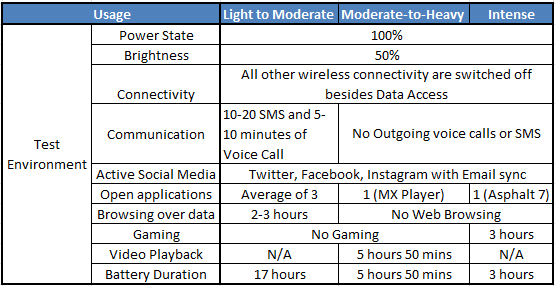 We subjected the Xperia ZL to a battery test that simulates the three common usage; light-to-moderate, moderate-to-heavy and intense (parameters are shown above). The result of our test (in respective order from left to right) is shown on the snapshot of battery usage in the image below: 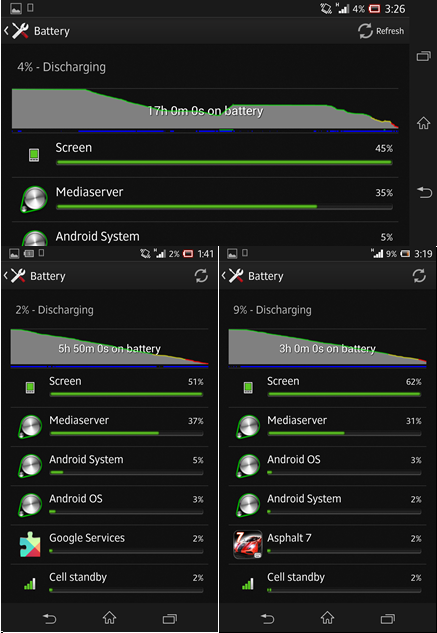 Even though the Xperia ZL’s 2370mAh battery is nowhere near what the other flagship handsets have to offer, the mileage we got out of it was pretty remarkable. But this is just the tip of the iceberg, because you can still stretch the battery life through a optimization called Stamina Mode. Here’s a screenshot of the estimated standby time of the handset without (left) and with (right) this setting. Conclusion
For what it’s worth, the Sony Xperia ZL is every bit a flagship handset as the Xperia Z. If anything, the only significant difference between the two is the lack of water/dust proof feature, as well as the classy design of the Z. In exchange for that, the ZL boasts a compact frame that enables a comfortable one-hand operation; a feat that’s unusual for 5-inch and up smartphones. As far the other aspects are concerned, it fared no different from the one we got from the Xperia Z. What caught us off guard, however, is how efficient the Xperia ZL is in consuming its limited battery resources. Add all of these characteristics, plus the Php4-5K price difference (Xperia ZL is being retailed for Php22,500, see listing at WidgetCity here) makes this a handset a very viable option for those who wouldn’t mind forgoing the elegant body of the Xperia Z.

What we liked about it:
* Solid design and build quality
* Great performance
* Impressive camera

What we did not like:
* Highly reflective TFT display

Hi there to all, how is the whole thing, I think every one is getting more from this site, and your views are pleasant in favor of new viewers.

Why everybody always compare this phone with Z…

It should be on par with Xperia ZR

sir, do you have any news if this zl or z will be available on any plans here in the phil? thank you :)

Also I have noticed that it takes to long for charging as well i.e. around 7-8 hrs for 100% charge.

I have never faced these problems on my Xperia Go.

Could you please suggest any resolution?

@Ronnie what you prefer using daily basis?.. Z or ZL?.. im confused what to choose.. guys what you all prefer buying and using?..

Hey @Tan, Sorry for the late reply. Anyway, I’m more inclined to use the Xperia ZL as a daily driver than the Xperia Z because it fits perfectly to my short and stout hands which allows me to operate it using only one hand. Also, I can be my usual clumsy self with the ZL without having to worry about the glass-back panel. Yes, I lose the water/dust resistant property of the Xperia Z, but that’s a small trade-off that I’m willing to live with the Xperia ZL. :D

The screen eats majority of the battery. 1080p screens are unnecessary IMO. Imagine if this only had a 720p screen, it’ll be pushing more than a day’s worth of power. I still prefer this than the Z.

The screen is horrible. Why can’t Sony NOT use TFT LCD already? It’s 2013! But look on the bright side, it’s the cheapest 1080p phone available!