Diamonds are the hardest materials known, and attaching that word to a phone means that it should at least be tough at something. Today, we put the Starmobile Diamond in the limelight. Read on to see if it can withstand the pressure in our full review. 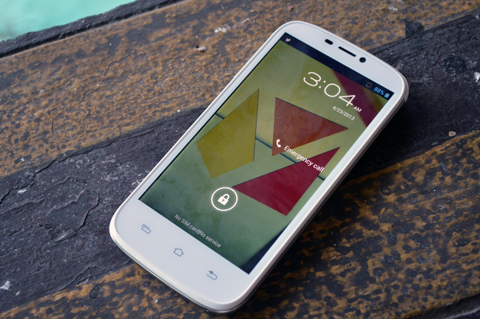 What’s so special about the SM Diamond? Well, it’s a phone following the 5-inch display trend with a resolution of 720p, a 12MP BSI camera with dual LED flash, a 3MP front-facing camera and Android 4.1 Jellybean. It also packs in a lot of extras such as a dual SIM card slot. You can check out our short video review of it down below:

People who were very familiar with the Galaxy series made the comparison quite often, but we have to say the design here feels better. The Diamond feels entirely ergonomic in the hand, and it really emanates a premium feel, regardless of the plastic construction. The chrome on the sides is very much polished, and they add a certain feel of luxury. 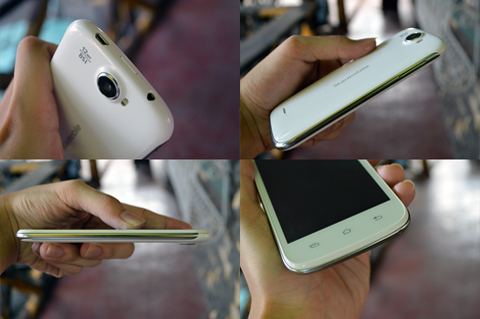 Up top you’ll find the micro USB port, the spot for the audio jack and the centered power button, which is quite hard to reach because of its size. To the left is the volume rocker, while the right and bottom sides are clear, safe for the microphone.

On the back you’ll find the speakers and the camera, together with some labels and the dual LED flash. On the front you’ll find the 5-inch display, a set of sensors, the front-facing camera, the earpiece and the three capacitive Android buttons.

The back side doesn’t really attract any dirt and debris, but the front side does, and it’s very clear when the screen is turned off. All-in-all, we were impressed with how this diamond was made.

Rocking the front side of the device is the 5-inch 720 x 1280 IPS display, which gave great amounts of saturation and viewing angles. The resolution and sharpness was also impressive for a phone of this class, but nothing in the UI seems to be taking advantage of it. Plus, the 5-inch display is surrounded by thick bezels, and it isn’t dominated by on-screen buttons. That means navigation is quite difficult. Add to that the fact that you still have to reach for the power button on top at times and the home button down below. If you’re going to use it with one hand, you’re going to have a bad time with accidental presses.

Jellybean runs the show here, and that means it includes Google Now, project butter and all sorts of extra goodies. It doesn’t have Android 4.2, or any heavy skinning on top of it, so we really shouldn’t complain as Project Butter really helps a lot here.

The interface is pretty much stock Android, but there are additions to be found here. It can use video wallpapers (although it slows down the device big time, and the same app can be found in the Play Store). You can also set up the notification bar to feature a battery percentage, which comes in very useful. Icons can also be changed with various styles, although the resolution of some UI elements still needs some work. There are tons of software included here, but none of which is useful as most of them are just links to websites (it just opens the browser) – Inquirer, Jobmarket & Starmobile. There is also ES File Explorer, ES Task Manager, Kingsoft Office and a couple more office apps… which aren’t really removable by default, and they’re not really the best out there so we’d still count them as bloatware.

Speakers work well for the most part, and the same can be said for video playback – although it occasionally stutters with 720p HD videos.

I don’t wanna lie here; the 12MP backside illuminated camera that Starmobile boasts is actually . Wait, cut that. It’s outstanding. It offers very sharp images, and settings like the saturation, hue & etc. can be toggled in the app, so no worries there. The killer here is how well it works in low-light, especially for a smartphone of this price. It easily trumps my Galaxy S2 and my Nexus 4 in quality. 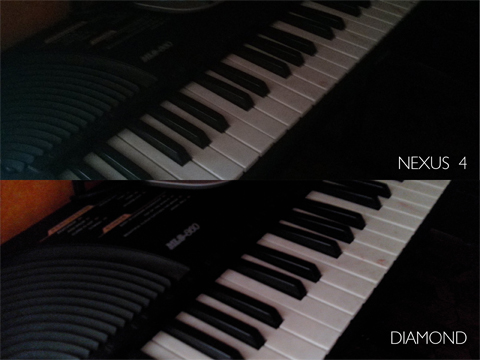 The camera app features HDR and a complete set of stock Android camera add-ons such as Time Lapse.  If you’re waiting for the deal-breaker, well, it’s how stuff is processed. The camera interface acts like a cameraphone in night mode from years ago. Focus and shutter lag is here when there is low lighting. When you’re out in the open, it does well just like any cameraphone from today.

Video capture reaps benefits from the camera’s capability as well – and continuous auto-focus works well. Only flaw that we saw here was how bad it handles solar flare once again.

Thanks to Project Butter and the 1GB RAM, things work fast – but it isn’t evident. The dual-core CPU does the tasks of course, but we think the slowdown is caused by how the display registers touch inputs as it was very unresponsive – but note that we don’t think it’s the UI or anything. It’s just that the reactions from the inputs were delayed. 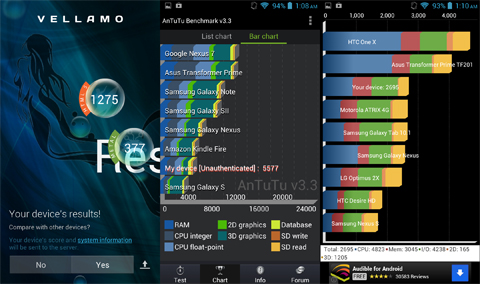 The Diamond managed to get 5,577 on Antutu, a high 2,695 on Quadrant, 17.5 on Nenamark2, 1,275 on Vellamo HTML5 and 377 on Metal. We’re just quite suspicious with the quadrant cores as the software came included with the phone and isn’t removable. Quadrant Benchmark scores are easy to cheat as YouTube videos even demonstrated how, so don’t really make this a basis for its speed. 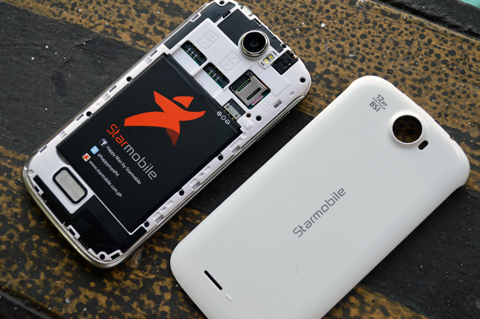 We looped video for 2 hours, under 50% brightness and 100% audio on headphones, and it managed to drain 60% of the battery. Standby times were below average, so we guess that leads us to the conclusion that you are going to need battery saving apps for this phone.

The Starmobile Diamond may not be perfect, but it made us glad for certain reasons. Sure, it needs to be more responsive, to be longer-lasting & to be a lot faster in graphics and processing, but that’s basically it – and those are pretty much the things that hold it back from being a true high-end contender with international brands. 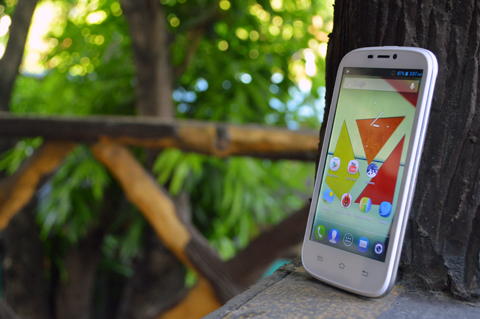 It has a very good design, a solid build, a good set of cameras (front & rear), and an almost stock version of Android 4.1, which most local phones don’t even have. Plus, for a price of Php9,990, we can’t really complain… although the CM Omega HD may have something to say about that.

ang drawback ng mga starmobile phones with 4gb memory is the configuration of the storage space. they separate etc the storage for pictures and other data from the apps. ok sana kasi safe ang data mo but masyado na nasacrifice and space for new apps. unlike cherry mobile na combine so bigger ang capacity. you can install sd card for your data instead of installing your new apps on the sd card kasi not all apps can be installed on sd. so CM is better.

Can you please take a picture using the front cam?

mas maganda pa ang Myphone A848i duo ko, Antutu B: 6271. I recommend to choose Myphone Android units not because im having one but i really assure the quality of the phone is Superb!! and the battery will lasts over a day.

This is a cornerstone of a Filipino brand phone. Can you just please think before you click? the words you chose speak what kind of person you are. Anyway, this is a good phone in fact I’m considering buying it next month however, the battery life is what holding me back. Do you have any other phone suggestion? price point maximum is 15k. thank you for your time.

The article is good though.

Bakit walang NenaMark bench? I’m interested to see if the frame rates can still be managed by the SGX531 even if the resolution is now at 720p. If not, I guess we now have to wait for the release of MyPhone’s A919i (rebranded Micromax A116 HD) for a faster GPU + 720p screen combo.

Thanks for the update! That’s quite low, I think you can attribute the lack of responsiveness on that, although I’m no authority on how phone GPUs work, just my two cents on the matter.

The MT6577 is quite a good platform but I don’t think the SGX531 GPU (released back in Oct 2006, almost 7 years ago!) is a suitable partner especially if they put higher resolution screens on the phones. They should probably draw the line on qHD screens when it comes to this GPU. That settles the question on my next phone, thanks!

One key selling point of this phone, especially at it’s price-point, is the Dragontrail glass. It should have been tackled in the review IMO.