If you’ve been searching for a smartphone with Snapdragon 835 that doesn’t break the bank, all you have to search for is Xiaomi. The Chinese tech company has been giving us the best specifications and performance for a certain price point like its latest flagship — the Mi 6. Launched just last month, the handset has 2017 flagship features you’d expect but not as expensive as the others. Here’s our review.

The Mi 6 is one of the pocketable — for today’s standards — flagship phones available in the market thanks to its 5.15-inch Full HD display. Only a few phones of this size, like the Huawei P10 and Galaxy S8 (due to its Infinity Display design), offer flagship-grade specifications.

Moving on, we have the usuals up front like the 8MP selfie shooter, earpiece, notification light, and a couple of sensors placed above the display. Below are the glass-protected fingerprint scanner and a pair of capacitive buttons. No mention of what kind of scratch-resistant glass is used for the display and the fingerprint scanner. 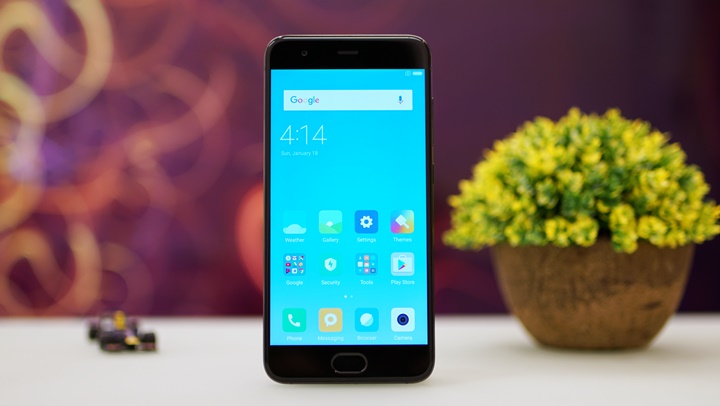 On to the sides, we have a sleek stainless steel frame that’s certainly cold to the touch and screams premium quality. The plastic antenna bands seamlessly blend to the frame as well. Holding the Mi 6 is pleasant and, again, it’s not as big as other expensive smartphones. 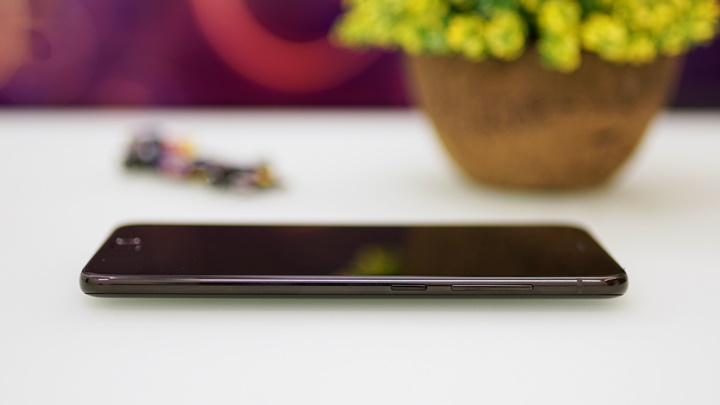 The right-hand side houses the physical buttons for power/lock and volume which are also made of stainless steel. It does not have any buttons on the left side but here lies the removable SIM card tray that accepts two nano SIMs with no space for a microSD card. 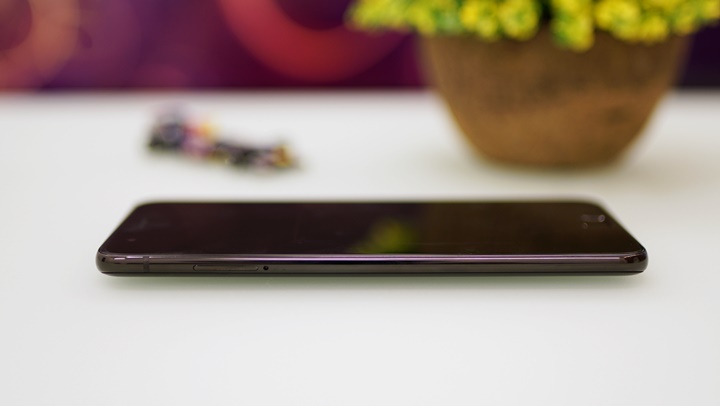 On top, we have a staple Xiaomi feature — an IR blaster. It’s a feature we rarely use but it’s good to have around. The secondary noise-cancelling microphone is also positioned on top of the handset. 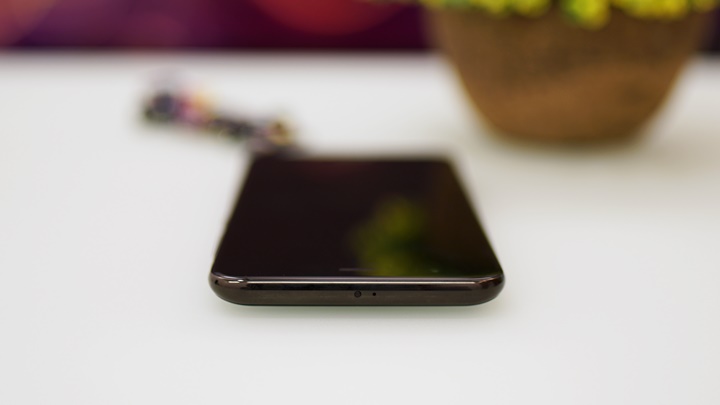 The bottom houses a pair of antenna bands with the USB Type-C port flanked by symmetrical holes. Hidden inside these holes are the main microphone and the loudspeaker. The Mi 6 has a stereo setup using the earpiece to act as a second channel of audio output.

As you have noticed, the 3.5mm audio port is missing on the Mi 6 as Xiaomi has dropped it in favor of headphones with USB Type-C connectors. No worries as Xiaomi provided a 3.5mm to Type-C adapter. 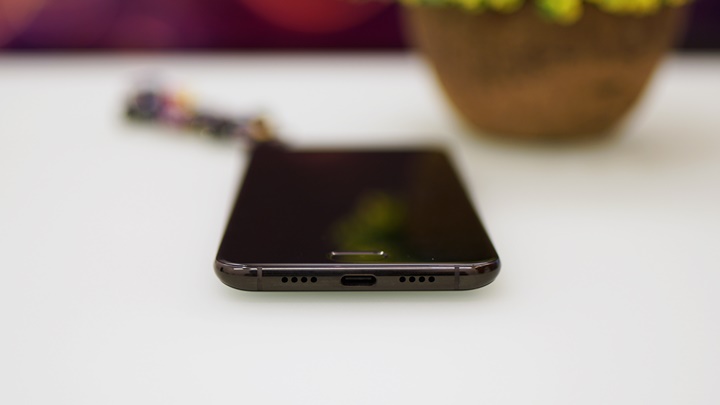 At the back are the two rear cameras of the Mi 6. Both have 12MP sensors but each of its lenses is unique. Xiaomi opted to give 2x optical zoom to the Mi 6. This gives it a similar setup with likes iPhone 7 Plus and ASUS Zenfone 3 Zoom. The back is smooth but definitely prone to smudges. 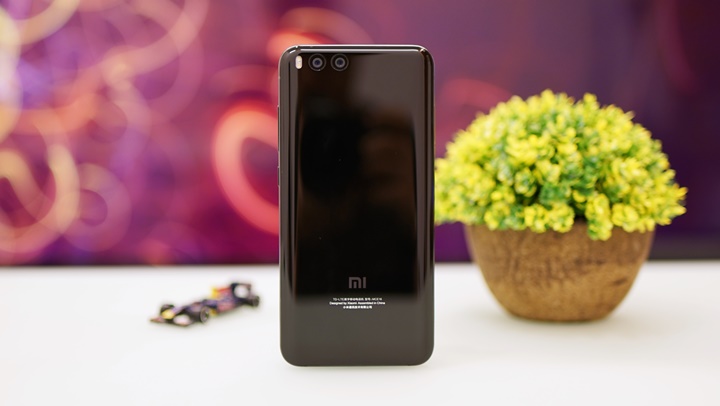 With a glass back and front, smooth metal frames, and overall sturdy build, the Mi 6 is beautifully crafted device. It’s comfortable to hold but a bit slippery. There’s an included soft case to keep it from deep scratches.

The Xiaomi Mi 6 has a 5.15-inch display equipped with a Full HD resolution. It’s an IPS LCD panel but with relatively deep blacks and vibrant colors. We did like how extremely low its brightness can be, ideal for nighttime use. Again, Xiaomi didn’t put in more pixels to its flagship phone, unlike other OEMs. At 428ppi, it’s more than enough to get a good picture but not exactly crisp for VR. 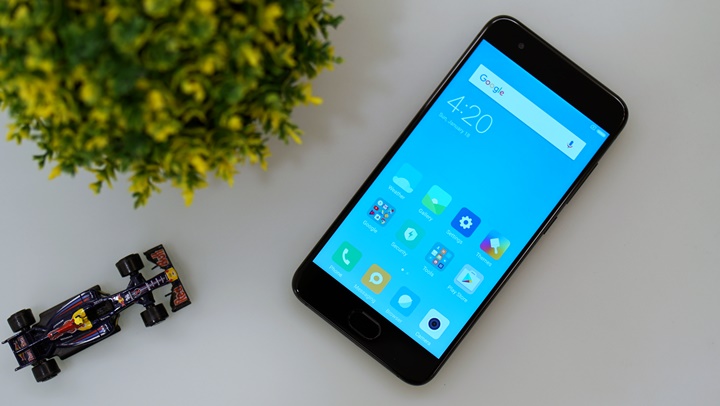 The handset does have a stereo setup, one at the bottom while the earpiece acts as a loudspeaker too. It’s similar setup as with the iPhone 7 to have two speaker channels without adding bulk to the bezels. It produces loud and clear audio even in an open environment. You can distinguish the left and right tracks if you listen closely.

If you’ve been following or owned a Xiaomi handset, you’d know that the phone runs MIUI, specifically version 8.2 which is based on the latest Android 7.1.1 Nougat. As of writing, there’s no official Global ROM available for the Mi 6 but the unit we have for review is running on a Globe ROM from the vendor with Google services and apps already available out of the box. 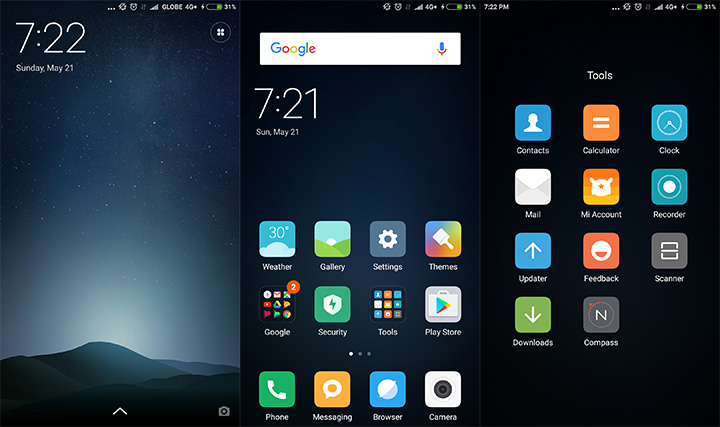 Since we first saw MIUI 8, not much has changed even with the Nougat-based version. To be honest, we were quite disappointed not to see anything new for its flagship handset. 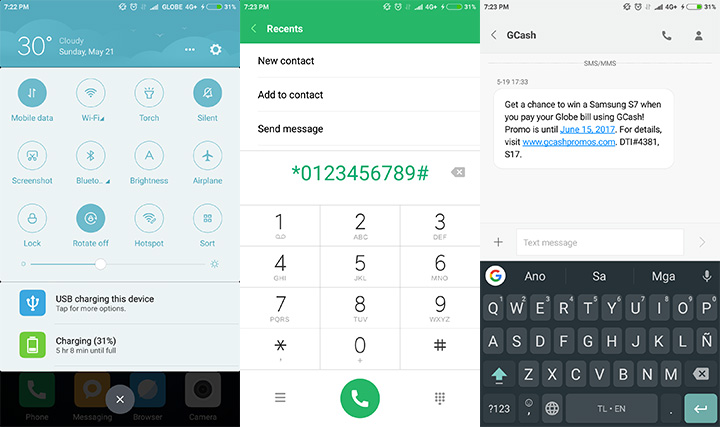 Nevertheless, MIUI 8 is a refined skin on top of Android. It’s lively, smooth, and has a number of customization available. It still doesn’t have an app drawer, just in case you’re wondering. 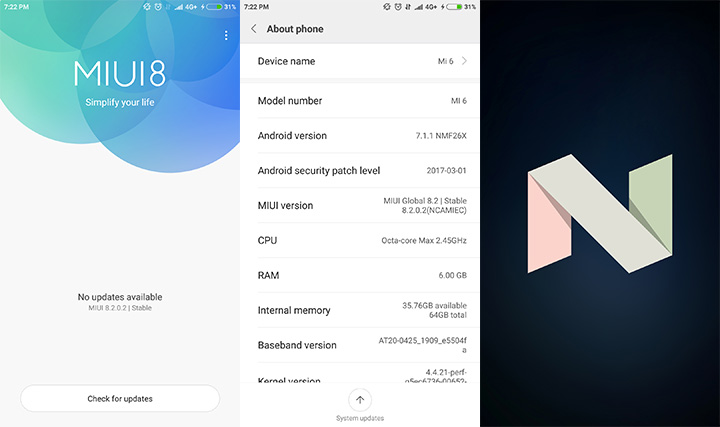 With the 64GB internal storage, about 55.43GB is available for use for apps, and personal files. Correspondingly, we’re unsure if the phone will receive future updates and patch since it’s not an official Global ROM, but once that becomes available, it’ll be fairly easy to flash if you know how to do so. We did run into random reboots during our first day of using the Mi 6 but we haven’t had one again since then.

Xiaomi continues to ride on the dual camera trend with the Mi 6 which is blessed with two 12MP rear shooters, one with a 27mm f/1.8 lens and optical image stabilization (OIS) while the other has a 52mm (telephoto) f/2.6 lens. It’s a similar setup with the iPhone 7 Plus and even features a portrait shooting mode. 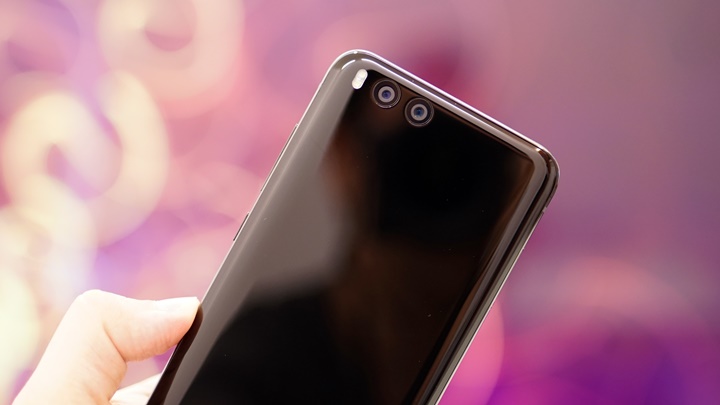 When taking regular photos using the primary sensor with the usual focal length, the Mi 6 is a competent camera. Thanks to the addition of OIS, it’s easy to just point and shoot. The stills come out looking lively and detailed. The 12MP resolution may not be as high as some shooters, but we’re more than satisfied with the photos we were able to take. Check them out:

The dual camera setup of the Mi 6 gives the user to advantages over having a single shooter. For one, the secondary camera offers 2x optical zoom. This allows a closer shot without the loss in detail. Keep in mind, though, that the telephoto lens doesn’t sport OIS, so it’s best to keep hands steady and the subject well lit.

Another feature is “Depth Effect” or more famously known as bokeh. Similar to other dual camera phones, the Mi 6 can automatically blur out the background to give the sense of depth, which is like the effect you get when using a prime lens on a DSLR. While the output looks a bit artificial, it delivers well for portrait shots.

There are three cameras on board the Mi 6 and the last one would be the front facing camera. Built to take selfies, the front shooter captures sharp and bright selfies. There’s a built-in beautification feature as well, but you’d have to download 3rd party apps if you want more options other than a refreshed face.

As for the video, the Mi 6 can record up to 4K resolution, and since it’s got OIS, all video resolution can use the stabilization feature. There’s a good amount of details, especially when shooting in 4K. No issues with framerates as well. Audio capture could have been better, though.

Thanks to the dual camera setup of the Mi 6, there’s a number of shooting modes available. The choice of having 2x optical zoom and depth effect for portraits are nifty features to have in your pocket.

A flagship phone must have a top chipset and that’s what the Mi 6 has. Inside is a Qualcomm Snapdragon 835 with an octa-core Kryo CPU running at a maximum clock speed of 2.45GHz, and the latest Adreno 540 GPU. Multitasking is handled by a generous 6GB RAM. 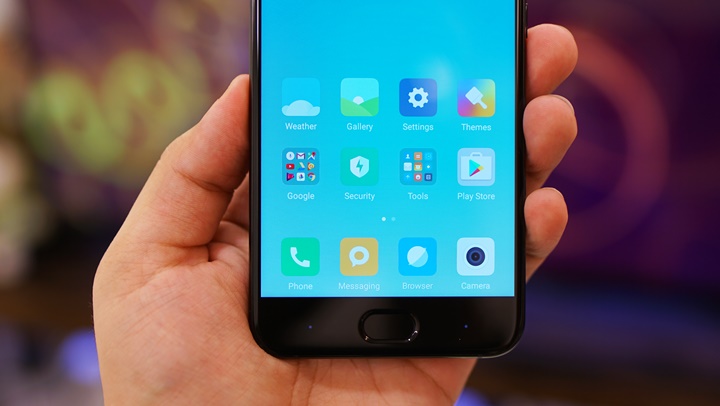 The result of this setup is a fluid and capable smartphone. It can virtually run any apps and games available in the Play Store with ease, given that developers optimized the app well. Also, it can handle a number of running apps in the background thanks to its large memory. So far, we haven’t encountered any hiccups in both general and app performance. 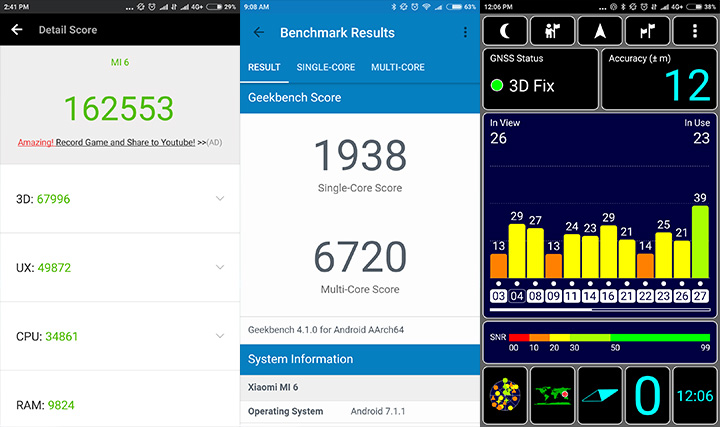 Gaming-wise, the Adreno 540 is a proficient graphics unit. We were able to run and play graphic intensive titles like NBA 2K17 in high settings and The Walking Dead (Season 3) smoothly. Although, as the graphical prowess of the handset is splendid, it does heat up during usage. After playing for 15 minutes, the phone registers at around 48 degree Celsius.

The fingerprint scanner works flawlessly too but it sometimes struggles with greasy fingers. Make sure to wipe your fingers before using the phone. 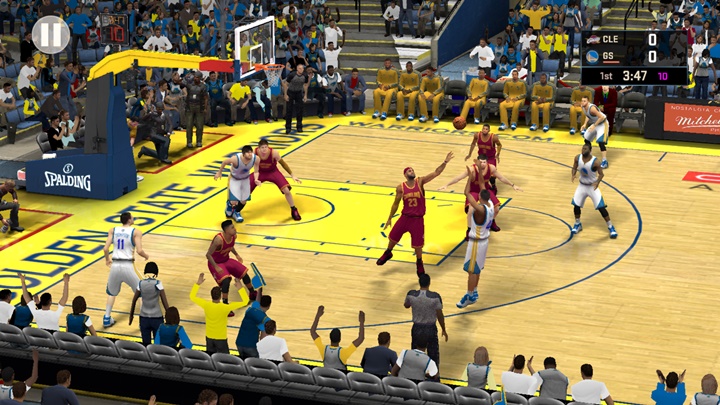 The Mi 6 also flies on benchmark tests, may it be CPU or GPU performance. Here the results:

Author’s note: PCMark and 3DMark tests are unavailable due to unknown app issues.

Call quality on the Mi 6 is great. With its loud earpiece and noise-cancelling microphones, it’s able to deliver a proper call experience. No drop calls and metallic voices unlike with run-of-the-mill handsets. 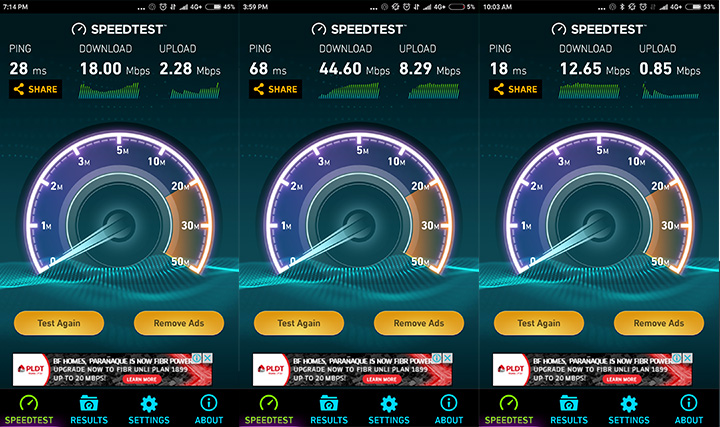 During the course of the review, we used a postpaid Globe LTE SIM. The phone supports local telco’s carrier aggregation but it lacks the prized and widely available Band 28 or the 700MHz frequency. Nevertheless, other available bands on Globe, as well as Smart, are supported, just keep an eye for the “4G+” icon on the status bar.

Other connectivity features include the latest Bluetooth version 5.0, as well as dual-band Wi-Fi, fast-locking GPS, and even NFC.

Giving juice to the Mi 6 is a non-removable 3350mAh Li-Po battery. It’s a considerably sizeable cell for a phone this size and Xiaomi has let go the headphone jack to give way to a bigger battery. For comparison, the Mi 6 has a bigger battery than its predecessor despite having reduced dimensions. 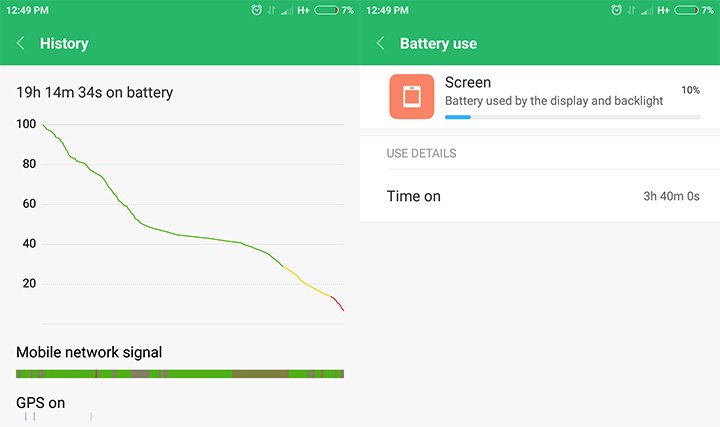 Unfortunately, the PCMark benchmark app keeps crashing after a couple of minutes of the battery test. As for real world use, the Mi 6 was able to for a day — about 20 hours after almost 4 hours of screen on time. That’s with mix daily use and constant mobile data.

Did Xiaomi produce a worthy flagship smartphone? We’d say yes. It’s definitely a 2017 phone with its nicely crafted body, top of the line features, dual cameras, and the lack of headphone jack. It would have been nice to have a bundled wireless Xiaomi earphone to fully justify the removal of the 3.5mm port but that will just fix a hefty price tag. 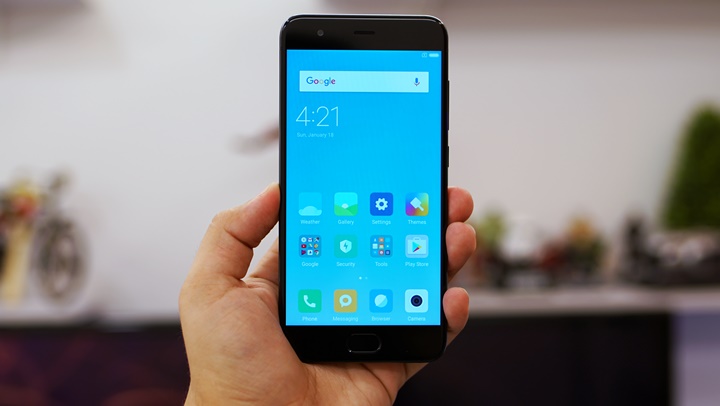 I thought this was a good to be true phone but when I saw the cons, “no headphone jack” why just why lol