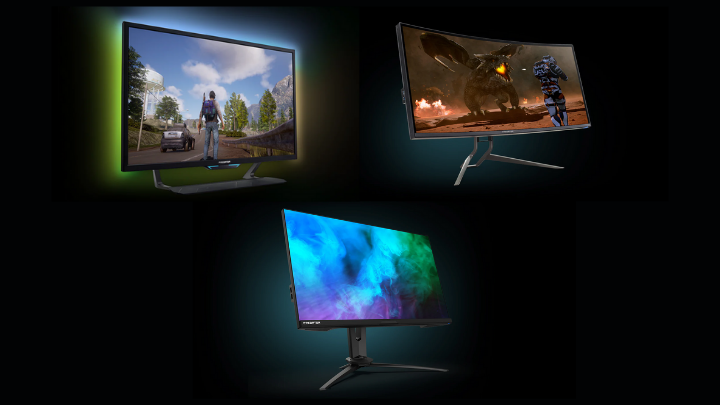 It contains a pair of HDMI 2.1 ports that support the latest game consoles and allows for 4K 144 Hz with VRR using only a single cable. However, a USB hub offers a USB-B port, a pair of both USB 2.0 and USB 3.0 ports to support an array of peripherals, a USB Type-C (PD30W) port, and a built-in KVM switch.

Also, the monitor comes with NVIDIA G-SYNC compatibility and RGB lighting strips. Besides, it also features various technology that allows the monitor to adjust to each user’s environment: Acer ColorSense adjusts the screen’s temperature to match the ambience of the environment, Acer LightSense detects the ambient lighting and adjusts the monitor’s brightness settings accordingly, whereas the Acer ProxiSense automatically wakes the monitor when users are nearby or dims it when they aren’t.

It has a 175Hz refresh rate (overclocked) and response time as low as 0.3 ms. Predator Game Mode offers players eight pre-set (customizable) display modes, while Acer LightSense and Acer ColorSense make automatic adjustments to screen brightness and color temperature based on the environment. The NVIDIA G-SYNC Esports Mode, however, is a display preset designed to ensure the lowest possible latency by turning off the variable backlight and makes it easier to distinguish objects in dark areas.

Furthermore, the Predator X38 S also includes the NVIDIA Reflex Latency Analyzer, a system latency measurement tool that detects clicks coming from the mouse and then measures the time it takes for the resulting pixels (i.e., a gun muzzle flash) to change on-screen, while NVIDIA G-SYNC ULTIMATE is eliminating screen tearing, minimizing display stutter and cutting down on input lag.

Lastly, the Predator X28 is a 28-inch UHD (3840 x 2160) monitor with a slim profile and narrow bezels. It features a VESA DisplayHDR400 Certified Agile-Splendor IPS display that offers a 155 Hz refresh rate (overclocked) with a 1 ms G-to-G response time with NVIDIA G-SYNC and G-SYNC Esports Mode. 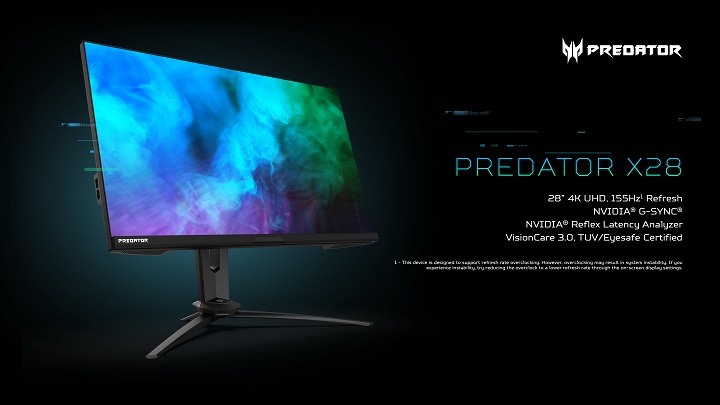 The monitor also features the NVIDIA Reflex Latency Analyzer. Similar to the Predator CG437K S, it supports Acer LightSense, ColorSense, and ProxiSense to ensure that the monitor can adapt to any lighting.

Other features include BlueLightShield Pro and TUV Rheinland Eyesafe certification.

There’s no word yet about their pricing and availability.