Before the end of January, IDC released the result of their research on the tablet market. As the firm have predicted, tablet shipment continued to soar as more and more people and companies adapt to the post-PC revolution. Not so surprisingly, Apple remains the dominating force in the industry, continuing to pull away from its competitors.

Apple had a very solid outing last year, owning 43.6% of the global tablet market with shipments reaching almost 23 million. Although iPad shipment have increased by little over 48-percent from the prior year, their total market share is down by 8.1%. A chunk of this market loss is claimed by their arch-rival, Samsung.

From a 2.2 million outing on 2011, Sammy’s tablet shipment has sky-rocketed to 7.9 million a year after. This stellar performance boosted the South Korean company to the far second place, taking 15.1% of the global market share. But as outstanding as it may sound, they are not the company that had the biggest traction last year. That title goes to ASUS which is in the 4th place.

The Taiwanese company couldn’t be happier with the way 2012 has turned out for them, garnering a year-over-year growth of more than 400%. They still have a long way to go to reach the top, but they are well underway if they can keep this level of performance. 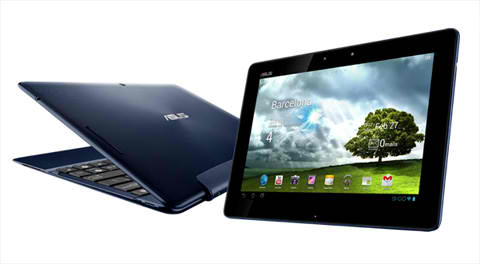 Amazon, which is in the third place in the ranking, also saw some improvements on their total shipments. However, their market share is a bit on the downside, dropping 4.4% compared to their 2011 performance. Well at least the online retail has something to celebrate, unlike the company behind Nook Tablet who we think would like a do-over of 2012.

Barnes and Noble is slowly losing its grip (if it had one) on the tablet market with performance on the down trend. The company slips one place to the fifth spot, behind the biggest gainer of the year, ASUS.

2012 was a big year for tablet manufacturers. Demands for tablets soared, resulting to a substantial 75% increase in shipment from the previous year. Like most people, we also think that things will just get better moving forward as we embrace the new phase in computing. We can also expect Microsoft to play a significant role in the overall growth of the tablet industry, especially now that more and more slates are running on their touch-optimized OS.

Even if I like android better than iOS, the iPad with retina display is still the best tablet in the market.

Market share for Androids may be higher, but it’s due to the fact that they’re trying to get some market share by selling them at nearly manufacturing cost, just like the Nexus line.
In short, wala sila masyado kinita para sa market share na yun.

If the apps for Android tablets do not improve, then we’ll continue to see Apple owning the tablet market.

As for the smartphone, Samsung in particular enjoys the big sales of SIII and Note 2 because Apple has no direct competitor for those 2 gadgets. That will be seen when Apple releases the 5″ smmartphone.

The Galaxy were bestsellers before, but when the iPad Mini was released, their sales went poof…

If apple make phablet to directly compete with Sammy’s S3 and Note 2 will see prices going down. Or they can just put phone capabilities on the Mini and lessen it size to 5.5-6 inch, at put retina display. they’ll be back on top in smartphones category.

I’m a bit surprised by that Asus figure. I would think they had a better market share. These guys suggest this new Memo Pad is going to do wonders: http://www.asuseeepad.net/fonepad-me371mg.php

But just look at the YOY GROWTH. Asus and Samsung’s are phenomenal! It’s only a matter of time.. :)

A huge chunk (probably the majority) of that is Nexus 7.

Tablet is still apple turps. Base on the tabulation, there is an increase in volumes compared to 2011. The tablet market is widening but apple needs to catch up in terms of their overall share. They need to tap those lower end market if the want to survive.

from IOS user in tab and Android in phone.

Some iSheep will soon learn their lesson. haha

You can’t deny the fact that iOS is still the smoothest for a tablet, but not for the phone. But the trend now is the price point, who can shell the best specs at low price is the winner. Consumers are getting smarter and more practical. I give it 1 more year before someone can topple Apple from the tablet market.

they deserve it because they refined and re invented the tablet

then the others followed, you cannot deny that, it’s a fact