During a conversation with Shinzo Abe, the current Prime Minister of Japan, President Benigno “Noynoy” Aquino III mentioned that our country will soon be migrating to ISDB-T (Integrated Service Digital Broadcasting – Terrestrial) signal from the current analog setup.

According to President Aquino, the determining factor that finally swayed him to give the go signal was the reliability of ISDB-T even during calamities such as the Fukushima incident in Japan. 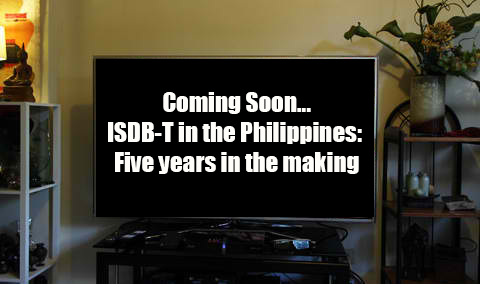 Before the decision was made, NTC has already zeroed in on two possible candidates; the ISDB-T and Digital Video Broadcasting – Terrestrial 2 (DVB-T2) from Europe. Based on their research, the Japanese standard proves to be the better option as far as the migratory cost is concerned. Moreover, unlike the DVB-T2, the ISDB-T is equipped with early warning mechanism which will come in handy during typhoons and earthquakes.

Although the decision puts the long-delayed transition to digital broadcast one step closer to reality, NTC commissioner Gamaliel Cordoba claims that it will take five more years for the transition to be finished.

Maganda talaga ang digital TV. I was able to watch over the air digital TV in Canada. The system might be different than DVB-T but the picture quality is like direct from a blu-ray. No shadows plus there are additional data carried showing the schedule for the whole day with details about each show.

Can’t wait. We already had our cable cut and are using homemade digital TV-compatible antennas (total cost, 300php from Ace Hardware materials)…only to find out that the current frequencies local broadcasters use are too low to be clear with the homemade antennae. Here’s hoping the migration to digital UHF frequencies for the major networks will be seamless.

Hi, I am interested on how you did it. I hope you can help me, I bought an ISDB-T receiver in China but it doesn’t seem to work, I don’t know if its incompatible or is it just me. Thanks.

i remember those early warning popups when watching anime from japan, it shows a superimposed map of the effect on the lower left and additional text information regarding the incident (magnitude, location and other advisories). Hope migrating our existing tv sets would be easy.