Realme has announced that the Realme UI update based on Android 10 is officially rolling out the Realme 3 Pro units in India. 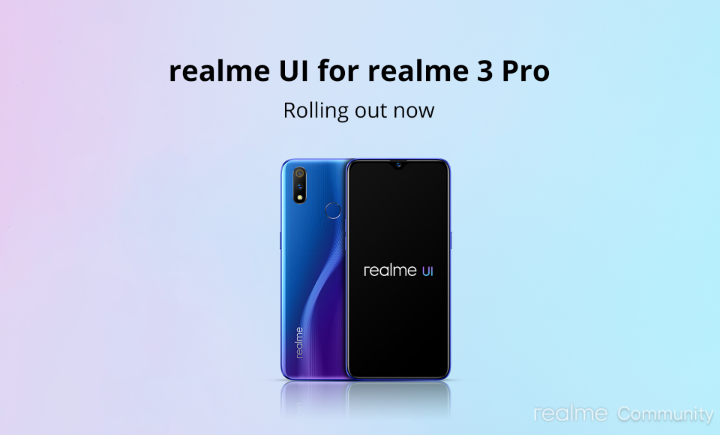 The Realme UI firmware based on Android 10 has the version number RMX1851EX_11_C.01 with the following changelog:

• Optimized user interface and improved one-handed operation.
• Optimized Smart Sidebar: Replaced File Console with File Manager; removed OSIE Visual Effect and No Notification Alerts.
• Drag an app out of Smart Sidebar to open it in Split-screen Mode.
• Added two new features: “Assistive Ball Opacity” and “Hide Assistive Ball on Fullscreen App”.
• Optimized the Floating Window feature for more apps.
• Added Bubbles: A bubble is displayed when you open an app in a floating window from the Smart Sidebar. Tap the bubble to collapse or open the app.

• In Quick Settings or Smart Sidebar, you can open Calculator in a floating window.
• Added the trim feature in Recordings.
• Added the Weather (dynamic) ringtone, which automatically adapts to the current weather.
• Added weather-adaptive animations in Weather.
• Added audio source selection for screen recording

• Optimized the Album UI for a clearer structure and photo thumbnails.
• Added Album Recommendations that recognize more than 80 different scenes.

Realme says that it will have a staged rollout and will be pushed randomly to a limited number of users to ensure stability. A broader rollout will be impleented in the upcoming days if no bugs critical bugs were detected.

No word yet when Realme 3 Pro units in the Philippines will receive the update.