The update lets users turn on their camera or share their screen during voice chats in groups on all devices, including tablets and desktops. With this, voice chats in any group can now turn in group video calls by tapping the camera icon to switch the video on.

Plus, in addition to your camera feed, you can also share your screen – or both at the same time. 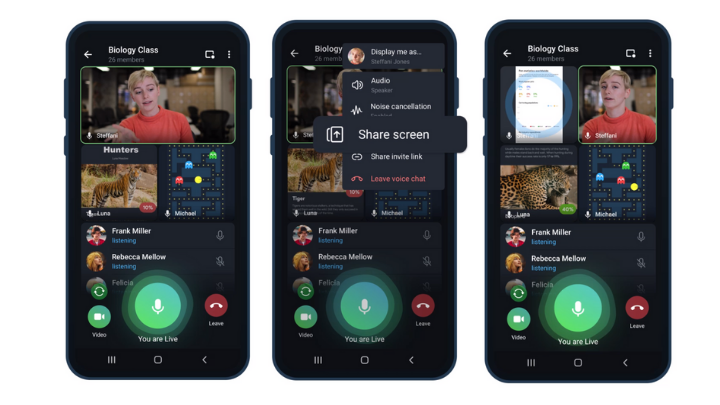 While audio-only participants have no limit, the video is currently available for the first 30 people who join the voice chat. However, according to Telegram, the limit will increase soon. Tablets and computers have more space and offer more display options. Users may see a split-screen view of the video grid, as well as the list of participants, optimized for both portrait and landscape orientation.

Meanwhile, voice chats on the desktop open in a separate window. Desktop apps also have selective screen sharing so users can broadcast an individual program instead of your whole screen.

On the other hand, Telegram also rolls out animated backgrounds for chats. It features multi-color gradient wallpapers which are generated algorithmically. Also, users may create their own animated backgrounds, by choosing three or four colors to unlock the animation, then add an optional pattern for extra style.