Telegram has announced new updates for its app which includes group video calls with support for up to 1,000 viewers, higher quality video messages, screen sharing with sound, and more. 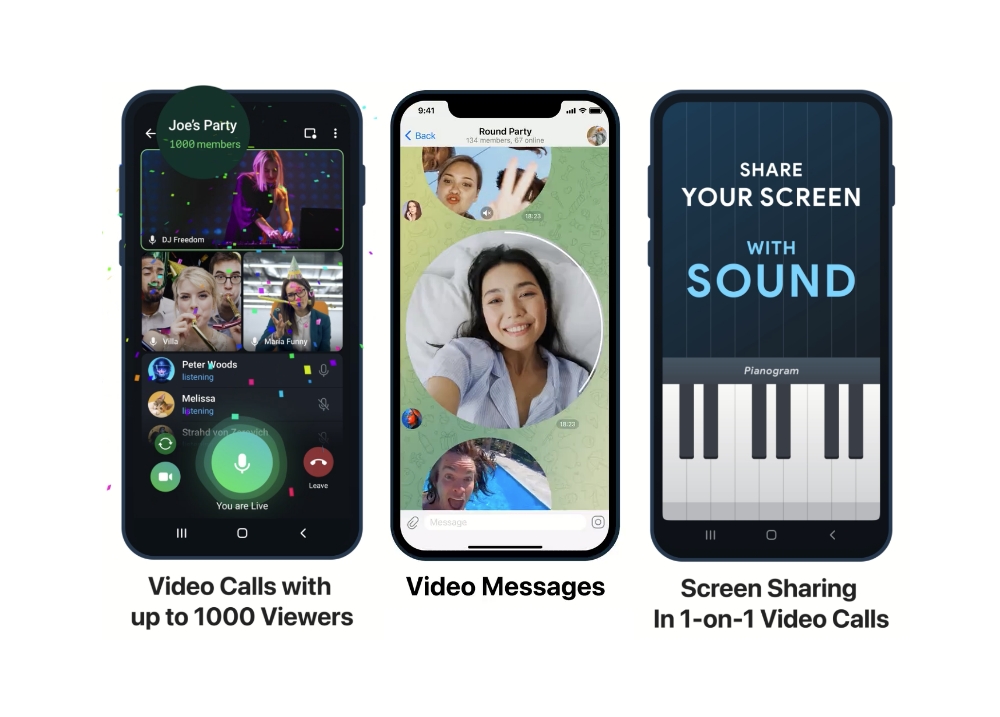 Group Video Calls 2.0 allows up to 30 users to broadcast video from both their camera and screen, now 1,000 people can watch that broadcast, which is great for online lectures and presentations. Telegram said that it will keep increasing the limit.

To start a Group Video Call, create a Voice Chat from the info page (in the ? menu on Android) of any group where you are an admin – then turn your video on.

Video Messages 2.0 now has a higher resolution and you can tap on a video message to expand it for wider viewing. Tapping on an expanded video message pauses it and gives you the opportunity to fast forward or rewind the message in case you missed a word.

Audio from your device will keep playing as you record, allowing you to sing along to your favorite songs or reply without pausing your podcast. Additionally, recording with your rear camera lets you pinch to zoom in and capture things at a distance or add a dramatic effect.

For Screen Sharing with Sound, it has been added to 1-on-1 calls as well, and now includes the sound from your device when broadcasting in any video call. When switching on video during any call, you can swipe to choose a camera or share your screen instead — and use the video preview to make sure that everything is to your liking before going live.

The Telegram Desktop app now has its own photo editor to crop, rotate or flip images – and add drawings or stickers. Unique to desktop, your edited versions can be sent as uncompressed files by unchecking the Compress Images box.

Other new features also include timestamp links, allowing you to press and hold on a timestamp in a message to copy the link; auto-delete of messages after 1 month; passcode animations; password recovery and reminders; text messages have new lightweight animations on Android; in-app camera now utilizers all zoom levels on your device; multiple recipients for forwarded messages; profile pictures now follow the messages as you scroll; and new animated emojis.

To get the new features, make sure to update the Telegram app in the Apple App Store or Google Play Store.