The Fonepad 7 which was just launched a few days back is an update to the sub-Php6K Fonepad 7 that we reviewed in early 2014. Let’s take a look at what ASUS‘ new 7-inch tablet has in store for us in this quick review.

Price is updated for 8GB variant. 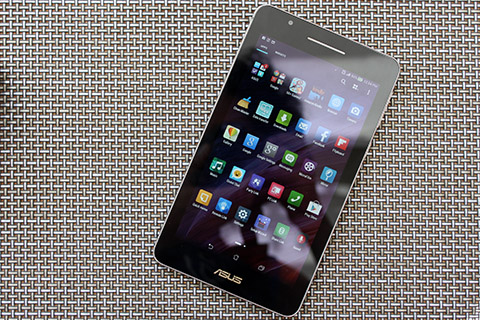 The Fonepad 7 is the company’s budget offering in the 7-inch segment. The goal here is to give potential buyers an option to get decent specs without asking for much in return. Its previous model, the FE170CG (HINT: The older is 170, new model is 171) performed well during our sweet time with it. Needless to say we’ve got big expectations for the refreshed FE171CG. 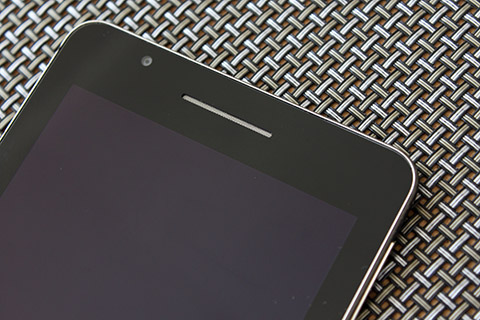 The upper area is where the 2MP front camera sits comfortably just beside the speaker grille. There’s a thick bezel up top and on the bottom which isn’t all that bad, as it gives room to hold the device in landscape view. 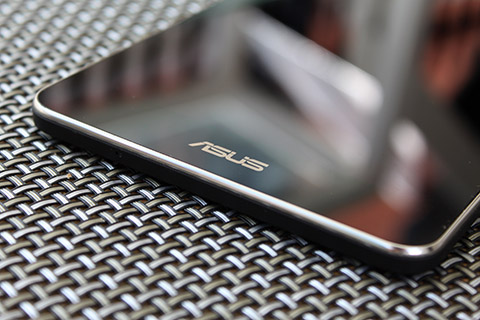 The company’s proud branding is all that can be seen near the base of the device, while its entire surrounding is emblazoned with a strip of metal chrome which adds character to the tablet. This is a big improvement from the FE170CG that rather has a round-edged back cover with no details except for its textured panel. 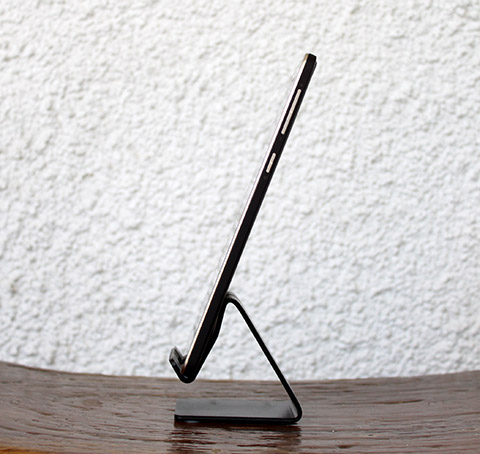 At just 7.9mm, the new Fonepad 7 is thinner than its predecessor which stretches to 10.7mm thick. It definitely looks sleeker and feels better to hold. 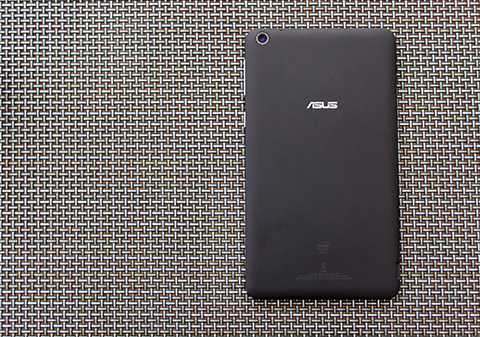 The back cover is a whole panel made of high-quality plastic. It has a very minimal look — no segments, is monochromatic in color, and was opted to have a matte finish that’s smooth to the hands. 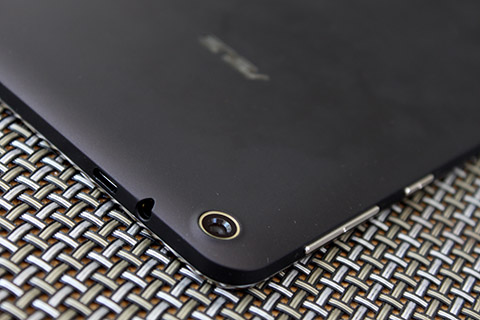 Squeezed altogether at the left side of the back panel are the microUSB port, 3,5mm audio jack, 5-megapixel rear camera, volume rocker, and power/lock button. Just like its previous model, it still has no flash of any kind to accompany its rear camera. But as we’ve pointed out in our previous review, 7-inch tablets aren’t as commonly-used for photos as smartphones. 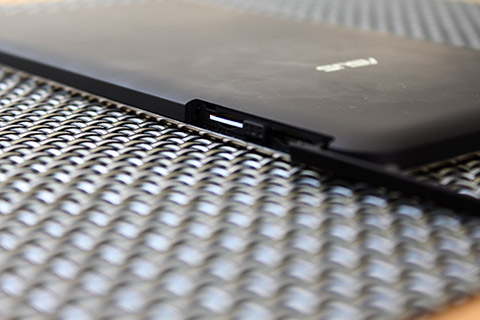 The top left side hides a flap that opens to reveal dual-SIM card slots. The Fonepad 7 only accepts micro SIMs so you best get your SIM cards trimmed. We inserted a 3G-capable SIM card and we’ll let you know how it handled data connection on our full review. 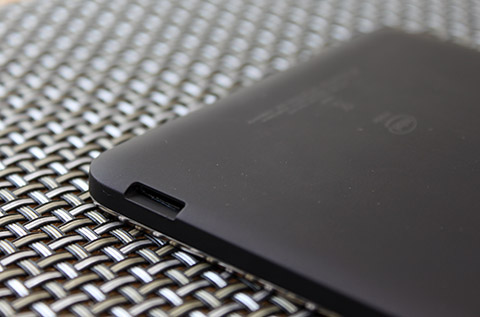 Expansion for memory is at the bottom right of the back cover. It’s a push in/push out kind of system going on here — which may drive other users (like me) paranoid of the microSD card falling off by accident. So far, it’s secured tight and locked in place. 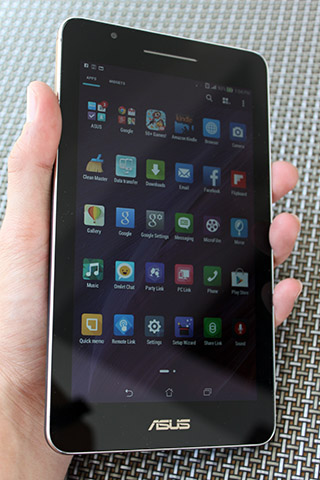 Overall, the Fonepad 7’s physique definitely gets our approval — it is impressively thin, packs a good heft for the hands, and is way more stylish than the company’s previous model. We will have a more detailed look at the FE170CG and FE171CG’s physique in a side-by-side comparison to show you the changes ASUS made with these siblings during our full review so keep an eye out for that. 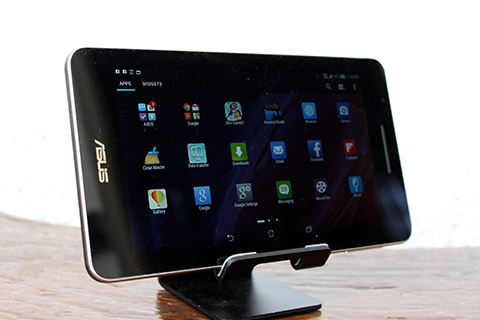 Inside its shell, the same Intel Atom Z2520 dual-core processor present in its predecessor breathes life into this tablet. Do keep in mind that the company’s Hyper-Threading Technology is embedded at the heart of the CPU so it should be more efficient in processing data than other processors. Here are some of the benchmark scores in comparison to the earlier variant:

Spending some time fiddling on its Android 4.4 KitKat with ZenUI was fairly smooth. So far we only noticed slight hiccups during the time we were switching from app to app, but it was easily tolerable.  It comes pre-loaded with the company’s storage and entertainment apps like WebStorage that offers 5GB worth of space online and PC Link that allows you to mirror your content to a bigger screen.

After everything we’ve seen so far, we’re still impressed with the refreshed version of the Fonepad 7. ASUS stepped up its game big time in terms of design, that’s for sure. As for the performance, navigation looks promising but we’ll be spending a few more days with it to effectively assess the tablet as a whole (display, camera, battery life, 3G connectivity, the whole shebang). Stay tuned!

i bought this at KingPad in greenhills for P6995. 16GB variant is only 1GB RAM. It is not a very responsive device. When you touch the screen, sometimes nothing happens. you have to touch again to open an app. If it were not for the phone feature of this tablet, i would have bought an 8inch LG instead. but hey, thats what you get for its low price, right?

i guess, lazada’s specs is incorrect on this model– 2GB Ram and 8MP cam? their specs could cost at around 8 to 9k.

What is the stand used in this review ?
and where can we buy it also how much ?

This is not available yet sa kahit saang resellers sa megamall and sm north edsa as of today. Ang estimate by the asus shop and memoexpress is next week pa daw. Ang ibang shops no idea pa kung kelan talaga.

is it already release in the market? i ordered FE170CG last week, pero sabi ng supplier phased out na dw. so i was wondering, if out na ba ito sa market?

so is it 8gb or 16gb?
The link below shows 16gb ..
http://www.yugatech.com/personal-computing/asus-launches-fonepad-7-fe171cg-in-ph/

The company’s official list of specs states 16GB, but our demo unit came in with only 8GB of storage. We’ve updated the article reflecting 8GB and 16GB variants. Thanks.

someone
Reply to  someone

Thank you for spotting. Corrected.