Neo’s line-up of Core i3 and Core i5 laptops include this 14.1-inch Neo Basic 4103N. The model name alone is a good indication that the laptop offers the basic features and skips fancy features that would add up to the cost.

The laptop looks plain but with a glossy top accented with faint horizontal lines and dark swirls. The rest of the laptop’s surface has a matte finish so it’s not much of a smudge-magnet. 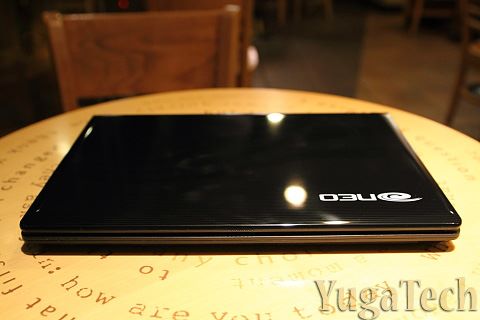 The unit is a bit on the heavy side which isn’t a big surprise considering it’s a full-fledged laptop with a built-in DVD+RW drive. You get a complete set of ports on both sides of the unit — 3 USB 2.0 ports, a VGA and HDMI port, a card reader, LAN and dial-up modem port, ExpressCard and the obligatory audio ports. 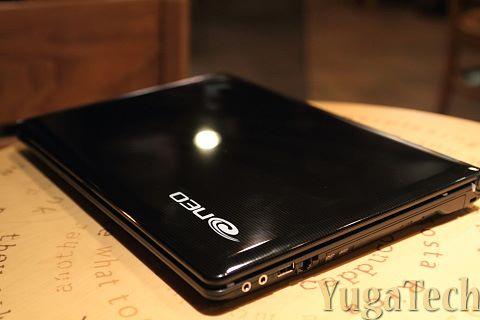 It’s the a full-sized keyboard with large chiclet-type keys and a wide trackpad to go with it. While the keys are easy and comfortable to use, there seems to be some sort of pressure sensitivity (or lack thereof) that made me miss some keys when typing. I guess you need to tap on the individual keys a bit harder than usual to get it right.

The left and right clickers on the trackpad aren’t separated but because it was made a bit wider, there’s no problem with hitting the right section of the button. 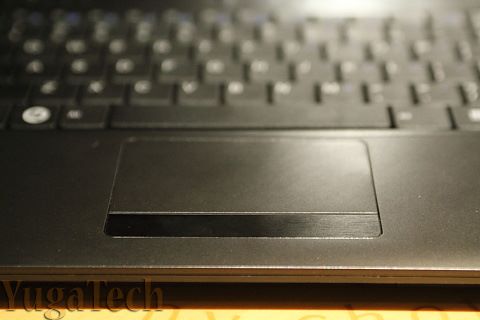 The display is nice and bright but not too crispy. The maximum supported screen resolution is 1366×768 pixels and is pretty standard but, as I mentioned in previous laptop reviews, I’d wish manufacturers offer higher resolution for display sizes above 14 inches. I spotted a lone dead pixel at the bottom right corner of the screen but since this is just a review unit, I’m thinking this is an isolated case. 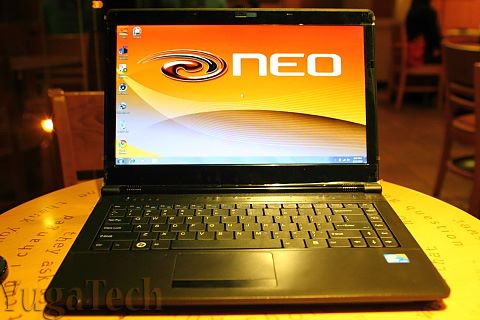 Laptop performance is great with an Intel Core i3 330M running at 2.16GHz. The 2GB memory is also using a faster DDR3 module. Based on the Windows Experience Index, the system got a base score of 4.0 which is taken from the video graphics. The CPU got a good sub-score of 6.0.

As for connectivity, I didn’t find any problems using the WiFi 802.11 b/g/n and Bluetooth on the unit. Same goes with the optical disk drive (DVD+RW) and the 320GB Toshiba HDD.

The 6-cell battery is only rated at just 4400mAh and lasts about 2 to 3 hours of regular use. BatteryBar shows a maximum of 3 hours on a single full charge. There’s not much attempt to extend battery life performance on these category of laptops as they aren’t really meant to be very mobile or portable (most other units we tested in this category has the same battery rating).

The Neo Basic line of laptops were introduced to basically shake up the lower end of the price spectrum for Core i3 laptops. As such, they’re offering this unit as one of the cheapest out there with a suggested retail price of Php29,999 (no OS pre-installed). It’s a price positioning that could attract a lot of people looking into a budget Core i3 laptop (and they did the same with the Core i5 powered Neo Basic B4105).

Neo is a sub brand and locally assembled brand of the Taiwanese company Clevo which makes other brands like Alienware, Sager, VooDoo PC, Falcon, etc.

Laptops are supposed to be really portable and one measure of portability is battery life. Iâ€™ve had two models of these and they have given me incessant heartaches with their inadequate battery life. Although I find them particularly tough (dropped them lots of times) they still work fine. If youâ€™re planning to use them around the house with the power cable constantly plugged in like a desktop PC, well and good.Otherwise, steer clear of this brand. Itâ€™ll die on you when youâ€™ll be making the most important presentation of your life. I’d rather really buy Filipino. But Neo takes advantage of this sentiment and abuses it to no end. Let’s stop buying Neo until they develop a better battery.

i rather buy a notepad than an ipad. it doesn’t need battery and can make paper planes out of it.

I got my hands on a Neo from my cousin that got submerged in Ondoy flood last year. The processor (Core 2 Solo) appears to be built-into the motherboard. Also I doubt that the GPU is upgradeable.

I agree with IC DeaDPiPoL. My old HP laptop’s screen was damaged probably because of pressure daw. HP asked me to pay P29,000 for the repair while that laptop costed me only P40,000. I tried to look for other repair shops, I found cooltoyz and said it will cost me P20,000. I ended up selling the defective unit and buying a vaio from the US.

Anyway too much for bashing HP (lol jk), I saw B4105 the other day sa Cyberzone. It really looked “cheapstake” for me. If not for the glossy cover, I won’t call it a laptop. I have no experience (and the clerk I asked) on Neo’s service and warranty but the store clerk said that the parts are customizable (ie. processor, GPU, etc.), is it true?

Neo is probably gambling they can compete with other name brands. Also aren’t i3’s essentially the same as C2D series? The inclusion of the integrated GPU in the CPU should have drastically lowered the cost of production of this device. For P29,999 laptop an Ion chipset/radeon mobility gpu should have been added to the design.

Why should I buy Neo if the price difference is minimal or even cheaper? Unless you give it for free!

@manong
are you referring to the cheaper alternative brands like emachines for acer, compaq for hp?

neo brand is not cheap. some well-known brands even have cheaper offerings.

anyway, the build and design sure look cheap. another letdown from a filipino-owned company.

so when did neo and fancy features end up in the same sentence? NONE! ZERO!

Are you sure those are chiclet keyboards? Looks like a scissor-switch keyboard to me.

As expected from Neo. Cheap laptops. I just find the logo quite odd to disgusting. Looks cheap too, like you could scratch it off with your fingernail.

This a good unit for budget conscious buyer but want more power to the laptop. But for those who require extensive graphx at hd space ths is not for them.

i have a question about laptop. are they interchangable? i mean, can you put an acer battery into a neo laptop?

Pretty cheap for a core i3.

hmm interesting, from the Core i3 to Core i5, you will get almost an hour drop in battery life.
http://laptopmanila.com/216/reviews/neo-b4105-review/

Probably the cheapest Core i3 laptop out there. Neo Basic 4103N Review: http://www.yugatech.com/blog/personal-co…

@abeolandres hi may i just ask if what laptop ang ok bilin if ang budget is 20 to 25k? thanks :)