Globe & Smart to offer the Samsung Galaxy S3 this May

Based on the number of tweets from Globe Telecom and Smart Comm., it looks like both telcos will be offering the new Samsung Galaxy S3 this May.

The date has not yet been set but according to Samsung reps, it will be either May 22 or May 24. I am betting on May 24 though if this is going to be a huge launch between the two carriers.

Globe’s tweet was subtle but already contains the #globegalaxys3 hashtag:

Smart’s recent tweet was a bit bold and contains photos of the Galaxy S3 itself (#smartgalaxys3): 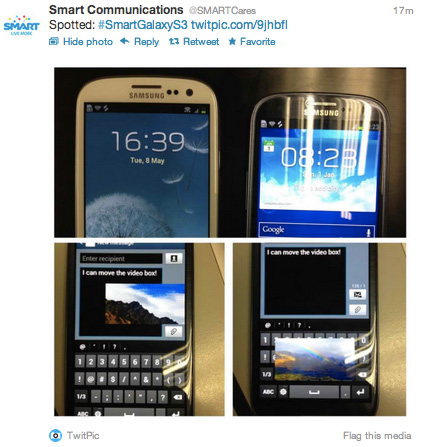 The last time we saw this kind of tweet-fight was during the launch of the iPhone 4S back in December. My guess is that the Galaxy S3 will get the same treatment, considering the popularity and sales of the Galaxy S2 and Galaxy Note in both networks.

We’ll just have to wait and see. That’s just two weeks to go.

Note: We covered the launching of the Samsung Galaxy S3 in London last May 3. Check out our first impressions here.

I go for SMART on this one!