It seems Globe is the only one actively defending the telco’s Fair Usage Policy. In a recent release they sent out via Twitter, they explained the FUP in a nice little infographic.

Here’s the entire picture of what the whole throttling and daily bandwidth allowance works. 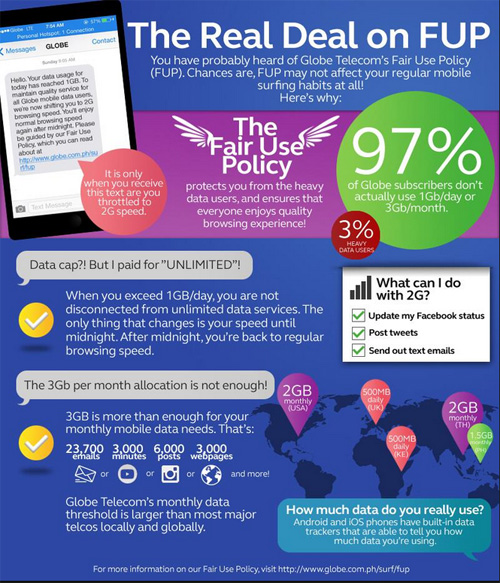 They’ve also pointed out that less than 3% of their subscribers do exceed the 1GB per day or the 3GB per month allocation.

The controversy broke out last week when Globe started actively enforcing their Fair Usage Policy, sending out text messages to heavy users informing them of the measures implemented once they reach the daily and monthly allocation.

It seems Globe is trying to wean the 3% of their subscribers out of their network. The strategy is to endure all the pain with restricting all those 3% of their subscriber base (and the huge possibility of losing them to a competing network), rather than wait for the others to enforce the same on a later date. It’s either now or later and Globe decided to take the heat first and get it over with.

Last week, we noted that both Globe and Smart have their ow versions of the FUP. Globe has 3GB stated on print while Smart has 1.5GB cap stated in their FUP. You can read more about it here.

I’m still wondering why put “unlimited” if there is cap?

3GB / mo is not bad.
T-Mobile offers a similar setup at 2.5GB / mo (though without the daily cap).
I’m with an AT&T family plan with 6GB shared (for 4 smartphones) and fortunately we’re not reaching our 6GB cap.
End of the day, it’s all about one’s mobile internet usage. The fair usage policy is just there to prevent abuse of LTE just to download torrents.

beg to disagree! All-in plan Smart subscriber ako. i use lte of my phone, use it as hotspot, to download bluray-ripped torrents, like 5gb to 10gb/movie. my bandwidth is 10gb – 15gb a day, seriously. been doing this for 6mos already.

What they don’t get is you could easily get to the limit even with casual activity. Software updates, app updates, online radio, watching Youtube videos. Even purchasing and downloading content (music and video) from wherever. You subscribed to unlimited internet exactly for these purposes. So kung hindi mo naman magamit this way, huwag na lang.

What good is super fast speed if you can’t maximize it? If they intend na gamitin ko lang siya for email and other casual purposes, it doesn’t matter if I have LTE or a slower connection (but still generally good speed) as a 10 KB email would be sent without noticeable time difference (technically, may difference, but in actual usage, they’d all be sent “instantly”).

mali representation ng data nila. pag naka prepaid ako syempre zero ang consumption ko sa data since may bayad. naturally more than 90% ang hindi nakaka 1GB per day. they should have limited their sample size to those who are actually subscribing to unli internet plans. pero syempre gawain talaga nila ang magbigay ng misleading information so long as it is to their favor.

I realized that as well. Marketing bullshit.

I don’t really care about the 1GB per day cap. We have our home internet connection via wifi for heavy downloads. Even if it’s just 2mbps. & if i really have to use my phone’s internet. movies are only 700-900mb in YTS (used to be YIFY). I only use this for school & when I’m in the province & have to watch my youtube vids. etc. the real bummer is the 3GB per month allocation. Caps should only be applied daily. Not monthly. The 1GB cap per day is enough. 3GB per month is outrageous! I could use all of that in just a week! & yes there’s no LTE here in Antipolo. Speeds here are atleast 3-5mbps.

Shut the fuck up, Globe. Shut the fuck up.
There’s no such thing as valid explanation when you just care about damn money while crippling and screwing your consumers.

Watch this and share. This greatly explains all the crap globe and other ISPs are saying about congestion. Its all about MONEY!
https://www.youtube.com/watch?feature=player_embedded&v=uyuIiG4c4Go

Smart also has a data cap.. its 1.5GB/month and also 1.5GB per day.. it already have been posted by Yugatech.. Globe has 3GB/month and 1GB/day.. so what will you choose?