A story by Philip Elmer-Dewitt from Fortune points to Apple’s iOS as the king in mobile web usage, crushing Android by a mile. All of iOS devices (iPhone, iPad, etc) have a combined usage of more than 50% of all mobile devices. This, despite the growth of Android phones and tablets in the last year and the fact that Android is now the leading smartphone OS in the world.

The difference between iOS and Android is to large I could not hardly believe it. So, I pulled out the traffic data from YugaTech in the last 5 months (since January) and checked the traffic coming from mobile devices and tablets. 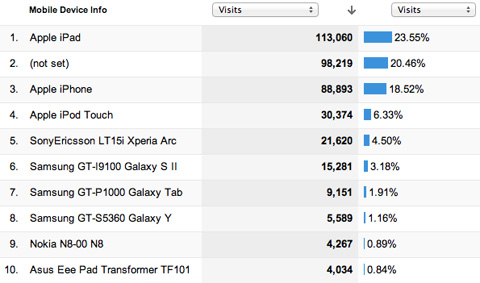 Indeed, the iPad, iPhone and the iPod Touch were in the top 3. Their combined traffic is over 48%. Android devices in the top 10 accounted for only around 12%.

Interestingly, the Sony-Ericsson Xperia Arc is the most popular Android handset followed by the Galaxy S2.

what if I use to browse the net using a third party browser, say opera mobile, would that still count as an anonymous entry (number 2) or it would still show my actual phone (motorola defy)

It would show your phone.

Noob question, does this include the mobile apps like fb mobile version etc or is it just for browsers or is it any time you connect to the net?

unless you have hard figures to back up your claims, this is closest to being accurate.

Those iphone or ipad users have postpaid plans!!!

when you insert a prepaid sim to a device, iphone or android, the network autosend to you the internet settings appropriate to the device you are using..so i guess that means postpaids and prepaids are equally monitored

Most people use their phones just check to Facebook, text, email, and obviously call. Those activities wouldn’t really show up in mobile web stats.

i do most of my stuff on mobile phones (iphone&experia arc), pdf,word,excel.photos,videos and i browse the internet using portal and chrome with desktop user agent..isn’t that a lot of data? or you’re just commenting relative to your own?

Yuga, you failed to consider that Android browsers have a “user-agent” option. It can show itself as a desktop browser(ie,ff,chrome versions), or even as an ios browser(safari). Some Android phones also have adblockers(via host file).

Android is not limited like in IOS that you always have to press the show desktop version.

That is why I did not stop at just the iOS signals only and dug deeper into the Analytics. You will notice the 2nd chart now shows the handset model and not the OS.

Some android devices have an option to chang the user agent of their devices so it could view the web the way a desktop or ipad views it.. That may have affected the number in the charts unless it determines the specific device used and not the browsing format

Yes, I agree on this one

“This, despite the growth of Android phones and tablets in the last year and the fact that Android is now the leading smartphone OS in the world.”

Isn’t all it implies is that more people use iOS devices for browsing the web?

I am interested with the #2 (not set) status. I am inclined to assume that this is Androids but of different device types. :o)

Plus, its higher on rank that the iPhone. Hmm

I think those in the #2 are Java ME devices. The first chart above indicated them.