The National Bureau of Investigation (NBI) has announced that starting tomorrow, April 1, it will be fully implementing its online application process for the NBI Clearance and will no longer entertain walk-ins.

Starting April 1, 2015, “the NBI will be fully implementing the Online Registration, Electronic Payment, and Appointment System as part of its campaign of offering fast and convenient service.” 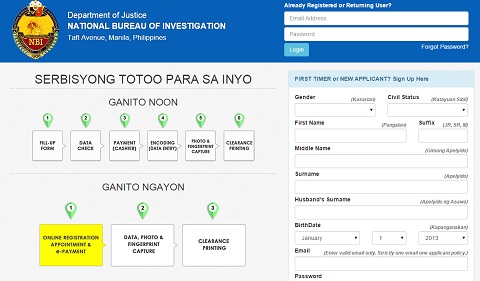 NBI Application Forms will no longer be available to walk-in applicants and are now encouraged to go online and visit the NBI website at www.nbi.gov.ph or clearance.nbi.gov.ph. Applicants can then fill out the forms on the website, select the NBI Branch where they want the Clearance to be processed and set the date of appointment. As for payments, applicants have four options: Bank (over the counter), Bank (online), Mobile, and Bayad Center.

In a bid to shorten queues and time spent by the public in clearance processing sites, the National Bureau of Investigation (NBI) will be fully implementing an online application scheme for documents starting today.

Starting April 1, NBI spokesman Nick Suarez said the bureau will no longer be giving out NBI application forms to walk-in applicants as the bureau will be strictly implementing its full online registration, electronic payment, and appointment system nationwide.

“We are rolling out this new procedure to help our brothers and sisters get their clearances fast and at most convenient way. Almost all of us are using internet, we better make use of them in transacting business with NBI,” Suarez said.

“With the implementation of the new NBI system, we shall continue to roll out and implement solutions to progressively eliminate queues and simplify processes,” he added.

After the online registration, the NBI spokesman said applicants may proceed to any of the 55 NBI sites nationwide for the payment and biometric enrollment preceding the release of the document.

“They can only go to the NBI clearance sites on the scheduled date they have chosen after they have filled up their forms online.

During the soft-launch of the system last January 2, Justice Sec. Leila de Lima expressed optimism that the long queues in different NBI clearance cites will be shortened following the bureau’s adoption of e-clearance.

The new system features an automated cashiering module designed for consistent accounting reports that eliminate malversation and corruption. It also has a renewal module to make shorten waiting time of those who already have old records.

I got my nbi clearance last feb 23 for my forst ever local employment and i did it through online. After mo pumili ng branch, pupunta bka dun for biometrics (finger print and picture). I got my clearance in less than an hour, sa robinsons manila. Pero kapag may kapangalan ka, babalikan mo after 1 week i guess bago mo makuha clearance mo.

Two things worry me about this news. 1. NBI is a government agency, and 2. the mention of April 1. :)

Pumila ako next day. At 3am.

This is good news, especially for the fresh graduates. I find their instructions very unprofessional though. Even a college student knowledgeable in HTML5 and CSS3 can easily fix those weird UI bugs on the screenshots…

must be April fool’s joke