It’s not yet Thursday, but Filipinos went on twitter yesterday to remember what what was their to-go social networking site years ago: Friendster.

While Facebook is undoubtedly now the number one social networking site in the world with billions of users, there’s no doubt that Filipinos were hooked to one social media site before everyone jumped ship to the one at Menlo Park.

Surge of Popularity in the Philippines

Friendster began its popularity with the masses in 2004 when it has been decreasing its activity in North America. Carmen Leilani De Jesus, a marketing consultant based in San Francisco, was the first to link to what was the site’s surge of web traffic coming from many parts of Southeast Asia.

One year after, it managed to grab over five million active users, and figures from the Internet World Stats pegged the amount of Filipino Friendster users at 7.2 Million. “It was the first mover in social networking in the country, and before that, nothing came close to it except for forums or message boards,” our very own Abe Olandres mentioned to American broadcasting network PBS back in 2007. Friendster also went on to be a centerpiece of local politics and see one of the first online social political campaigns, led by then-Senatorial candidate Chiz Escudero in the 2007 National Elections. Friendster proved to be very popular that the company decided to set up an office in the country to manage its growing userbase, paving way for local events such as the Pinoy Friendster Day. 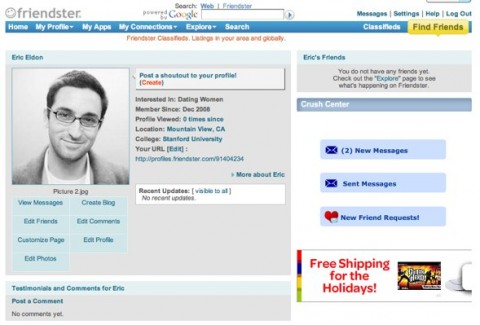 Since then, millions of Pinoys who want to socialize went on to post updates, customize their profiles with GIF wallpapers, and send out ‘testimonials’ to their friends with alternating letter cases, punctuation, and numbers replacing a few letters. We all learned to make our own little codes to format our testimonials in whatever color, font face, or style we want them to, and make our own custom profile layouts with sparkles, goth designs, or bizarre arrays of color combinations. One can never deny that this site has brought out the inner jejemon in us.

We got a few twitter users who were using the ‘Friendster Memories 101‘ keyword, trending in the country yesterday, sharing their own experiences with the site:

Friendster Memories 101: Moving background themes, GIF images on the about me corner, and crazy profile pictures.

Friendster may have reached and enjoyed its peak popularity over the years since it reached the country, but 2009 was the year it had feared: Facebook, a social networking site rival, and twitter, a micro-blogging site, began to increase its user base in the country. To Filipinos, Facebook was the social media site Friendster never was — There were games such as Farmville, and a minimalistic, cleaner interface.

Since then, Friendster saw a deep decline in activity and began rolling out a redesign of their website along with a slew of new features, such as online boards and games, in an attempt to compete with their emerging rivals. Apparently it was not enough to persuade the users to come back, and huge losses were reported. By the end of the year, it was bought by MOL Global, one of Asia’s biggest internet companies, for $100 million. 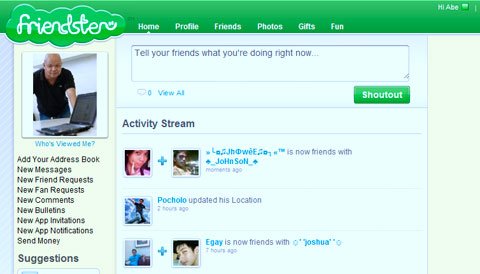 In early 2011, Friendster announced that it would close its social media site for a revamp, ending its nine-year operation as a social networking site since its inception in 2002, and a seven-year reign as the country’s top social media site. Users were then asked to export what were most important to them — their statuses, uploaded photos, profile pictures of friends,  and testimonials (or comments).

Friendster went live again in June 2011, just months after shutting down — not to compete for once the social network site it once went head-to-head with, but rather complement it. Users who visited the new website were treated not only with their old account sign-in details refreshed back to basics, but also having the option to log in using your existing Facebook account, a sign that the once well-loved website has bowed down to acknowledge Facebook as the new king.

The Friendster today not only houses web-based games, but also recently made available a new section for purchasing PC games called Playbox.

Whether it may be long distance relationships, simple bondings, or stories of marriage, heartbreak, and crime and captivity, there’s no doubt that Friendster has been an integral part of our lives back then, as it is one of our to-go online destinations.

What were your favorite Friendster memories? Share them down below.

The problem with Friendster was that it was too “Self Centered”. You can customized everything but it was hard to follow all other people around you. Facebook focuses more on your friends. Talk about the irony on their names.

Indian bloggers are the same. Visit fonearena if you want proof.

i forgot to retrieve my pics there….memories that are lost forever.

We appreciate your feedback. Thanks!

@carl Lamiel: …And I appreciate your positive response, choosing to see my comments in a constructive light. I hope I didn’t sound too harsh back there. More power to you, sir!

No problem! We strive to put out better content everyday, and comments like these sure keep us on track. :)

Facebook should be renamed Lifebook, coz most if not all users made it their online diary posting their ridiculously perfect life 24/7…

same here….I miss those testimonials my “TRUE” friends sends in, sharing memories you two had before. I feel much special unlike FB, all you do is connect with people and that’s it.

How do you write losses on the balance sheet?

“the once well-loved website has bowed down its knees”

dec2003 when my acct went live. I missed the testimonials and the who viewed your profile.