Along with the SoundTouch 20, we also received the Bose SoundLink III a couple of weeks back for review. And after using it as our daily driver, we’re ready to share with you guys our full review of this portable wireless speaker.

Design-wise, the Bose Soundlink III is as basic as it comes. Truth be told, there’s nothing about this speaker that will immediately catch your attention, other than maybe the small “Bose” logo on the front. 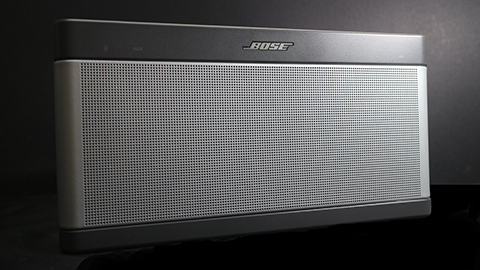 We assume that the young and hip crowd will not give this speaker a second-look, and would rather go for the flashy, light-emitting JBL Pulse which we’ve reviewed just recently. However, the more laid-back consumers will certainly appreciate its no-frill design which is complemented by the SoundLink III’s grey paintjob with a touch of white paint at the top.

The same minimalist approach is applied to the speakers control panel which is situated at the top portion of the device. The left portion of the panel comprises of the Power, Bluetooth and Aux buttons, while the other half is reserved for the keys that controls the sound output of the device (Mute, Power Up/Down). 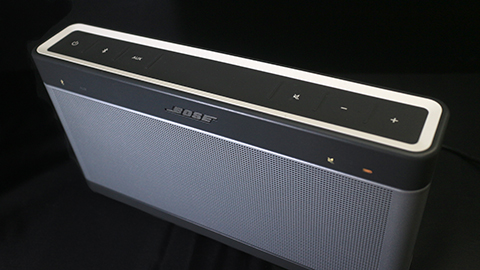 The SoundLink III’s front section is mainly occupied by the speaker grilles which hide the quartet of drivers from plain sight. The only other components worth noting here in this area are the four LED lights on the front of the speaker which corresponds to the speakers Bluetooth and Aux functions, as well as the Mute and Battery/Charging state.

Apart from the Micro-USB port and two other ports for charging and Aux-In, the back portion of the speaker looks pretty much like the front end; uncluttered but rather uninteresting.

Other features (or the lack of it)

If you’re planning to shell out almost twenty grand for a wireless speaker, you’re most likely to expect a little some extra on the side than what the competition is offering. Well, we hate to disappoint, but that’s not the case with the SoundLink III. 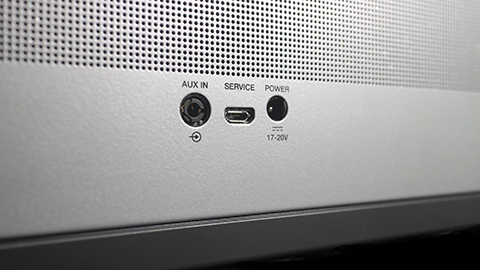 Although it pretty much have most of the basic things covered (the inclusion of a Play/Pause, Previous and Next buttons would’ve been nicer), this wireless speaker doesn’t have NFC or Bluetooth aptX support which are slowly becoming a staple for mid-tier to high-end wireless speakers.

That said, the SoundLink III, in our opinion, is just a straightforward Bluetooth speakers that functions the same way as a normal wireless speaker would, but costs two times more than what the competitions are offering. But then again, it’s made by Bose so what can you expect.

A good portion of what you’ll be paying for the SoundLink III goes into the four neodymium tranducers inside of it which, by the way, are also partly the reason why the speaker weighs so heavy despite of its deceivingly lightweight form factor.

Needless to say, these drivers are fine tuned to deliver above-average sound quality that you’d expect from a speaker of this caliber. And although we have to admit that its sound performance alone wouldn’t suffice to cover the whole price of the admission, it certainly helped in making its SRP a little easier to swallow.

Let’s talk about its sound signature. Right from the get go, we noticed that there’s plenty of bass to go around with. Perhaps a little bit too much as it tend to somewhat overpower the treble, resulting into a rather veiled output, particularly in the highs and upper mids.

Not only were the highs are slightly attenuated, the chimes (and other similar-sounding instruments) lacked vibrance to point that it sounded flat. The vocals, on the other hand, don’t seem to be affected that much by the SoundLink III’s powerful bass. It sounded very clear and blended well with the speaker’s deep bass.

Apart from its respectable sound output, battery life is another strong suit of the SoundLink III. Bose claims that it can last up to 14 hours of continuous music playback (wirelessly) on a single full charge and based on our test, the speaker, or should we say the battery, works as advertised and sometimes even surpassing the claimed mileage depending on the usage. 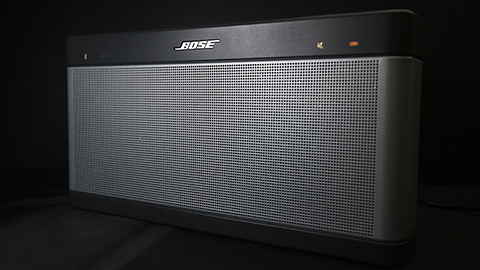 Of course, we didn’t have the luxury of playing tracks for 14 or more hours straight. So what we did was we ran a timer whenever we’re using the speaker, and stopped it whenever we’re out in the field. On average, we got around 16-18 hours’ worth of juice before we reached out for its proprietary charger.

It was back in 2011 when Bose introduced the first SoundLink Bluetooth Mobile Speaker. The competition in the wireless speaker arena was not as fierce as compared to today, and all the company needed to do to win the crowd was apply their signature sound and slap it on to a portable speaker that can be synced wirelessly to the audio source.

Three years and two iterations later, the company still decided to use the same principle on the SoundLink III. And while it’s true that the battery life is significantly better than the two previous models combined, not to mention the current version has a more refined sound quality than its predecessors, we think that Bose could’ve done more with the SoundLink III given the technology available today.

With everything taken in to consideration, we still feel that the Bose SoundLink III is a decent wireless speaker that offers superb sound quality for its size and long battery life to last you for hours on end. Yes, it doesn’t have the fancy add-on features that other wireless speakers in the market have, but if you’re just in the market for a Bluetooth speaker from a reputable brand and money is not an issue, then the SoundLink III should definitely be on your list.

The Bose SoundLink III is available locally for Php19,000.

Any alternatives that are a bit more balanced in terms of sound?

I have this and so far, it’s great! Long batt life. Great sound and bass it produces for its size. Downer was that it has no remote.