HTC One M8 vs XS1 sniper rifle from 1 km away

Last month, you’ve seen the Galaxy S5 receive a .50-caliber round from a Barrett M107A1. As expected, it didn’t end well for the Samsung flagship. Now the same folks who brought you that video, RatedRR, is back and they’re now shooting the HTC One M8 using a high-tech sniper rifle from an impressive 1 km distance. 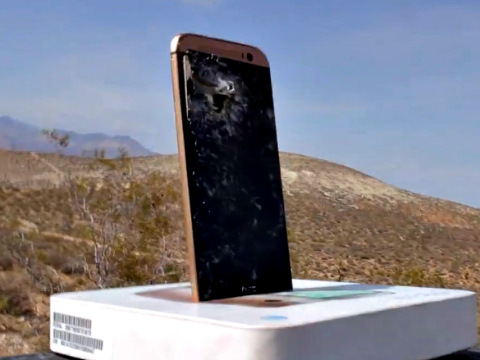 I’m sure most of you are already acquainted with HTC’s latest flagship so we’re not going to dwell on that. And considering what it is up against, specs do not matter.

What’s worth looking at here is the XS1 Precision Guided Firearm (PGF), a sniper rifle that features a Networked Tracking Scope, a Guided Trigger, and the Tag Track Xact (TTX) system with an effective range of 1,200 yards. This makes the XS1 “the most accurate rifle on the market today.”

The XS1 lets the shooter tag its target first, then the system will automatically track it, adjust for wind speed, calculate ballistic solution, and ensure optimal alignment. Once everything is in place, all the shooter has to do now is put the reticle on the target and the system will let him pull the trigger. Watch the video below and see how it destroys the HTC One M8.

In addition to the features mentioned above, the scope can also stream video to Android and iOS devices via its onboard WiFi and TrackingPoint app. That should make smartphone-shooting a lot more fun.

I am more interested in the rifle. I check their site and they are charging one starting at around $10K. I would wish if the government could buy at least 100 of these.

A total waste of money

Until they make phones out of KEVLAR, they should stop doing dumb things to their phones

“As expected, it didn’t end well for the Samsung flagship.”

..so bulletproof phones do really exist..