Lenco, a Swiss audio manufacturer now headquartered in Venlo, Netherlands, is almost unheard of locally and even in some part of the worlds, but they’ve actually been around for seven decades making stellar devices like the one we have here, the Lenco BTS-110 Bluetooth Speaker.

The BTS-110 is fairly small in size, merely a size of an average man’s fist, but it’s a tad bigger compared to popular Bluetooth speakers like the regular X-Mini. The majority of its square-ish body is made of glossy plastic which didn’t appeal much to our taste, but the bottom portion, which houses all the buttons, has a somewhat rubbery matte feel to it.

Speaking of buttons, all the usual suspects are present on this wireless speaker. On the front you got a trio of keys for Volume adjustment and a designated key for Play/Pause which can also be used to pick up a call when the BTS-110 is used as a hands-free device.

Over to the right side is the speaker’s Microphone hole which is sandwiched in between the AUX In and AUX Out ports. Meanwhile, the back side houses the Micro-USB port which is used for charging the speaker. It is on the underbelly of the BTS-110 that you’ll find its Power switch, alongside some information about the speaker. The top side, on the other hand houses the speaker grille with a circular metal at the center which doesn’t seem to do anything but to add a touch of flare to the otherwise monotonous top panel.

Usually the lack of an on-screen display makes it difficult to operate a device such as the BTS-110. Luckily, it didn’t bother us one bit when have to pair it with an audio source for the first. Once we turned it on, it immediately broadcasted its Bluetooth signal and our smartphone was able to detect and pair with it almost instantly. There’s another LED light on the other side that signifies the battery status. It doesn’t flash by default, but it’ll give a red light when the battery is about to die which is accompanied by three annoying beeps. The battery LED light turns green once the battery has been fully charged.

Speaking of battery, mileage is probably one of the most underappreciated feature of the BTS-110, or at least that’s what its specs sheet would want you to believe. On average it lasted around 8-10 hours on a single full charge which is three times more than what is listed on its feature set.

For its size, the sound coming out of this wireless speaker is truly remarkable. When cranked to its max capacity, the speaker produces sound that’s loud enough to fill my condo unit, which is not that large by any means, but still big enough for four adults to comfortably live in. 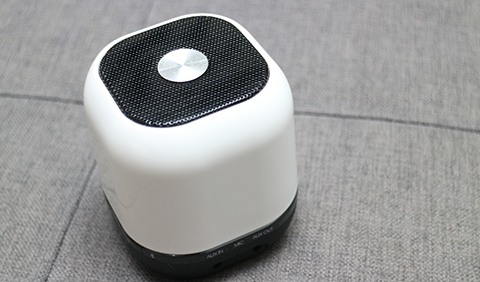 The downside, however, is the audio quality. Although the sound output doesn’t get distorted even at its peak volume, the range of sound is not as clearly defined as we hoped it would be, particularly on the lows and the highs. On the upside, the mid-tones reproduction is quite good resulting to clear vocals and well-pronounced guitar sounds.

Truth be told, the Lenco BTS-110 doesn’t bring anything new to the table that we haven’t seen on other Bluetooth speakers in the past. That is not to say though that it’s not worthy of your time and money, I mean the sound output alone, not to mention the lack of distortion even at high volume, is worth more than half of the price of admission.

We think that the subpar sound range is somewhat forgivable considering its price and the fact that it is a portable speaker, not a full-sized sound system. Still, we think that audiophiles will not give this speaker a second look, but its portable size and acceptable sound performance may just be enough to win over the casual listeners.

The Lenco BTS-110 currently retails for Php2,200 and was made available locally by Reeco Philippines. You check out their listings on this link.

I just bought two of those speakers.
Is there any way to connect the one with the other so they will play simultaneously from my android mobile phone?

This is my first time visit at here and i am actually impressed
to read all at single place.

It’s going to be ending of mine day, except before ending I am reading this
fantastic post to improve my know-how.

I just like the valuable info you supply on your articles.
I’ll bookmark your blog and test once more right here frequently.
I’m slightly certain I’ll be informed lots of new stuff right here!
Best of luck for the next!

“… size of a grown-ass man’s fist” Do you really need to use such language to drive your point?