The smartphone market is already saturated, especially in the budget segment. Entry-level devices have also received upgrades over the years that they’re hard to ignore. Some of them are now equipped with larger memory capacities and more cameras, just like the two devices we have right now — the Huawei Y7 and the Vivo Y11. If you’re eyeing these two devices, check our comparison review to find out which one will give you the best bang for your back. 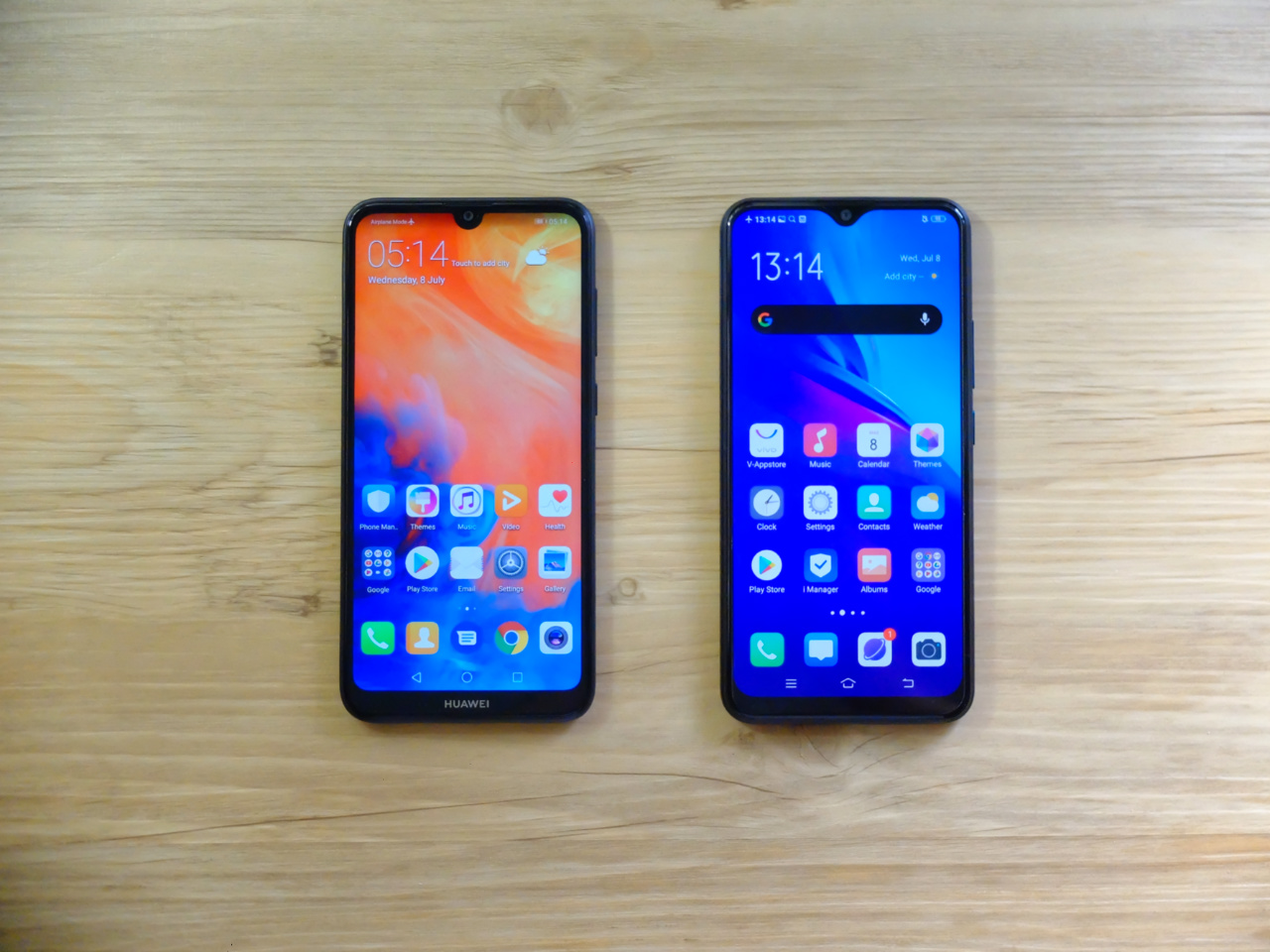 Both devices have plastic builds but with different finish. The Huawei Y7 has a glossy back and matte paint on the side. It comes in two colors — Aurora Purple and Midnight Black, which is what we have now. 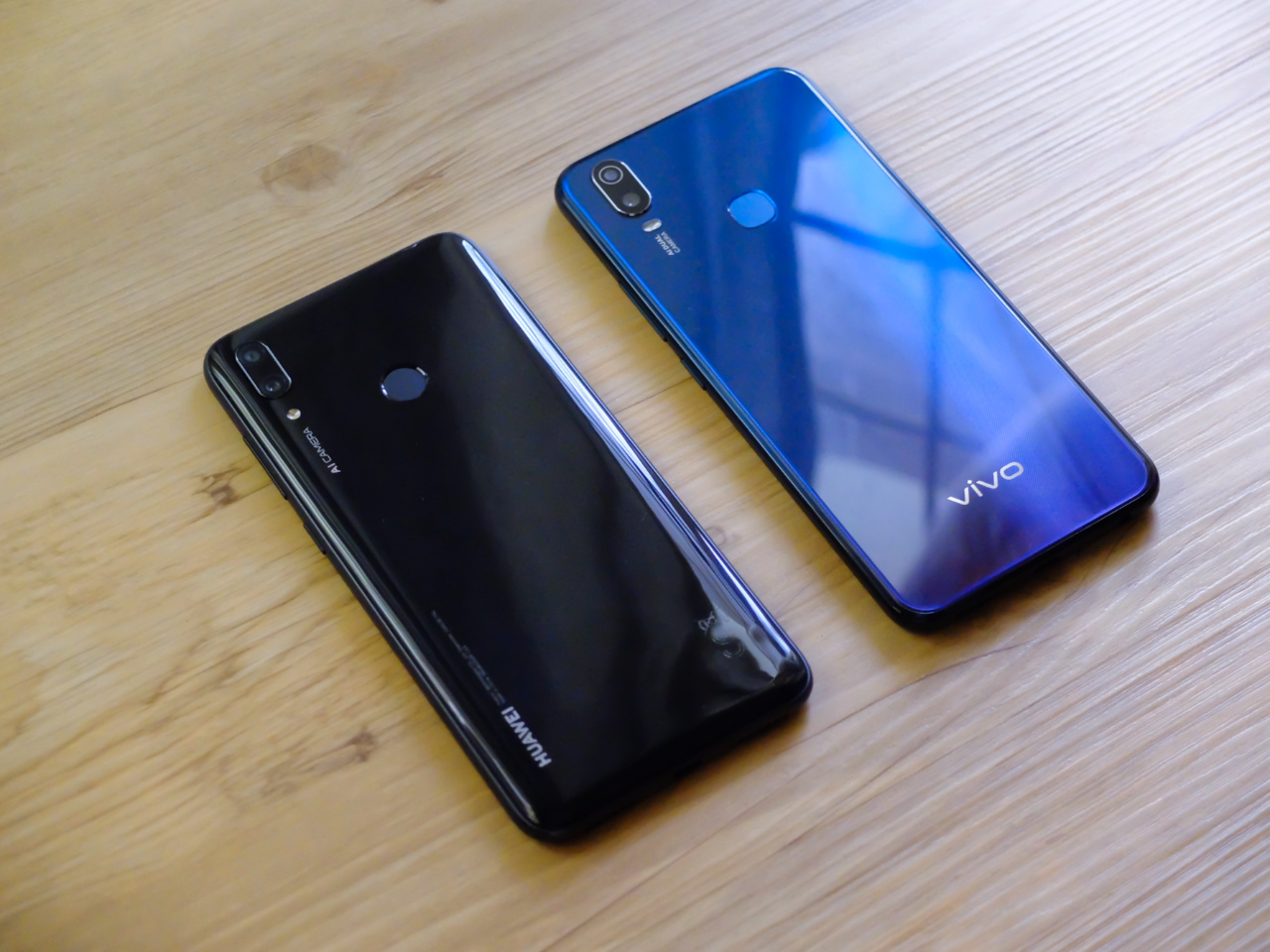 For the Vivo Y11, it has this glass-like back cover with a glossy frame. It comes in three colors — Skyline Blue, Agate Red, and Mineral Blue, which we have on hand. The Vivo Y11 has this attractive design at the back that produces a light effect depending on the angle. And when you look closely, you will notice these fine slanting lines that make it look like it has texture. 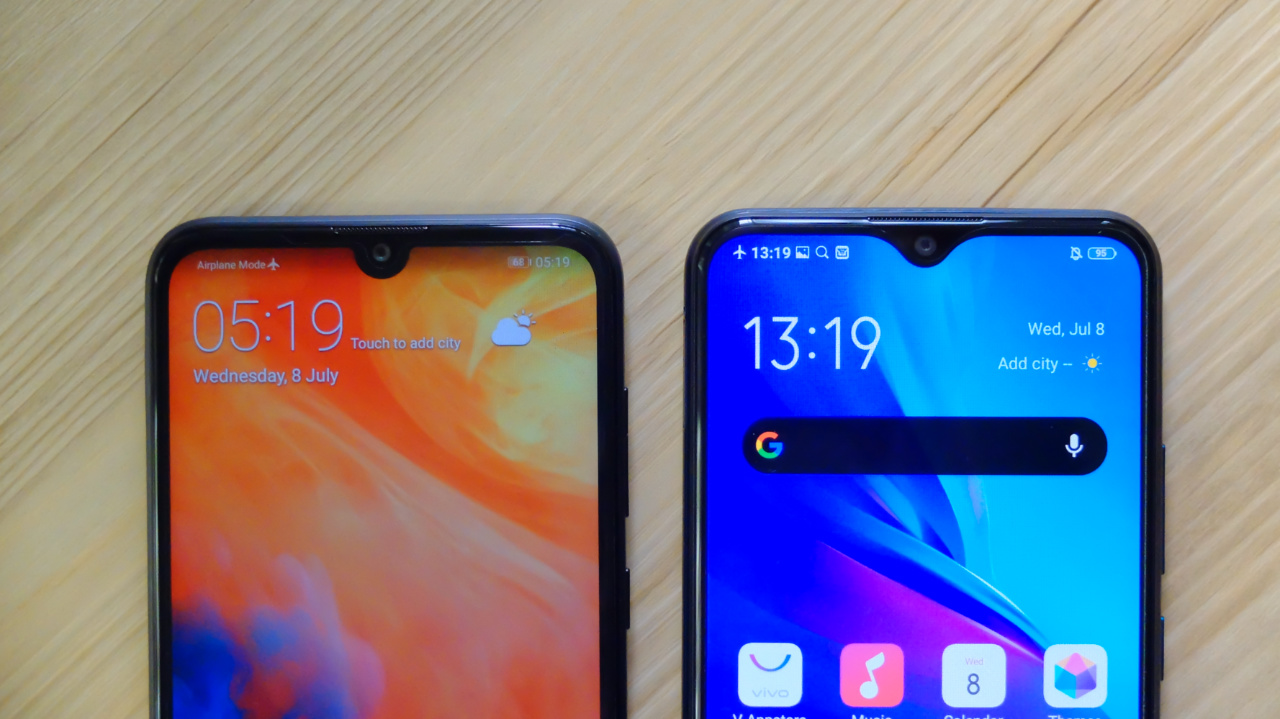 On the front, we can see large screens on both devices with a notch on the top for the selfie camera. Both have thick bezels, especially on the chin. 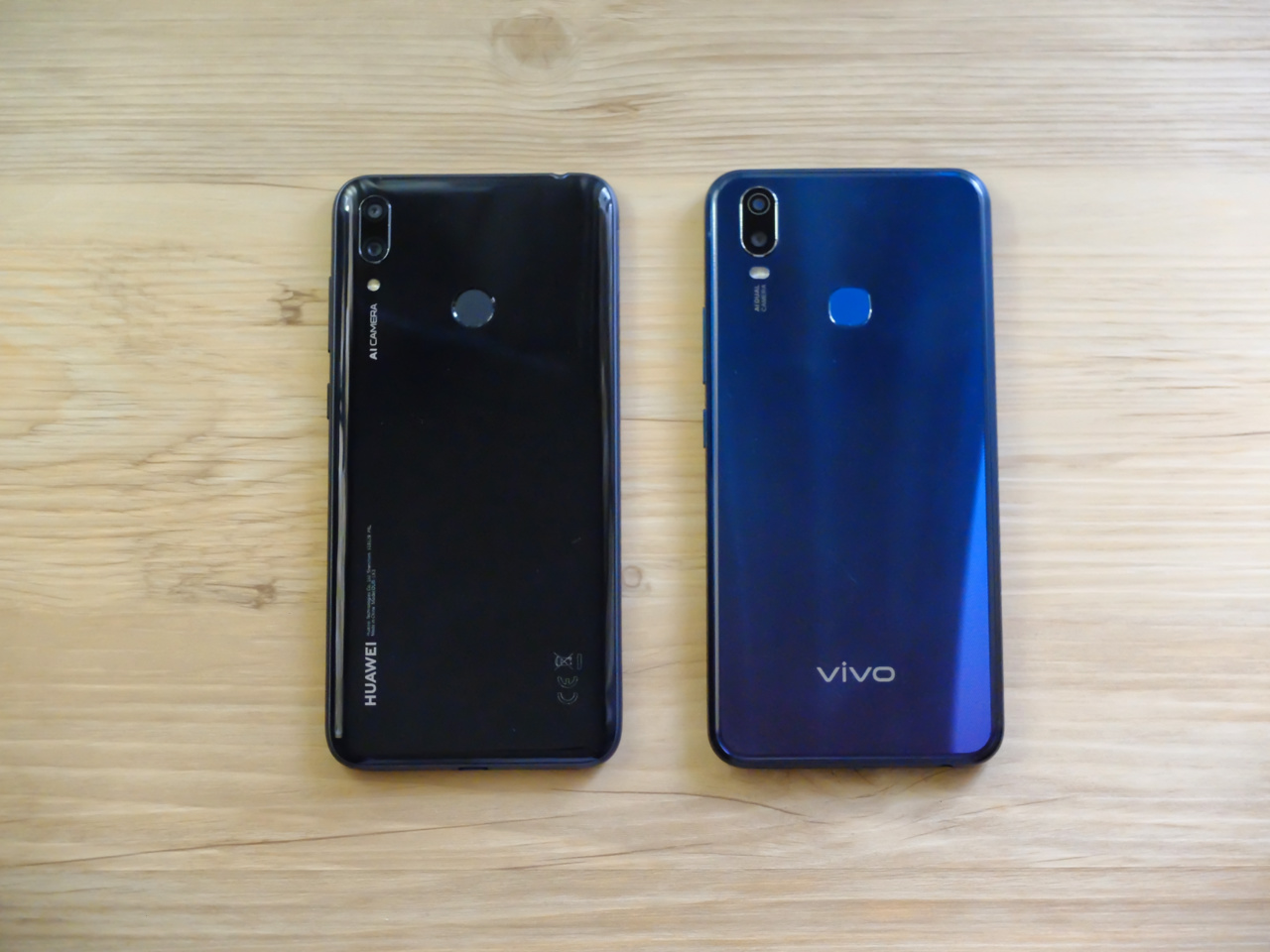 At the back, we have dual-rear cameras, LED flash, and fingerprint scanners. 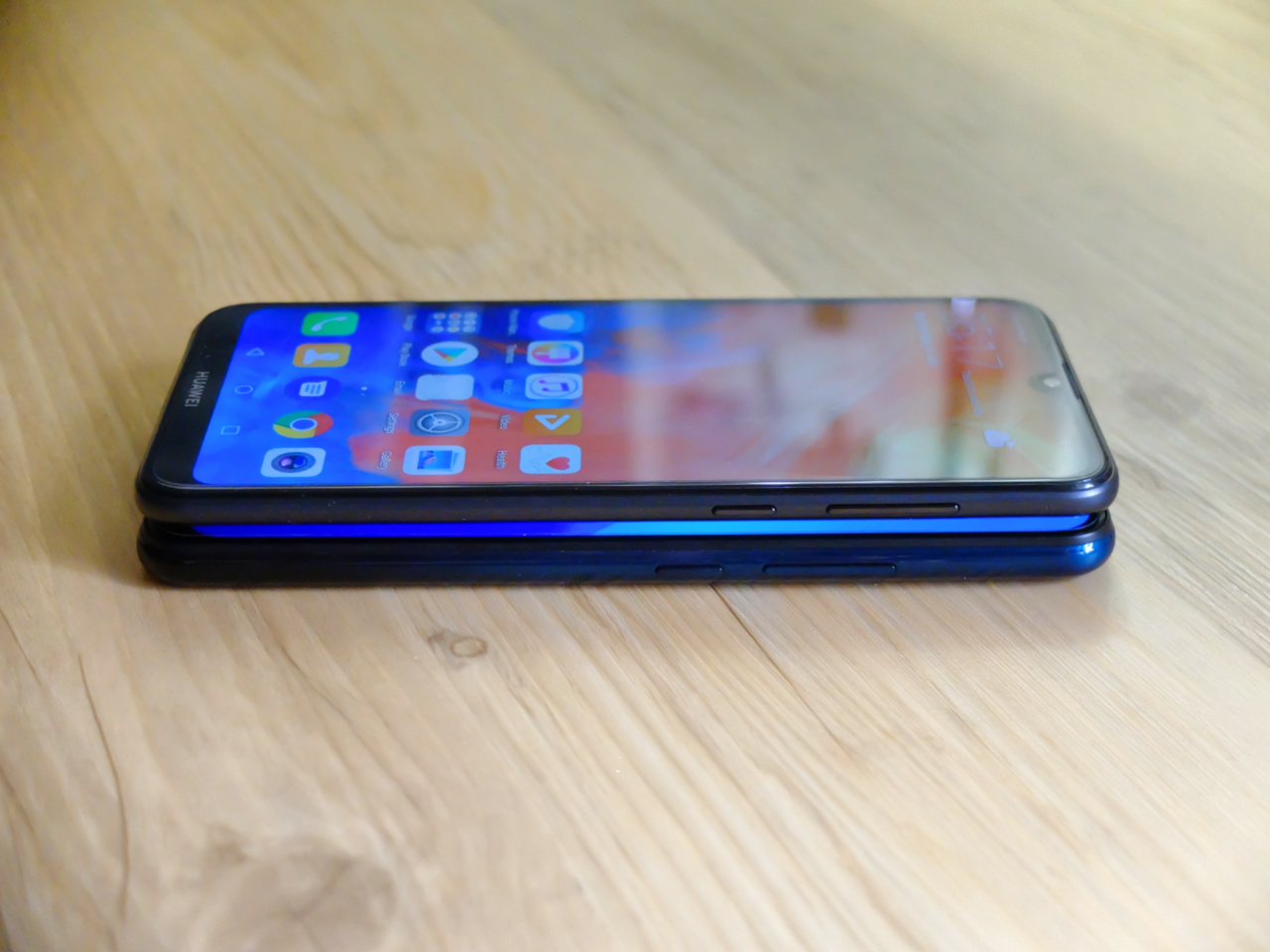 The button placement is the same on both devices with the volume and power/lock button on the right side, and the triple card slot on the left. The usual ports are also available, including the 3.5mm headphone jack and micro USB port. 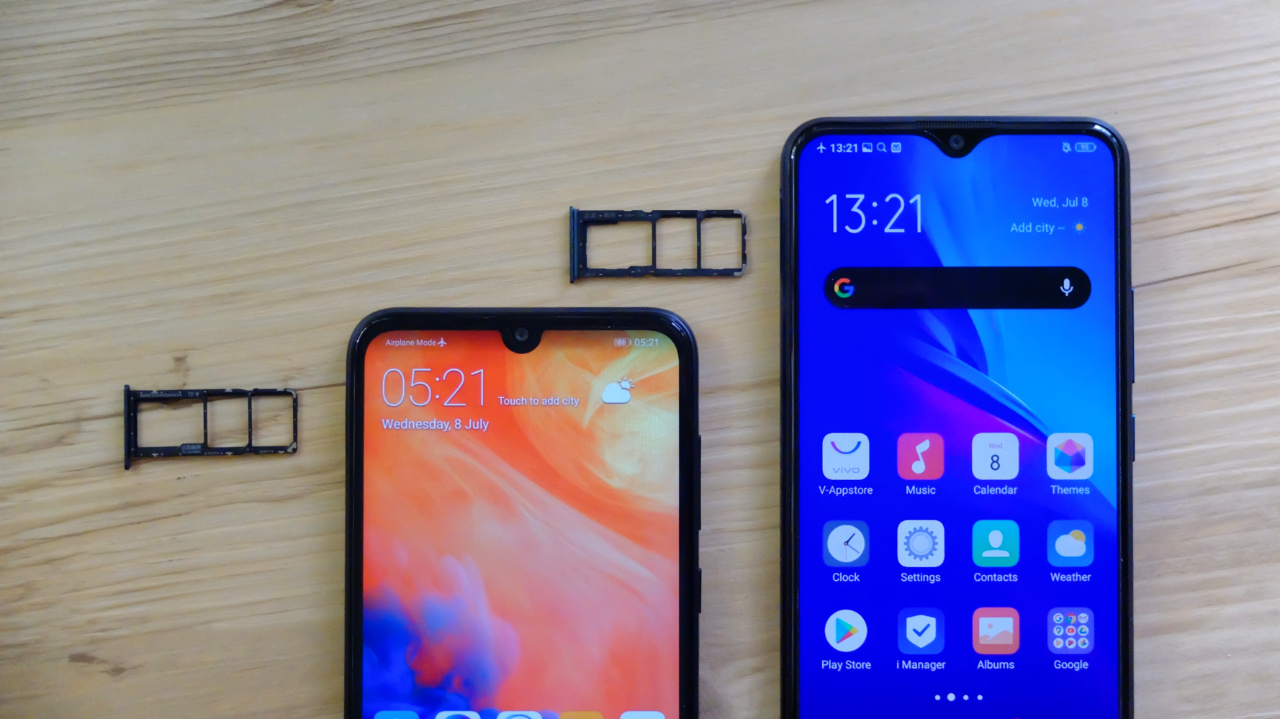 In the hands, the Vivo Y11 feels larger and heftier. It’s 0.8mm thicker and 22.5g heavier than the Huawei Y7. The edges on the front and back also feel sharp, which is a bit uncomfortable. 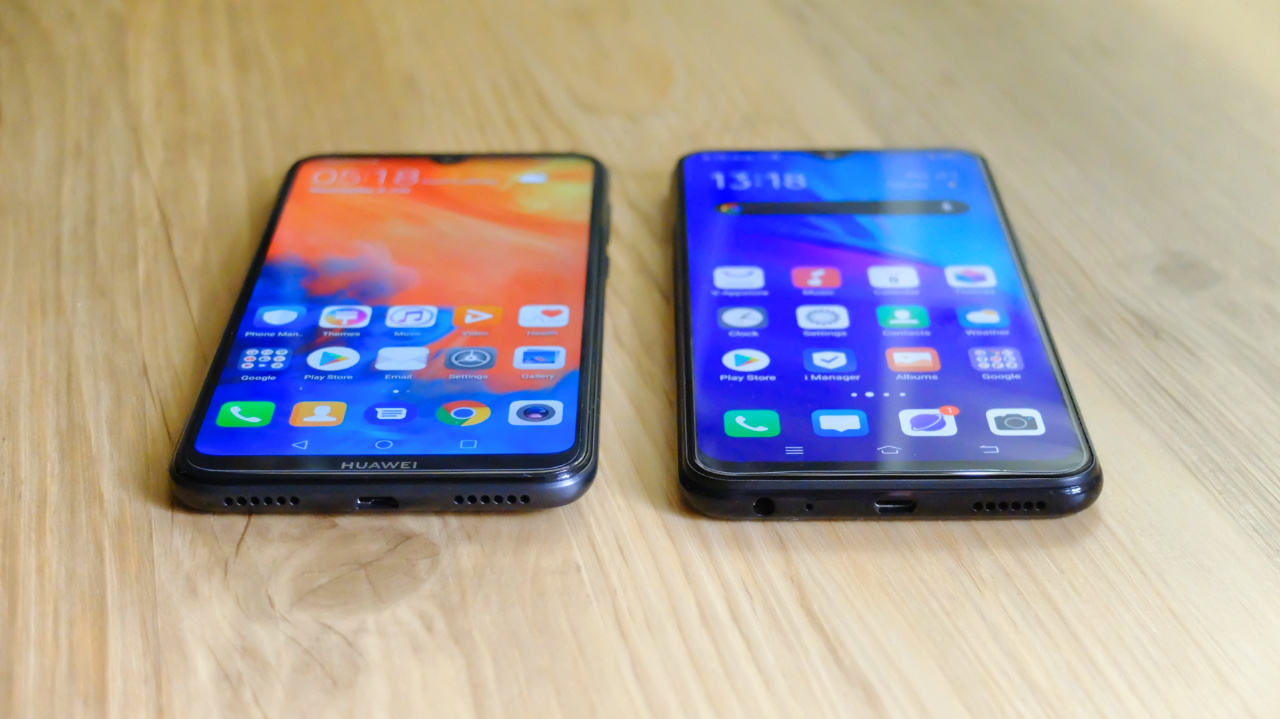 In this aspect, I’m going for the Huawei Y7. 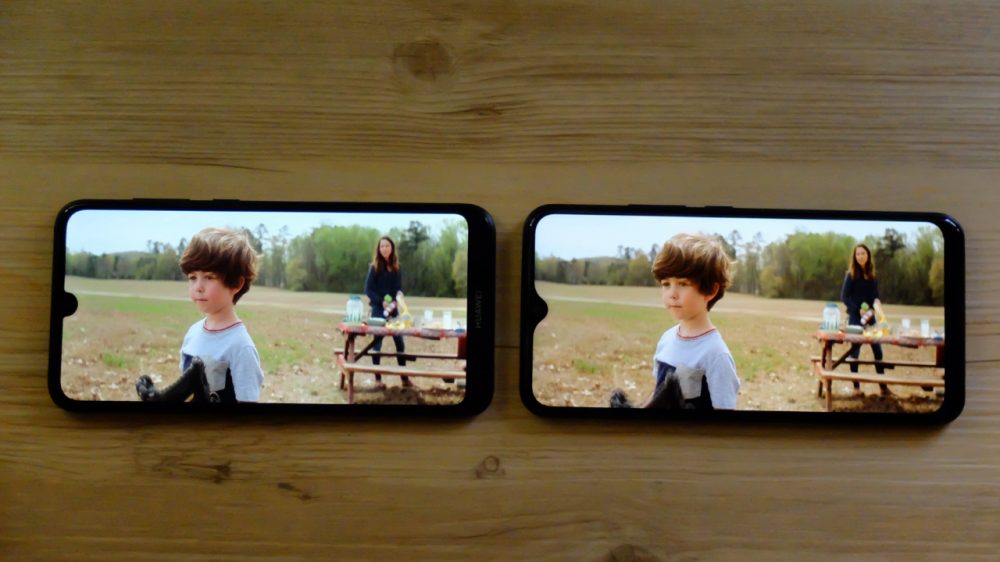 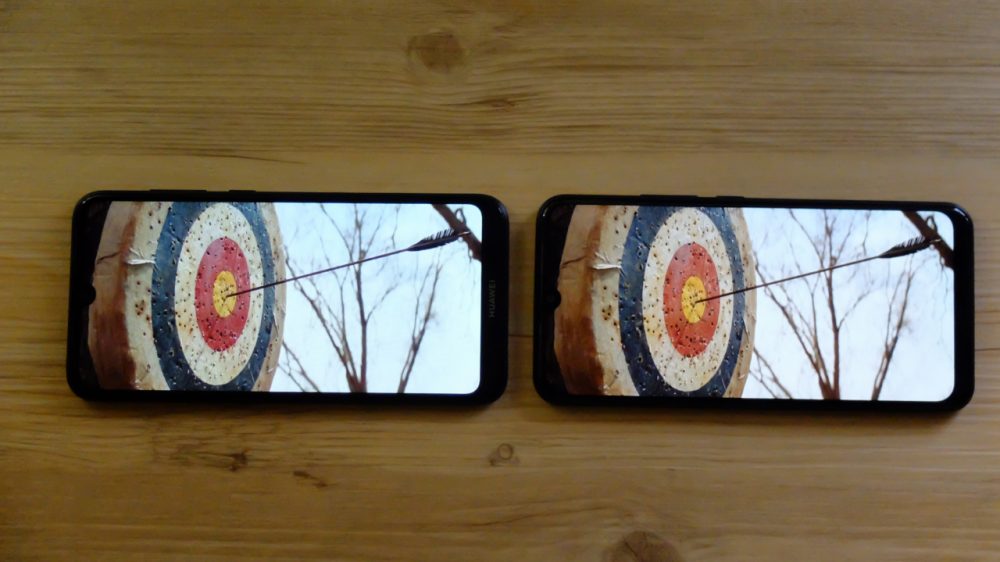 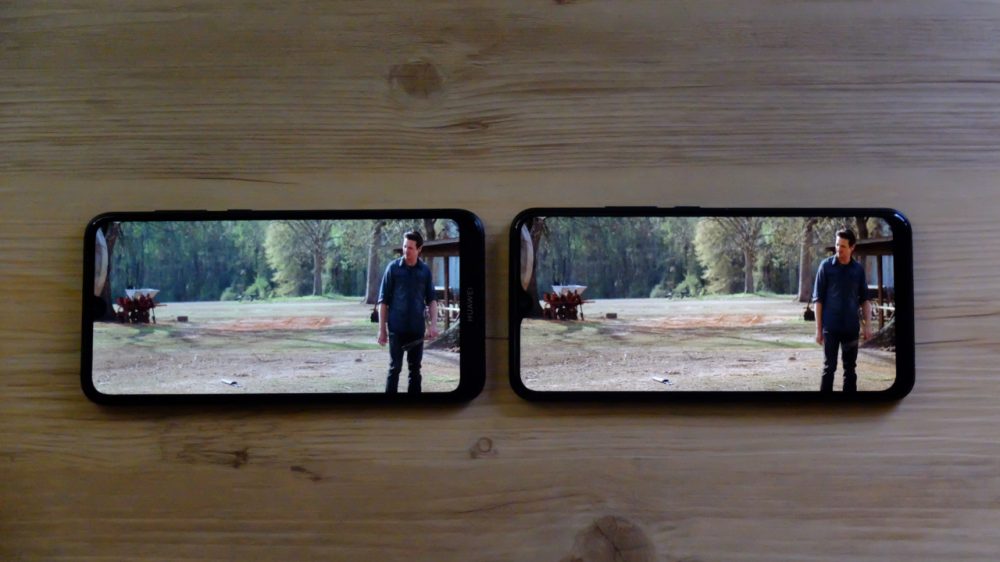 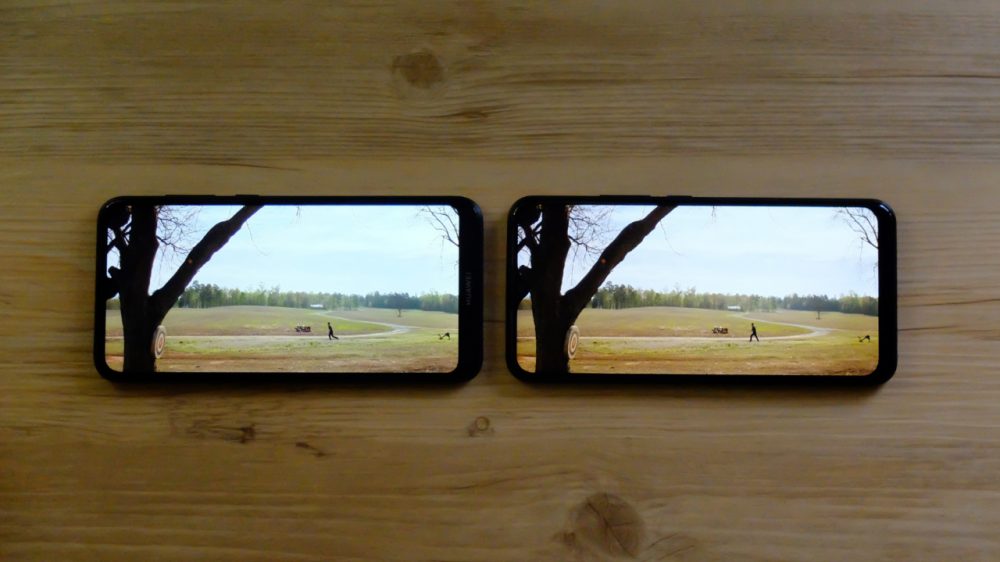 Although smartphones right now have higher screen resolutions, the HD+ resolution is till fine for these devices for casual use. The display quality from both devices is good as they have good colors and vibrant screens. However, we noticed that the Huawei Y7 produces cooler colors, while the Vivo Y11 is warmer. The difference is negligible, though, as we can still enjoy our content without any significant downsides.

In this case, I’m putting points on both the Huawei Y7 and Vivo Y11.

The Huawei Y7 and the Vivo Y11 sport dual-rear cameras consisting of the 13MP primary shooter and a 2MP secondary for depth-sensing. For selfies, they both have 8MP shooters. However, the image quality is different on both devices. 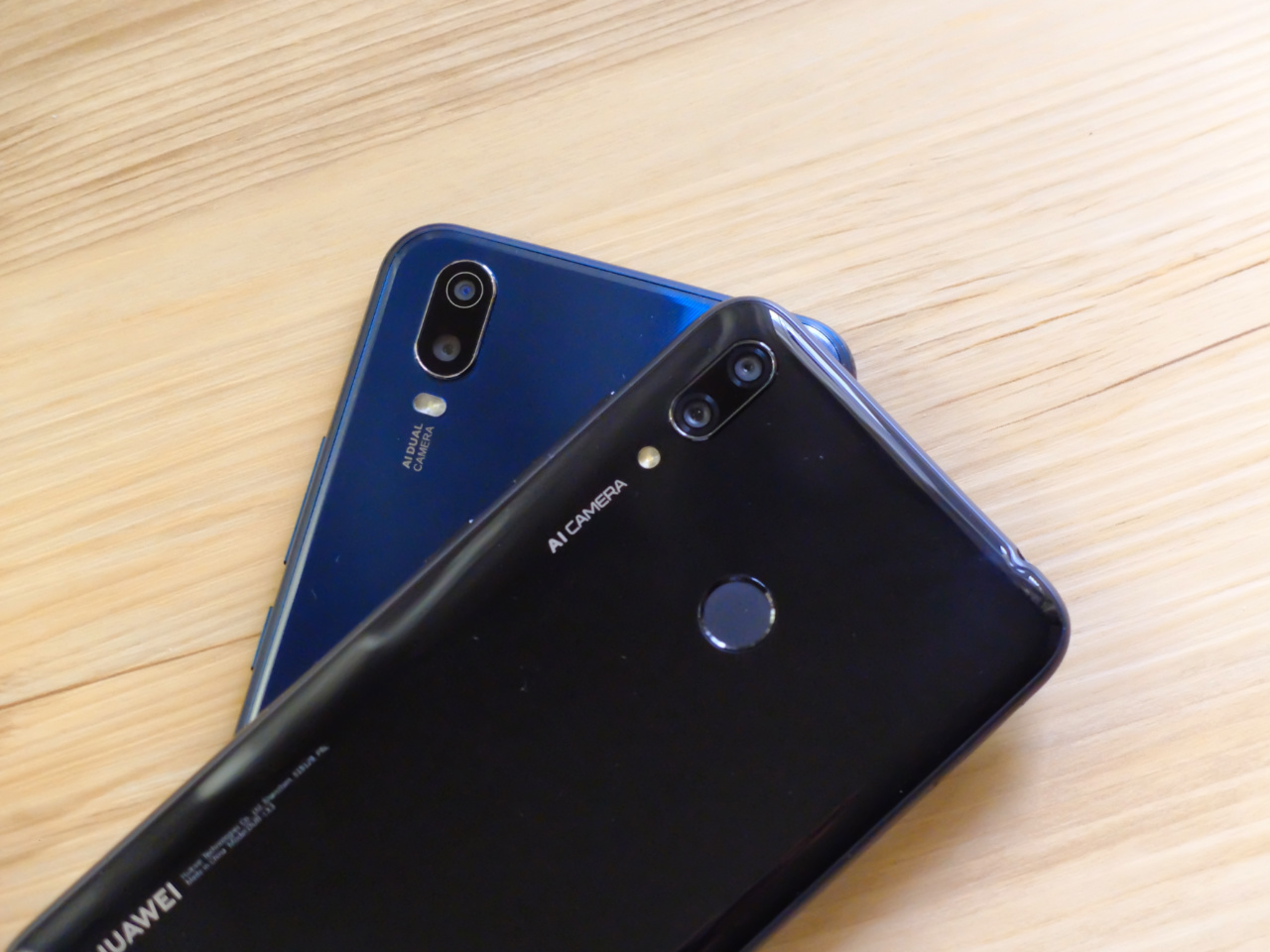 When it comes to outdoor shots, we can immediately tell that the shots on the Huawei Y7 have better colors and contrast. The images are sharper, which you can notice by the details. Colors are also more vibrant, which can be observed in the greens, reds, and blues.


When it comes to low-light, both devices suffer a lot in quality has colors and details degrade and look muddy. However, the Huawei Y7 was better in focusing compared to the Vivo Y11. However, the latter was able to maintain colors well.


As for bokeh shots, both phones were able to produce nice photos with creamy backgrounds. But that is not without any challenges as you have to position your camera at a reasonable distance so it can separate the background from the subject.

Performance is also different as the Huawei Y7 focuses faster compared to the Vivo Y11 that has to readjust a couple of times, especially for subjects up close.

When it comes to selfies, we get a different story. The Vivo Y11 performs better than the Huawei Y7 as the resulting selfies have a more natural color and were able to preserve details, like facial hairs, well. On the Huawei Y7, selfies look muddy and washed out.

The same can be observed with its Beautify feature. At maximum settings, my face on the Huawei Y7 looks artificial and washed out. While on the Vivo Y11, my skin tone was retained, facial hair and some wrinkles are still observable, and my eyes look lively. In other words, selfies on the Vivo Y11 is just more natural-looking.

In this case, I’m giving points on both devices. For the rear camera, the Huawei Y7 wins. For selfies, its the Vivo Y11.

The Huawei Y7 is powered by a Qualcomm Snapdragon 450 chipset with Adreno 506 GPU, while the Vivo Y11 has the Qualcomm Snapdragon 439 with Adreno 505 GPU. It’s worth noting that the SD439 is newer as it was announced in 2018, while the SD450 was announced in 2017. The SD450 was manufactured using the 14nm process, while the SD439 was made on a 12nm. What this means is that the SD439 will perform better while being more power-efficient. 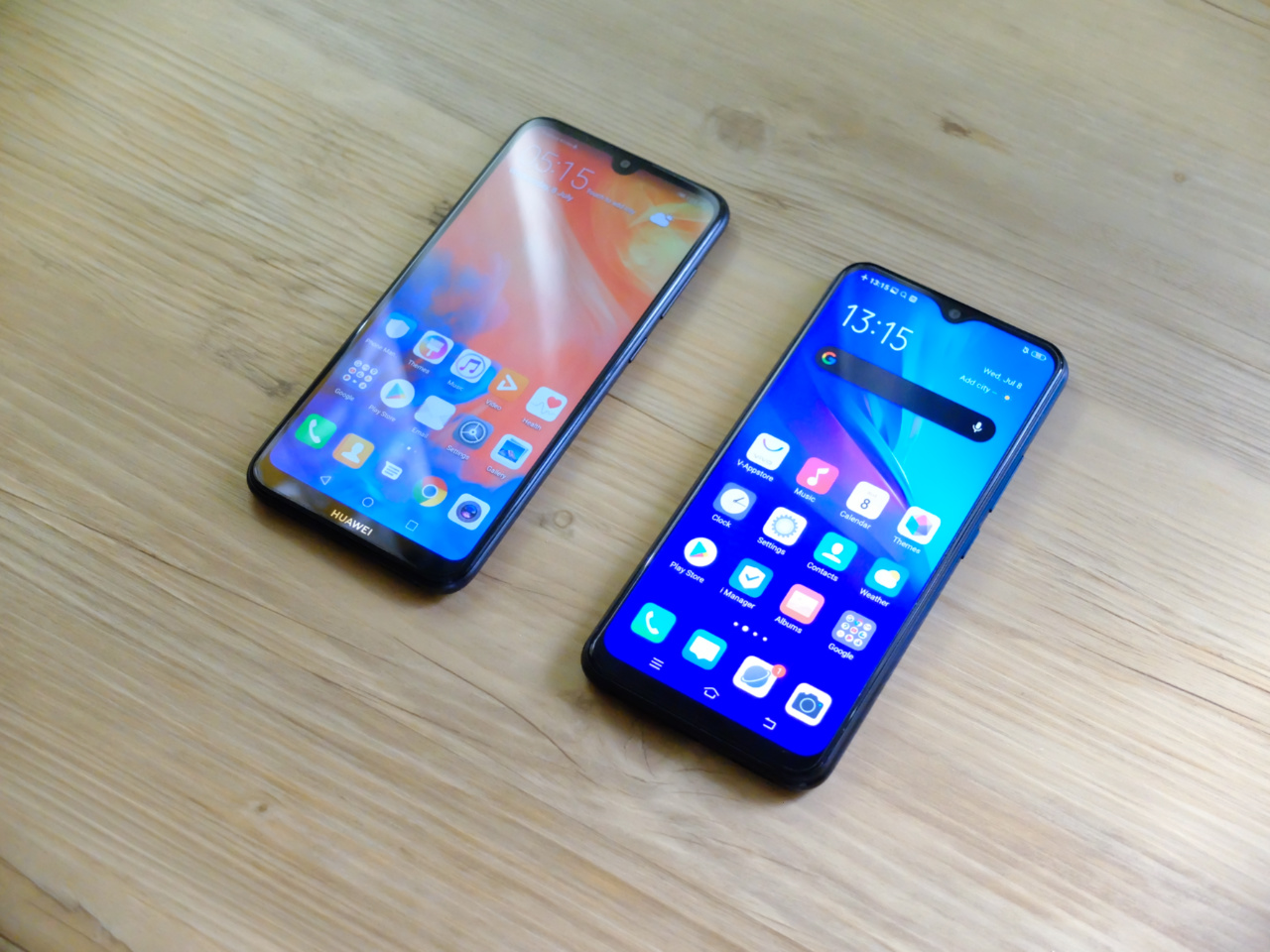 As for the GPU, the Adreno 506 has a higher clock speed compared to the Adreno 505. Theoretically, that would mean that it would perform better when it comes to gaming. Still, the Vivo Y11 performed better in the 3DMark benchmarks, but not by a mile.

Based on the numbers, I’m giving the point to the Vivo Y11 on the choice of chipset. However, users won’t notice the performance difference in daily use.

RAM capacity plays a vital role when it comes to a smartphone’s performance. In this aspect, the Huawei Y7 wins for having 4GB of RAM, compared to the Vivo Y11’s 3GB. This means that the former can handle more background applications, and users will experience smoother multitasking.

The Huawei Y7 wins this part as it has 64GB of storage, compared to the Vivo Y11 with 32GB. Both have the same storage speeds, as you can see in the benchmark scores below. When it comes to expandability, both have dedicated microSD card slots. 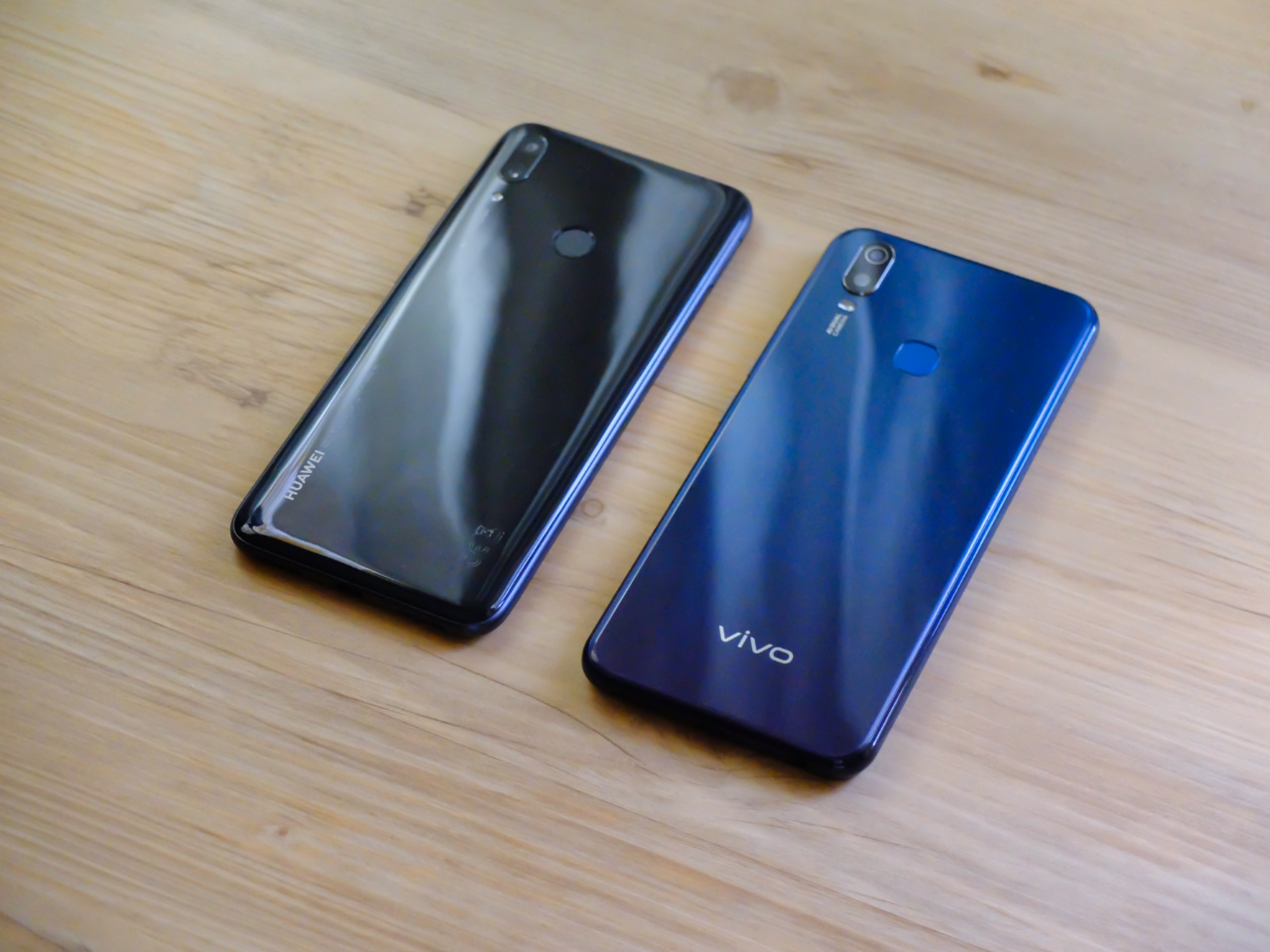 When it comes to capacity, the Vivo Y11 wins at 5,000mAh, which is 1,000mAh more than the 4,000mAh on the Huawei Y7. We subjected both devices to our video loop test, and the Vivo Y11 got a little over 23 hours of playback. However, the Huawei Y7 is not far behind at 22 hours. As for their charging capacity, both units support 10W charging.

The Huawei Y7 runs on EMUI 8.2 with AppGallery, while the Vivo Y11 has Funtouch 9.1 Both operating systems support Google Mobile Services and have their distinct features to make the User Interface functional and more exciting. 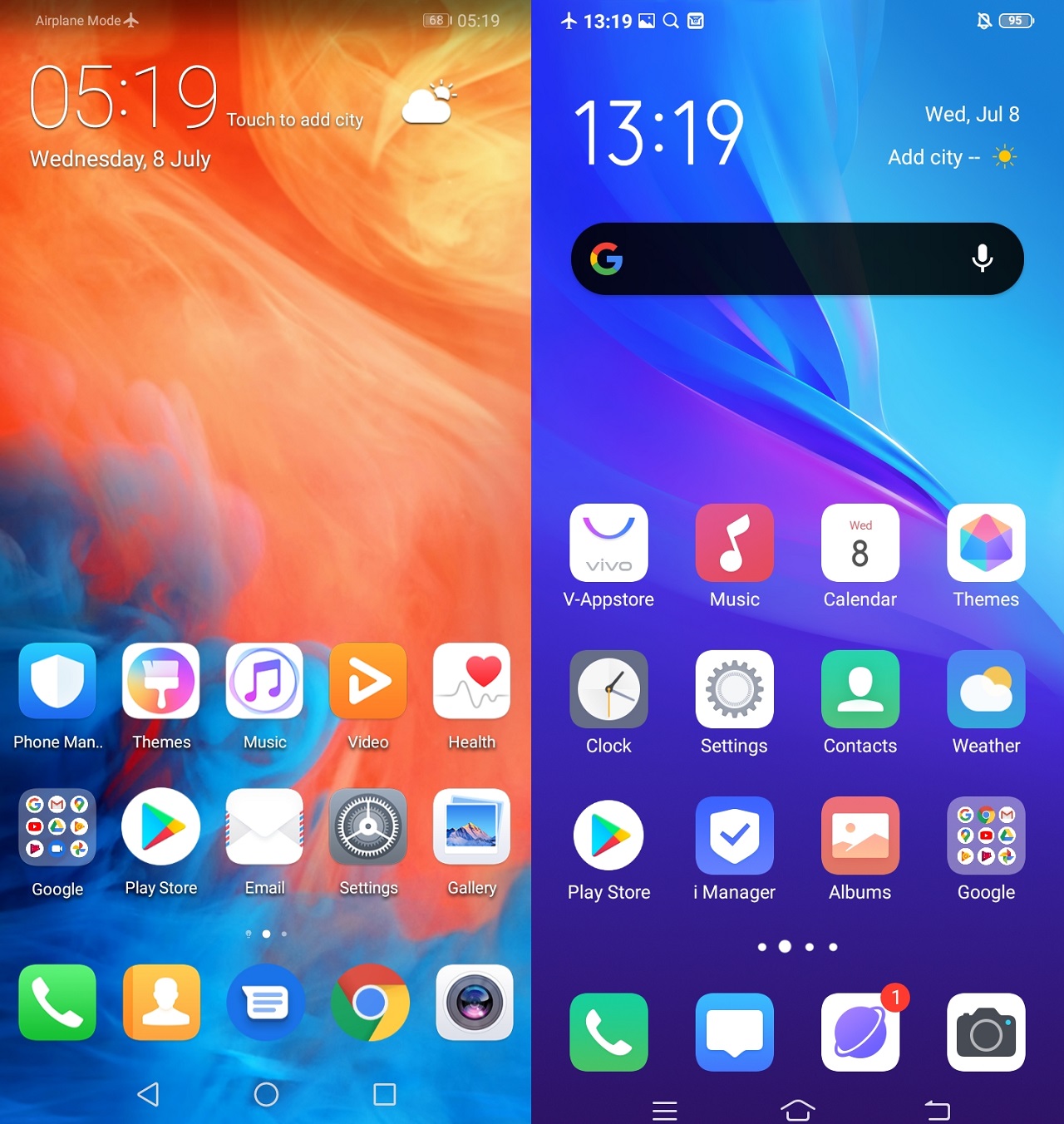 However, we’re going to give credits to the Vivo Y11 as its UI is based on the newer Android 9.0 Pie version, compared to the Huawei Y7’s Android 8.1 Oreo. 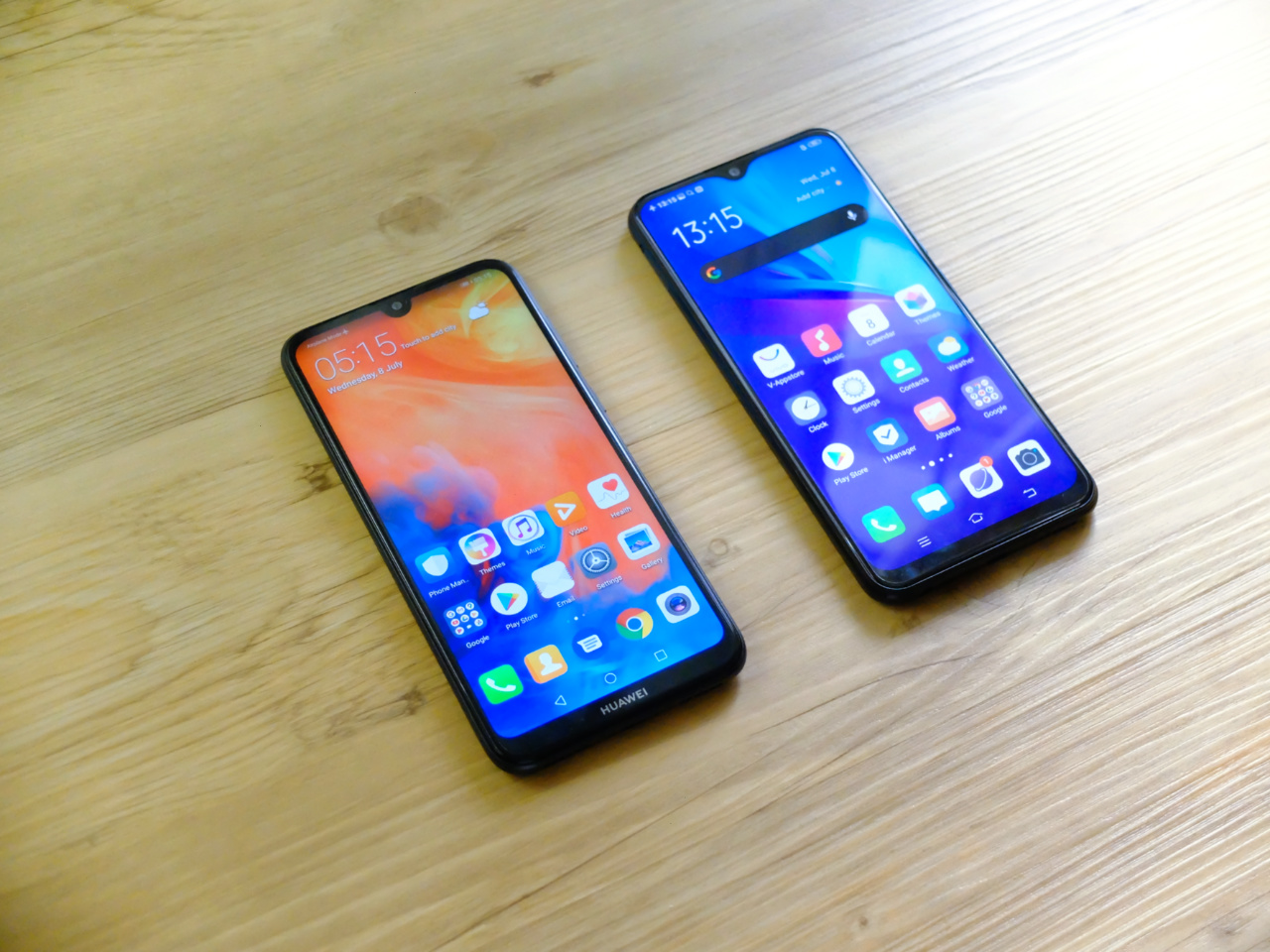 Based on the tally, the Huawei Y7 got 6 out of the 9 categories, while the Vivo Y11 got 5 out of 9 — a close fight. The Vivo Y11 is a commendable budget device for having a nice display, a good selfie camera, and a big battery. However, the Huawei Y7 won in the end for having better rear cameras and larger memory configuration. The battery may be smaller, but 4,000mAh is still large in today’s standards. So, in terms of value, we recommend getting the Huawei Y7.