Financial reports for the 1st half of 2017 for PLDT and Globe came out earlier this week and the numbers are showing the relative performance of the two major players.

While most of Globe’s number continue to go up, their net income experienced a drop by 10% from Php9.0 billion to Php8.1 billion (excluding the charges on the San Miguel acquisition, the net income would have been Php8.7 billion which is just a 4% drop).

On the other hand, PLDT (including subsidiary Smart) posted positive growth in mobile data revenues despite a drop in consolidated revenues for the 1st half of the year. Their net income has also improved — Php16.5 billion from Php12.5 billion from the same period last year, although it’s still lower than the Php18.7 billion they made in the same period in 2015.

Here’s the chart that compares both Globe and PLDT. 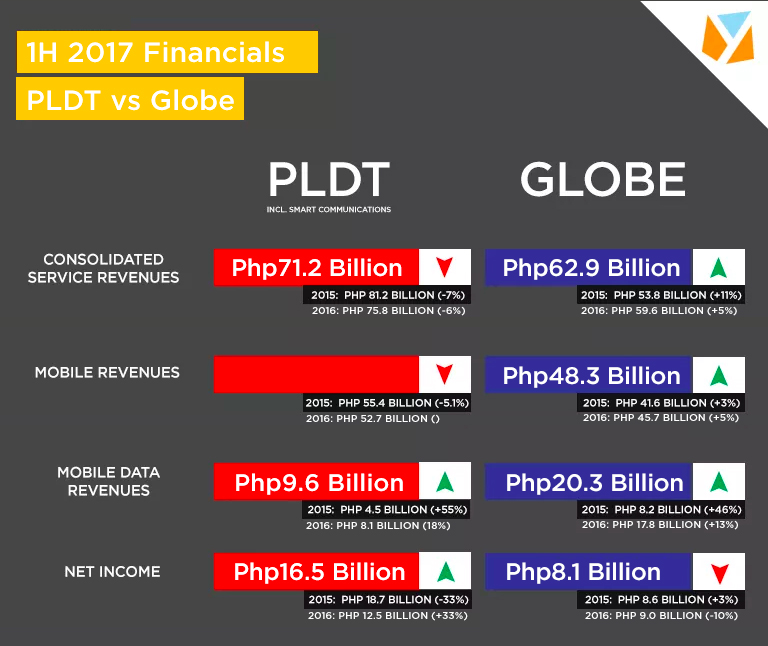 Do note that PLDT has not stated their mobile services revenues for 2017 (although they state this in their 1H 2016 financial report) so we don’t have a figure in that column. Instead, we’re looking at Wireless Consumer Business revenues at Php29.6 billion (16% lower than 1H 2016).

Overall, PLDT made Php16.5 billion and Globe made Php8.1 billion from January to June 2017.