Just when we thought that we’ve seen all that ASUS has to offer for this year, we’ve stumbled upon a pair of unannounced devices that were slated for official launch later this year. One of which is the ASUS MeMO 10 FHD LTE, which we’re fortunate enough to spot sitting quietly at the ASUS’ booth.

Now, you might think that this is just an LTE version of the MeMO Pad 10 FHD which you’ve probably met on our previous post. That’s what the other people thought as well. In reality, however, there’s more about this slate than meets the eye. 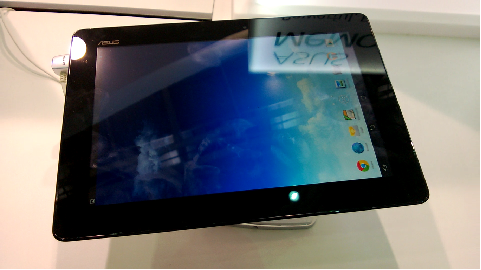 On the onset, everything looks identical between these two tablets and the only noticeable difference is in the make of the back panel. The non-LTE version sports what the Taiwanese firm like to call “micro-weave finish” while the LTE-enabled one has a rather glossy back panel similar to the MeMO Pad 7 HD.

But the main difference between these two slates lies on the inside. The yet-to-be-launched version is boasts a 1.5GHz quad-core Qualcomm Snapdragon SoC which is equipped with an LTE radio. Meanwhile, its non-LTE counterpart is outfitted with Intel Atom dual-core processor with a clock speed of 1.6GHz.

The contrasting features of these two tablets may not be much on paper, but as far as the real-world usage is concern, the difference in the processor is really something to be considered. On one hand, you have better mileage with the Atom-equipped version, assuming that it’ll provide the same, if not better battery life as the one we’ve seen on the ASUS FonePad. On the other hand, you have sizeable tablet with decent specs and has an LTE functionality.

What’s great about this setup is consumers have the option to either go for a tablet with longer battery life or have tablet with 4G connectivity. Unfortunately, you’d have to until the third quarter of this year if you wish to opt for the ASUS MeMO Pad 10 FHD LTE. The exact date of the launch is still a mystery, along with the official pricing.