Panasonic has announced a new wearable camera that is capable of shooting 4K videos at 25fps – the HX-A500.

The Panasonic HX-A500 aims to be the companion of a frequent traveler or outdoorsman who want to record their activities in ultra high-def. While the GoPro seems to be the more popular choice, the HX-A500 takes the advantage at being able to record 4K videos at a smoother 25fps compared to the GoPro’s 15fps. Lower down the resolution and you can capture videos in slow motion: 1920 x 1080 at 50fps, 1280 x 720 at 100fps, 848 x 480 at 200fps. 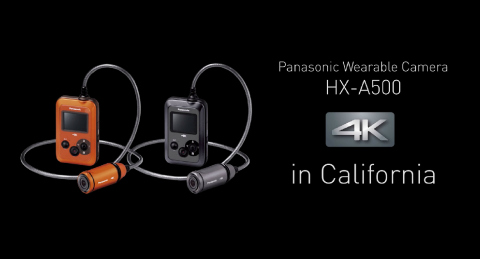 However, unlike the GoPro, the HX-A500 isn’t totally wireless as the camera lens is wired to a body that houses a 1.5-inch LCD monitor and a slew of controls. Other features include a dustproof and waterproof body, EIS Image Stabilisation, Level Shot, WiFi connectivity, and NFC. Users can also connect the HX-A500 to an iOS and Android device via the Panasonic Image app and broadcast live to UStream.