If you’re looking for a gaming laptop, you can be sure that you’re going to get plenty of options. Choosing one can be daunting, but to help you make the right decision, you just have to find the device that is powered by an NVIDIA GeForce RTX™ 30 Series GPU and AMD Ryzen™ 5000 Series Mobile Processor. One good example of such a device is the Lenovo Legion 5 Pro. Why is this the device for the ultimate play? Find out below. 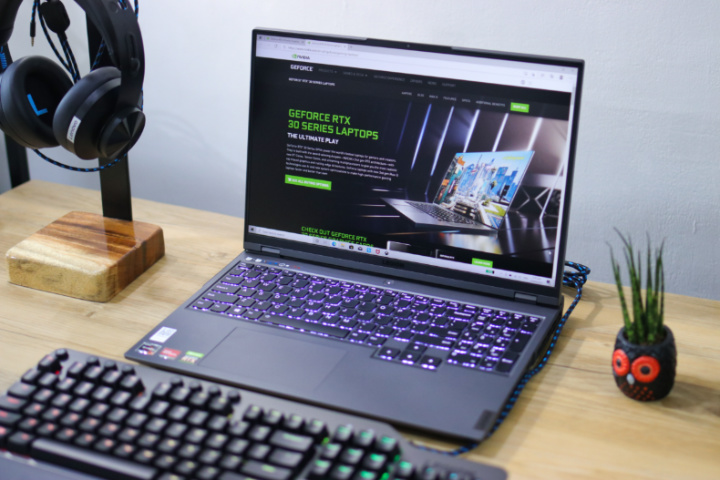 A gaming laptop should have a powerful GPU. In the case of the Legion 5 Pro, it offers gamers the ultimate play as it uses NVIDIA’s RTX 30 Series GPU of up to RTX 3070. The GPU comes with built-in Ampere—NVIDIA’s 2nd gen RTX architecture—with Ray Tracing Cores, Tensor Cores, and streaming multiprocessors to deliver the most realistic ray-traced graphics. It also comes with 140W TGP (Total Graphics Power), which is much higher compared to the low power of other brands. This allows the GPU to enable cutting-edge features such as DLSS AI Acceleration, Dynamic Boost 2.0, Whispermode 2.0, Resizable BAR, NVIDIA Reflex, and NVIDIA Broadcast.

Given the said features, the GeForce RTX 30 Series GPUs drive Lenovo laptops such as the Legion 5 Pro to be the most powerful laptops ever made for gamers. Through it, the Legion 5 Pro is well-equipped to easily handle the latest AAA titles in exceptional graphics quality and high frame rates, as well as to breeze through creative workloads like rendering complex 3D scenes, editing high-resolution video, or live streaming with high-end encoding and image quality. 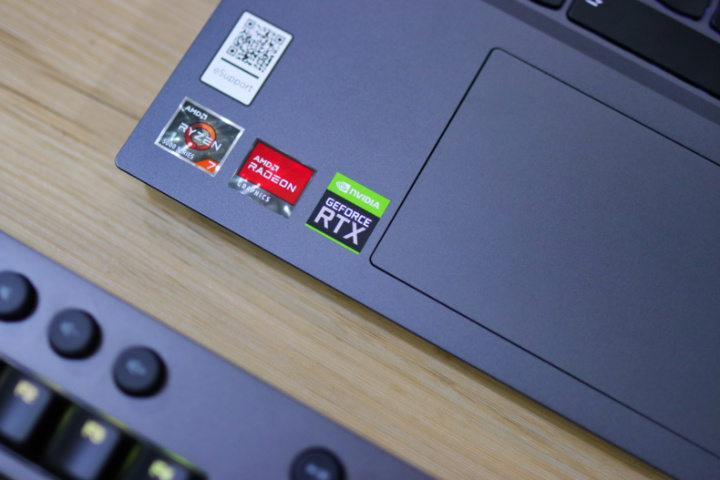 The Legion 5 Pro is equipped with up to an AMD Ryzen™ 7 5800H Mobile Processor (3.2GHz, up to 4.40GHz Max Boost, 8 Cores, 16 Threads, 16MB Cache), one of the best mobile processors designed for thin yet powerful notebooks. These processors are intelligent and power-efficient and feature the most advanced cores in the market. In addition, the Legion 5 Pro also has the Lenovo-exclusive Dual Burn support, which pushes the CPU and GPU together for improved framerates. The result is a gaming laptop that can keep up with heavy demands, whether it’s for work or gaming. 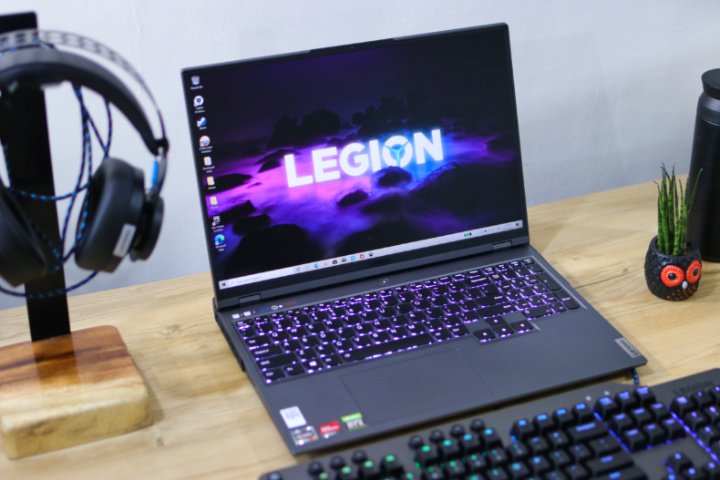 So, you got a powerful processor and GPU inside the laptop, now it’s time to harness that computing power into something you can see. In the case of the Legion 5 Pro, you’re getting a large 16-inch screen with thin bezels, a high-res QHD (2560 x 1600) resolution, a 165Hz refresh rate, and a 3ms response time. This is the world’s first gaming notebook to have a 16-inch QHD display with a 165ms refresh rate.

You’ll also get NVIDIA G-Sync, Dolby Vision, VESA Display, HDR 400 support, and 100% sRGB color accuracy with 500 nits peak brightness. What this means is that you have a screen that performs well for competitive gameplay, yet immersive, rich, and accurate enough for other uses like productivity work, content creation, and entertainment. With great power comes heat. Good thing the Legion 5 Pro is well-equipped to handle high temperatures thanks to the new and intelligent Lenovo Legion Coldfront 3.0. The system employs multiple sensors placed on the CPU, GPU, rear, and side thermal vents, as well as on the SSD memory card and palm rest. These fire off information every nanosecond to predict your system’s thermal curve for hours of gaming with zero throttling. The thermal design also increases airflow of up to 18% gen-to-gen, has an expanded copper heat sink system for up to 82% more thermal fin area gen-to-gen, and drilled copious holes into the laptop’s bottom cover and under the keyboard to keep things cooler. The result is a laptop that can perform at its peak while keeping heat and noise to a minimum. 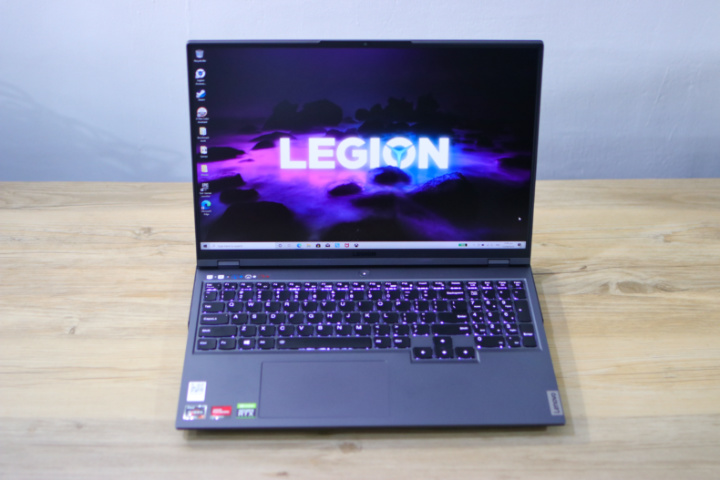 It doesn’t matter if you’re gaming or just working on a document, you need a good keyboard that can provide you with a great typing experience. In the case of the Legion 5 Pro, it features the TrueStrike keyboard with soft-landing switches and a 1.3mm of key travel. It also has dedicated media keys, a Numpad, larger trackpads, and optional individually-lit RGB backlighting. Further adding to the Legion 5 Pro’s capabilities is its embedded Premium Care warranty service that lasts for three years. Made up of nifty solutions such as a 24×7 direct hotline to Lenovo technicians, comprehensive hardware and software support, and an Annual PC Health Check, the warranty service provides an advanced and tailored level of care capable of reducing downtime, increasing efficiency, and enabling users to get the most out of their devices.

Given the features mentioned above, the Legion 5 Pro can provide users with unrestrained performance, whether they’re gaming, finishing office work, or creating content. So, if you want to have a competitive edge when it comes to your tasks, get the Legion 5 Pro powered by NVIDIA RTX 30 Series GPUs.

The Lenovo Legion 5 Pro with up to NVIDIA GeForce RTX™ 3070 GPU and up to AMD Ryzen™ 7 5800H Mobile Processor is now available for pre-order with a starting price of PHP 84,995. Available in either Stingray White or Phantom Blue, the Legion 5 Pro can be availed through Legion Exclusive Stores and Lenovo Authorized Resellers nationwide (lenovo.com/ph/en/where-to-buy/). It can also be purchased at Lenovo Legion’s Official Flagship Store in Lazada (lazada.com.ph/shop/lenovo-legion).

The prices mentioned are exclusive of all taxes & octroi.

Availability: Offers, prices, specifications, and availability may change without notice. Lenovo is not responsible for photographic or typographic errors. Other models are available. Find out more in Lenovo Authorized Retailers Shop.

Trademarks: Lenovo, ThinkPad, ThinkCentre, and the Lenovo logo are trademarks of Lenovo. AMD, AMD Ryzen Series, AMD Radeon, the AMD Arrow logo, and combinations thereof are trademarks of Advanced Micro Devices, Inc. in the United States and/or other markets. NVIDIA, GEFORCE, GEFORCE RTX, BATTERY BOOST, and G-SYNC are trademarks of NVIDIA Corporation. Other company, product, or service names may be trademarks or service marks of others.