One of the most dominant features that we saw in the recently concluded Mobile World Congress in Barcelona is the shift of a lot of smartphone brands to the wider screen aspect ratio. Many of them stuck with the standard 18:9 aspect ratio (LG, Xiaomi, Sony, OPPO, VIVO) with a few exceptions (Samsung uses 18.5:9, iPhone X has a 19.5:9 and the new Zenfone 5 has 19:9). 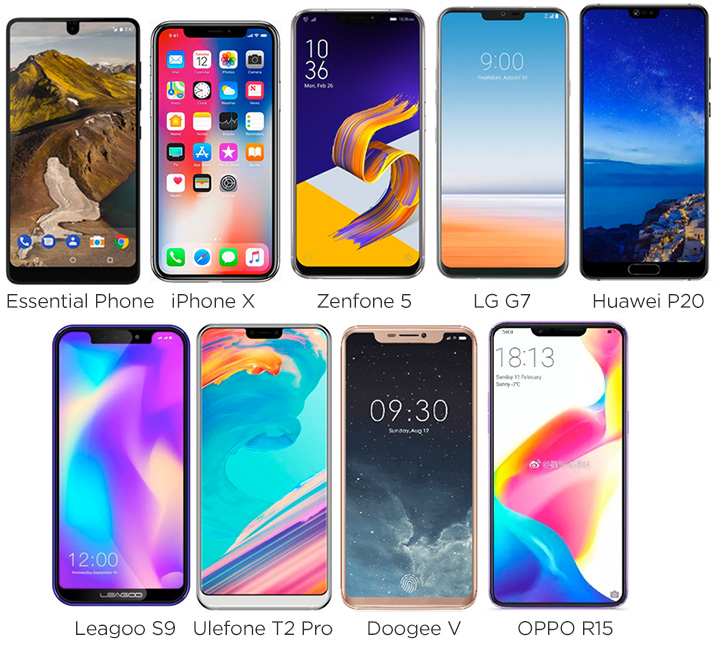 Another controversial trend is the direction to leave a notch on the upper corner of the smartphone display.

The notch originally appeared in the Essential phone (contrary to common belief that it was the iPhone X that started it) back in May 30, 2017 and popularized by Apple’s announcement of the iPhone X in September 12, 2017.

Come to think of it, the LG V10 and V20 also had a notch though it’s not in the middle but on the left side of the secondary display.

OPPO even filed for a patent on the notch in China much earlier, in Janaury 9, 2017.

So almost everyone who revealed a smartphone in MWC has a notch — Asus, LG, Leagoo, Doogee, Ulefone. That’s on top of the leaked photos of the Huawei P20 and OPPO R15 that will also have notches.

Why the fascination with notches?

It’s one way to reduce the size of the bezels and maximize display size without increasing the dimensions. Likewise, there’s no need to re-orient the essential components and sensors that are supposed to be placed in that corner of the phone.

The only compromise would be the aesthetics of the display. So, while almost everyone is thinking of going the notch way, they waited a while and see how people would react to the notch on the iPhone X. In a way, Apple normalized the notch. And bravely. Just like the headphone jack.

It’s ugly. It’s only there because the engineers at Apple can’t think of a way to put the camera and sensor underneath the glass so they just started a this dumb notch trend that everyone follows just like when they removed the headphone jack.

Because the next revolutionary feature is to place the camera behind the screen.

The notch is just pure laziness on the part of R&D and Engineering. Surely, there’s tech that won’t require a notch.

It’s an ugly trend which I hope will go away soon, The notch is a means of shortcut. its just lazy design IMO. Fortunately, Xiaomi is boldy trending the right path with their Mi Mix line. here’s hoping Xiaomi succeeds in showing them how its supposed to done.

The bigger question is if these copycat phones actually need to have a notch. On the iPhone X, the notch is there because of the FaceID 3D scanning contraption