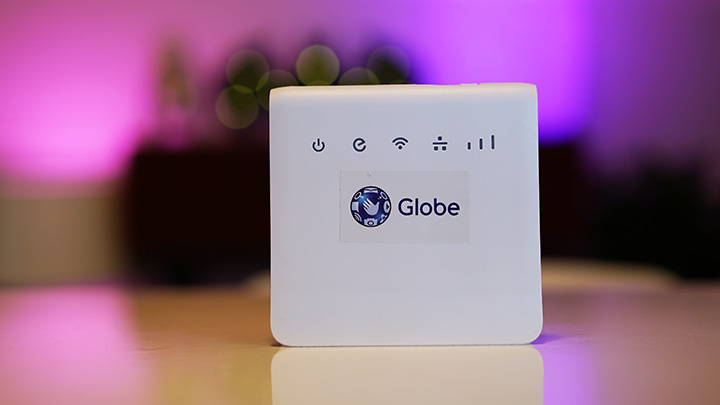 We’ve been using the device for about a month now so we’ve pretty much had a good grasp of its purpose and value. This is actually the 3rd model we bought in the past 3 months (one in the office, another in our video studio and one in my condo).

The modem is a small, white plastic router which is about 6 by 6 inches in size and about an inch thick with the base slightly thicker in order for it to stand upright. 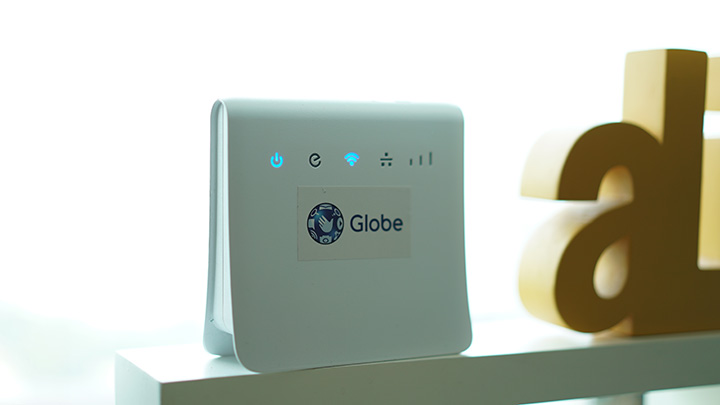 We’re not sure who manufactured the device (not Huawei, ZTE or Zyxel) actually and Globe merely attached a logo sticker in front and instruction manual at the back. (Update: We’ve been told by the supplier that the manufacturer is the Shanghai Boost Even Technology Co.)

Up at the front are LED lights for power, internet, WiFi, LAN and cellular signal. There’s a WPS/Restore switch up top along the ventilation grills. 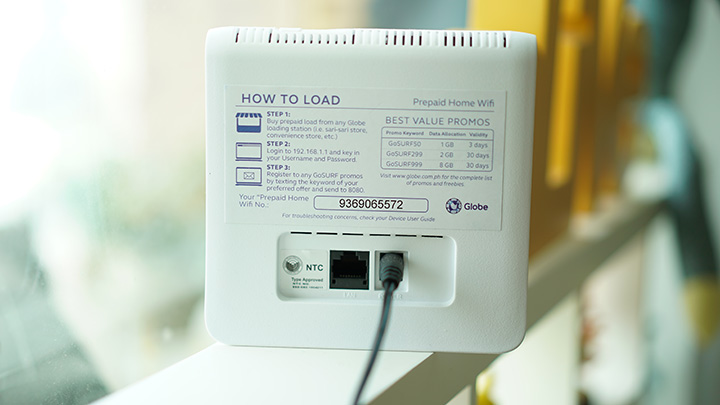 At the back are the power port, the single LAN port, an NTC sticker and the “How to” guide for reloading and surfing promos you can subscribe to. The mobile number is also written there so you don’t have to remember it. 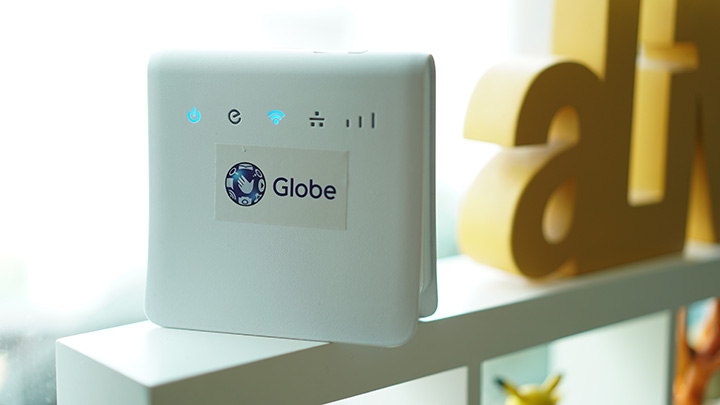 The prepaid SIM card is already inserted in the tray at the bottom of the device with a “Do not tamper” sticker. Globe claims you can’t just put any other SIM card in there as the device has been configured to work with the SIM it came with.

Administration and control of the WiFi router can be done via the browser of any device connected to the router. The admin page is accessible via the local IP (192.168.1.1) and the default username and password (admin/admin) are indicated in the sticker at the bottom of the device. 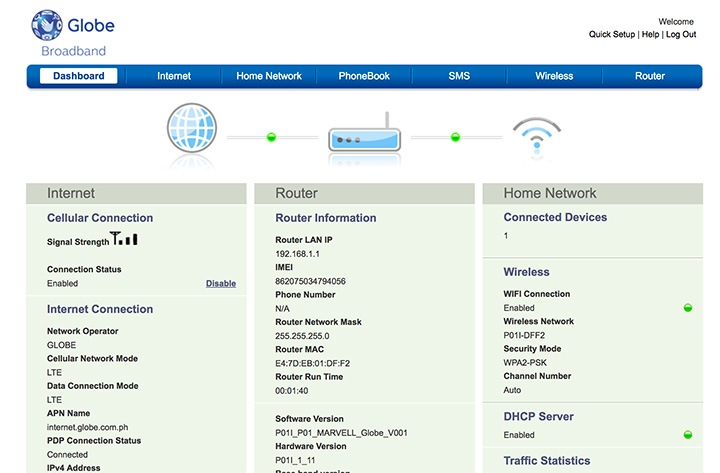 Once logged in, all the settings are already pre-configured. The main page will show the status of the cellular connection (and signal strength), router status/information and network information. You don’t need to touch anything here are everything is all set up for you.

The only section that you will have to regularly use would be the built-in SMS feature. this is where you send out text messages to subscribe to GOSURF and SURPERSURF promos. 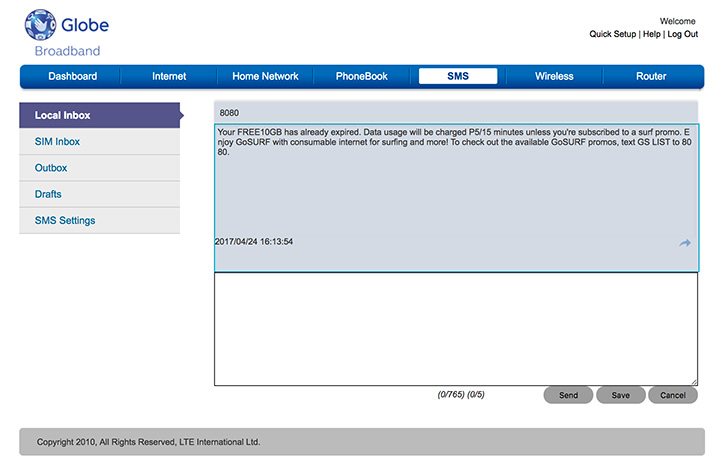 The kit comes with 10GB of data allocation that lasts for 7 days from the day of activation. After that, you can just reload it and subscribe to specific Globe GoSurf promos. This is what Globe is pushing but they never say that you can actually also subscribe to SuperSurf promos (SUPERSURF 50 for 1 day, SUPERSURF 120 for 3 days and SUPERSURF200 for 5 days). Of course, it is limited (1GB per day) by Globe’s FUP for prepaid users.

Since this is still a wireless connection, the speed is very dependent on your location and the time fo the day. It could be faster at certain times of the day due to the peak hours of network usage. This is the same as with your mobile internet connection. 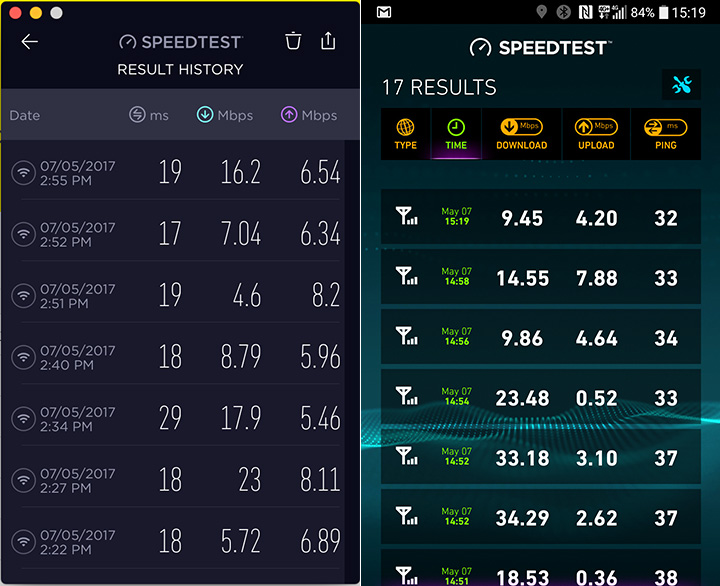 During our 1 month of testing, we’ve only used it in Taguig City, Makati City, and Pasay City. We have not had a chance to take it outside Metro Manila. In the locations that we’ve tested it, the results varied from 4Mbps all the way to 23Mbps.

We noticed that adjusting the placement of the LTE router within the house (or even the mere repositioning) would also yield different results. 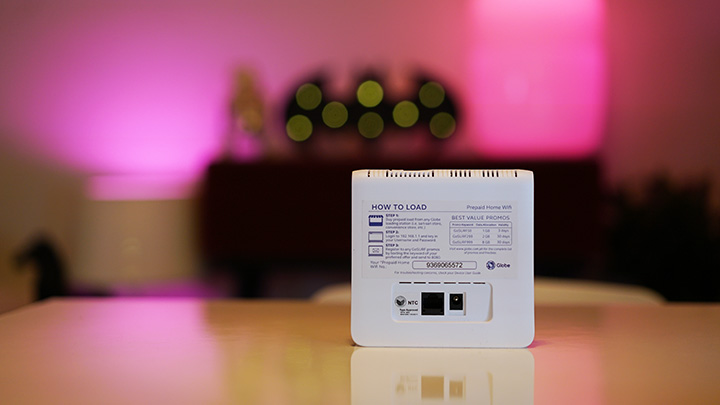 As for cost implications, the mobile internet that’s offered via Globe Home Prepaid WiFi is more expensive compared to the bandwidth you are paying if you are on DSL or fiber.

The device itself can be had from any Globe Business Centers for Php1,999 and it comes with 10GB free data upon activation. 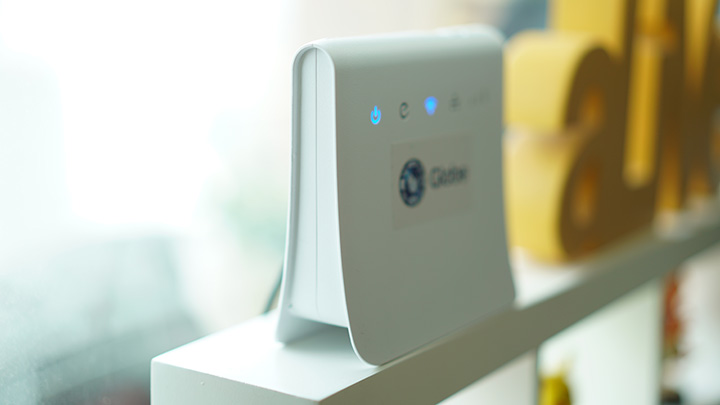 I have a vDSL connection at home and while the download speed is fairly good (10Mbps), the upload speed leaves a lot to be desired. In some cases where I needed to upload a huge video on YouTube (for the 7-9 minute full HD video reviews), I resort to a different connection. Normally, my mobile internet is faster and can go between 10 – 15Mbps on a normal day. But that would mean I have to leave my smartphone as a mobile hotspot and home I don’t receive any phone calls during the session (LTE drops when you receive calls).

The pricing structure for the Globe Home WiFi is basically the same as mobile prepaid plans. There’s a flat rate of Php5 per 15 minutes if you do not subscribe to any GoSurf or SuperSurf promos. The GoSurf pricing scheme might be good if your activity is time-bound, like downloading a large file, streaming videos or you just want to work for a specific number of hours without worrying about how much data has been consumed. This option is also better if there are several devices or users connecting to the router.

SuperSurf may be a good alternative option if you want to stretch the usage from an entire day to several days (maximum of SuperSurf200) with light usage.

The Globe Prepaid Home WiFi is not meant to be the primary source of internet at home or in the office. What it offers is a cost-effective, portable, and easily configurable ad-hoc internet connection during emergencies (when you main wired internet is down or slow).

What we find it very useful is for fast upload speeds and, though not everyone is in the habit of uploading gigabytes of content online, our line of work here calls for it very often (Dropbox syncing of raw photos and videos, uploading to YouTube of finished 1080p video reviews).

In a way, the device is a reasonable alternative to the pocket WiFi since it’s more robust and affordable. There are other similar LTE WiFi devices out there (made by Huawei and ZTE) but this one is fairly affordable.