The Acer Liquid X1 first made an appearance in June 2014 and was launched in the Philippines in August. It’s an old flagship device that features a 5.7-inch display, MediaTek octa-core CPU, LTE connectivity, rear key, and Android Kitkat. Is the Liquid X1 still worth getting considering the competition in the same price range. Find out by reading our full review. 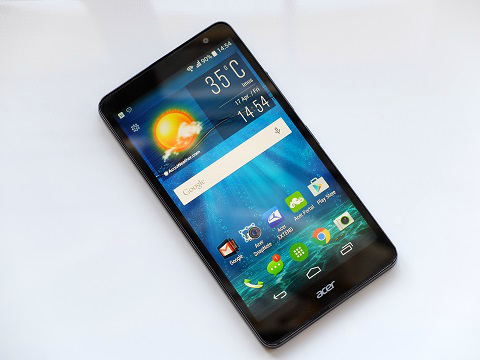 The Liquid X1 is basically what you can easily call a “phablet” thanks to its large display. On the front we have the 5.7-inch screen mounted with Corning Gorilla Glass 3. Situated above it is the 2 megapixel front facing camera and light sensor. Just above it where the glass ends are the earpiece and notifications light. Down below is the Acer branding and the front-facing loud speaker. 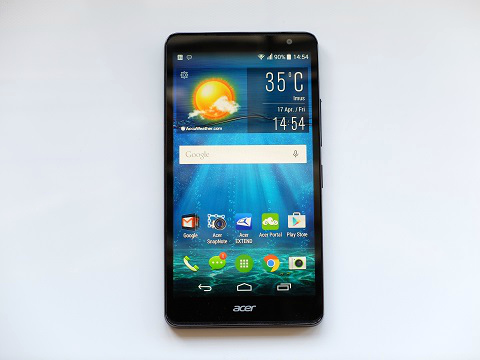 Found on the right side are the microUSB port, volume rocker, and power/lock button. Right up top is the headset jack and pinhole for the microphone. Down at the bottom is another microphone for voice calls. 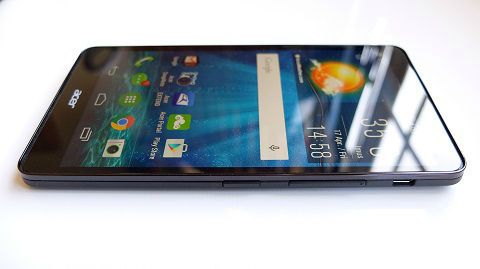 Flip it on its back and you will see the 13 megapixel camera, LED flash, and the circular key which can be used to launch the camera and as a shortcut key for an app. The plastic back plate can be removed to give you access to the removable battery, SIM card tray, and microSD card slot. 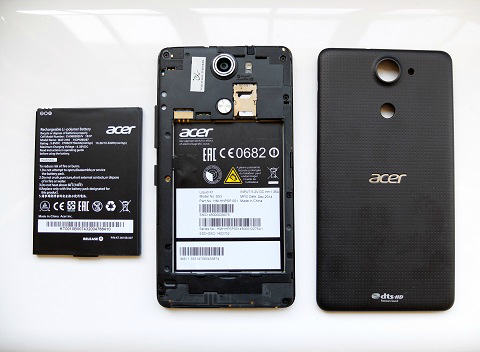 Although large, the Liquid X1 can still be held comfortably with one hand although navigating the UI and fully utilizing the screen would definitely require both hands. It is relatively slim at 8.5mm thick and is mostly made of plastic which keeps it at a not so hefty 164g weight. 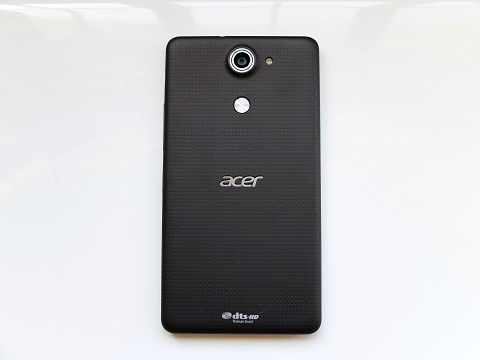 Design-wise, it’s not fancy but doesn’t look bad for a phablet as it looks and feels sturdy. The top frame has a glossy finish while the rest of the body has a soft rubber-like texture. The dimpled finish at the back adds grip and feels good in the hands. The top and bottom bezels are not that thick and the placement of the earpiece and speaker gives it a clean look with a good screen-to-body ratio.

The X1’s 5.7-inch display has a resolution of 1280 x 720 which equates to a pixel density of 258ppi which is still very decent for its screen size. The display is crisp with vibrant colors and good outdoor legibility. 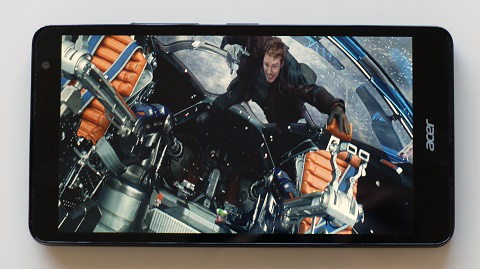 Given its large screen size, the X1 is a great multimedia companion especially if you like watching movies on the go. It features ClearMotion which is a video fluency enhancer that plays your videos at 120fps. But take note that this feature makes your device consume more battery so make sure to turn it off when not really needed. In addition, the X1 also features DTS-HD Premium Sound which enhances sound quality. 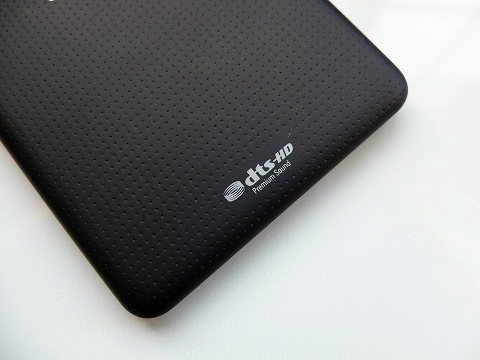 On the downside, the speakers are underwhelming as it falls short when it comes to loudness. When playing music at maximum volume it’s audible but not enough to fill a room. When watching movies we often found ourselves cupping our hands around it just to hear it better. In the end we just opted to use our favorite headphones instead.

Running the software department of the X1 is Android 4.4.2 KitKat with Acer’s UI skin on top. Navigation is similar to stock Android and features a transparent notification bar and on-screen back, home, and recent app buttons. 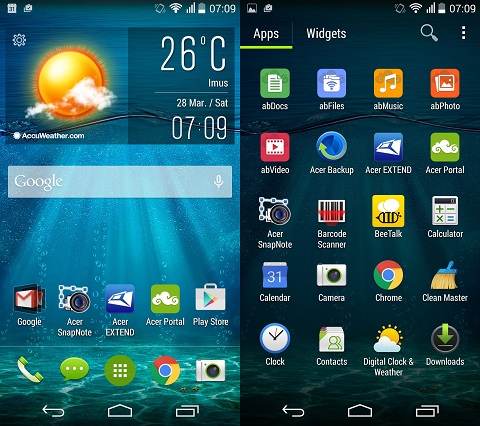 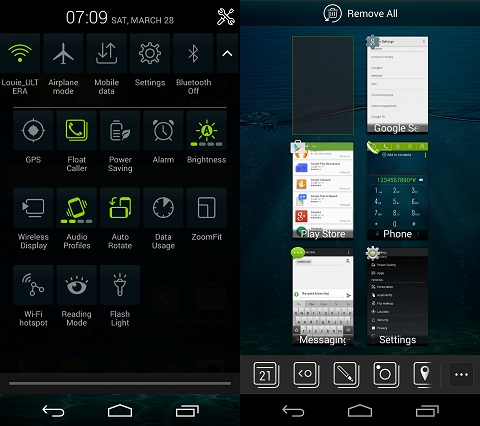 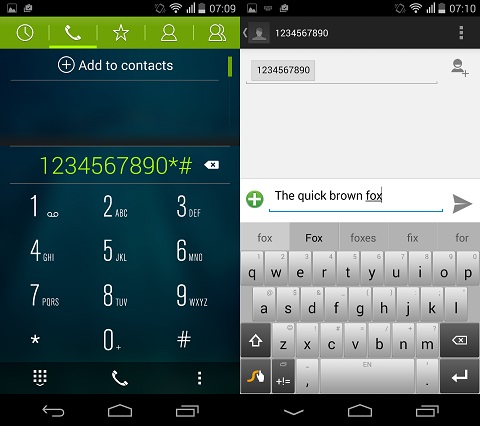 Acer decided to include some useful features as well like Quick mode which allows the X1’s UI to change to different modes (Basic, Senior, Keypad, Classic) depending on the user. There’s Zoom Fit which allows the user to resize the screen from 60% to 90% to aid one-handed navigation, Flip wakeup, Smart Color, and Acer Rapid which lets you change which app the rear key will launch. 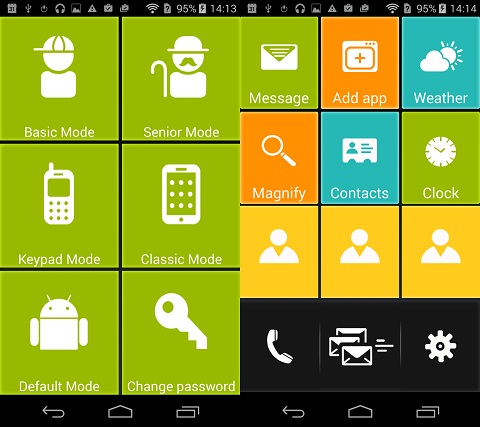 As for internal storage, it has 16GB of onboard storage with only 11.81GB as usable. The good news is, there’s a microSD card slot which can accommodate up to 32GB cards and support for USB OTG.

The X1 has a 13 megapixel AF camera which is quick and capable of producing decent sharpness and quality. Colors are vibrant especially with the reds and blues, however there are plenty of times that it washes out the colors. The 2 megapixel front camera, on the other hand, has a wide-angle lens which is good for selfies but don’t expect it to produce high-quality photos. 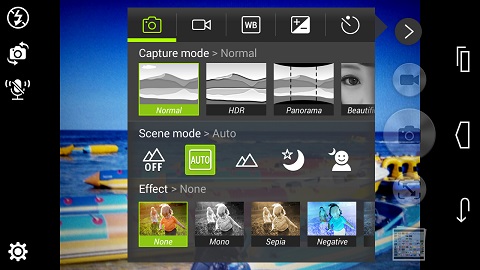 On the bright side, the X1’s camera comes with plenty of features like HDR, Panorama, Beautification, Best Shot, Smile Shutter, Picture with Sound, Free Focus, Multi angle view, Motion Track, and Live Photo. Take a look at the sample images below.

As for its video recording prowess, the X1 can shoot videos of up to 1080p resolution at 30fps. Click on the image below to watch the video: 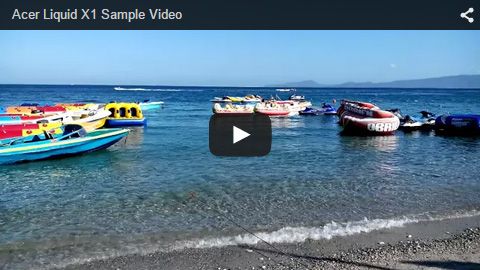 The X1 is powered by a MediaTek MT6592 octa-core processor clocked at 1.7GHz, Mali-450 MP4 GPU, and 2GB RAM. So far we’re satisfied with its performance as animations and app launches are smooth and snappy and was able to run 3D games without issues. As for benchmarks, take a look at the results below:

For those who prefer a phone with dual-SIM support, the X1 can be a disappointment as it only accepts a single micro SIM. On the bright side, it boasts 4G LTE connectivity and was able to pick up signal whenever it’s available. Basic connectivity features like WiFi b/g/n, Bluetooth 4.0, GPS, and FM Radio are also present except for NFC.

As for call quality, the X1 was able to handle our calls well. Voices are loud and clear through the earpiece although the loudspeaker could use some improvement when it comes to loudness.

The X1 packs a removable 2,700mAh battery. We were hoping for 3,000mAh but still it was able to last us a whole day as long as we’re not using it for games too much.

We ran PCMark’s Work battery test and it got a result of 6 hours and 53 minutes. We also performed our routine battery test which involves putting the device on Airplane mode and playing a Full HD video on loop and we got 8 hours and 15 minutes of playback which is good.

The Acer Liquid X1 is a capable smartphone that packs a vibrant 5.7-inch display, 4G LTE connectivity, a very handy rear key, and decent performance and battery life. It’s good multimedia phone thanks to its large display, ClearMotion feature, and DTS-HD Premium audio. As a gaming device, the hardware configuration is enough to keep up with graphic intensive Android games. On the downside, the speaker is not as loud as we want it to be even with the help of DTS. 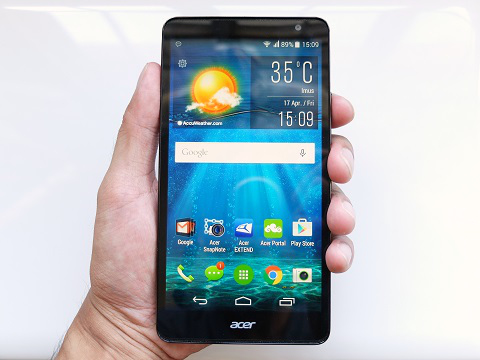 The X1 launched in the country in August last year with a price tag of almost Php20k. The good thing is it’s now down to Php12,990. It won’t break the bank but it’s a tough choice considering that the Meizu M1 Note is now available while the ASUS Zenfone 2 ZE550ML is just around the corner.

What we didn’t like:
* Weak loudspeaker
* No dual-SIM support
* Some apps can’t be uninstalled
* Pricey given the competition