Now that we’re through with the two budget quad-core smartphones (Flare 2.0 & Burst 2.0) from Cherry Mobile, it’s time to look at their mid-range offering starting with the rebranded Cubot GT99 aka Apollo. The thing that stands out most with CM Apollo is its 4.5-inch IPS display with HD resolution. There’s not a whole lot of smartphones in the eight grand price point that offers the same display quality, making this smartphone an easy pick from the bunch.

The lack of scratch-resistant glass on the screen maybe a bit of a deal-breaker for some, but if you’re not too particular about that aspect, you’ll certainly be pleased with its stellar viewing angle, fairly bright output and decent outdoor legibility. Underneath that 720p display is a rather familiar configuration composing of a quad-core processor from MediaTek with 1GB of RAM, PowerVR SGX544 GPU and a fairly small 4GB of default storage. This kind of hardware setup won’t blow anyone away but should be enough to get you through the basic and intermediate stuff without breaking too much sweat.

Here’s a look at the benchmark results we got from the Cherry Mobile Apollo: 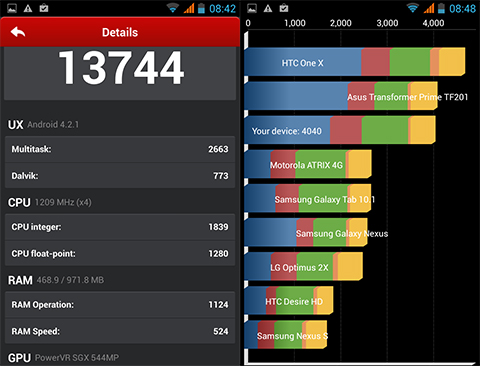 CM bills the Apollo as the “BSI Smartphone ng Bayan” because of its 12MP Backside Illumination sensor. In theory, it should yield better results under lowlight conditions compared to non-BSI cameras.

After taking a handful snaps using the Apollo’s rear camera, we noticed that the pictures we took under broad daylight were relatively good.

However, the image quality starts to degrade just as the light source dwindles down. Even with the pair of flash on, we still struggled to get a decent shot out of the handset. Well, it only goes to show that it’ll take more than the average BSI sensor to take good pictures in dim conditions.

Poor battery life has always been the trade-off for having a pixel-packed display, and unfortunately, that holds true for the CM Apollo. 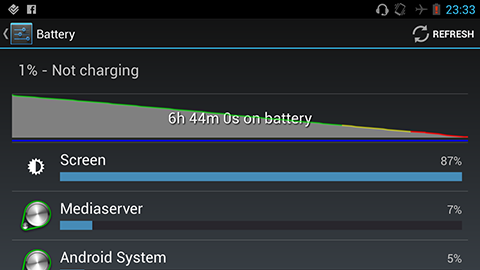 With moderate use this slight battery impediment may not be that obvious. In fact, its 2,000mAh battery managed to get us through an entire day with a single full charge, sometimes even longer when we decide to turn off the data connection.

However, if you compare our battery test result (screenshot above) with the one we got from the Burst 2.0 (which has an almost identical spec sheet as the Apollo sans the HD display), there’s clearly a significant difference on how these smartphones consumes power.

At Php6,999, the Cherry Mobile Apollo is a very decent phone which offers a good balance between price and features. Although it’s marketed for its BSI camera, which was a bit overrated, we think that its best feature is its 4.5-inch HD display. However, it’s important to note that its strongest suit may just very well be its own undoing as far as mileage is concerned. It’s a bit of a compromise, one that some people will take in exchange for a decent display.

What we liked about it:
* 720p display
* Decent specs for price
* Good image quality in well-lit conditions

What we didn’t like about it:
* Generic design and plastic build
* Weak flash and poor image quality in lowlight
* So-so battery life

Hi there, just became aware of your blog through Google, and found that it’s really informative.
I am going to watch out for brussels. I will be grateful
if you continue this in future. Lots of people will be benefited
from your writing. Cheers!

We knew that T in the end means turbo.

I have this apollo and when i test antutu it will comeout cpu model is MTK6589T, is this true that there is T in the end?

So far so good naman ang performance ng cm Apollo im working here in Bahrain and im happy using this phone.Im using 2 Sim card and it works both of them. 7thou is a good price for this smart phone.

i have cm apollo. binili ko ito a month ago…
i’ve played blood and honor, ckz,death tour, csr racing, six guns, iron man and gt racing…. all of this game are still installed in my apollo … and they are playing smooth…. except for real racing 3…. this is enough for me to be satisfied of my apollo… speaking of camera… it still excellent for its 12 mp and battery life if more than a day….