It’s undeniable that the local smartphone landscape has changed with the arrival of aggressively-priced midrange smartphones like the A7000, Flash Plus, and the M1 Note. These smartphones not only set a new standard for what a “bang-for-the-buck” handset should be, but also gave local brands a taste of their own medicine in the process. 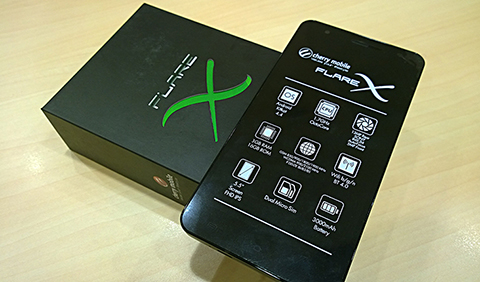 Cherry Mobile’s response came in the form of the Flare X – a mid-range smartphone that sports a competitive hardware setup and has a tempting price that puts it in an even playing field against other crowd-favorites.

The Flare X isn’t exactly an attention-grabber. Its straightforward design coupled with a conventional form factor will not immediately impress any on-looker at first glance. It’s only when you held the handset, however, will you appreciate the Flare X’s minimalist design and pretty decent build quality.

The uncluttered layout of the handset’s front panel is almost screen with just enough room at the top for the earpiece and 5-megapixel front camera, and three capacitive Android navigation buttons at the bottom. 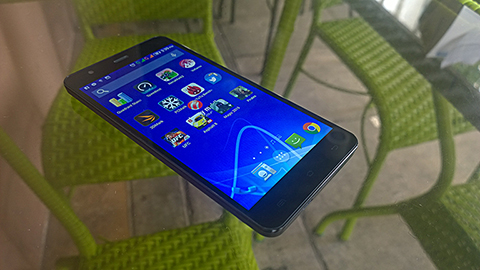 Both the Power button and volume rockers are located on the right side of the Flare X and are placed ergonomically to suit the natural position of the right thumb when holding the handset. These buttons are too flushed for our liking, but provides a satisfying feedback when pressed.

Meanwhile the audio jack and MicroUSB ports are situated at the top and bottom portions respectively. 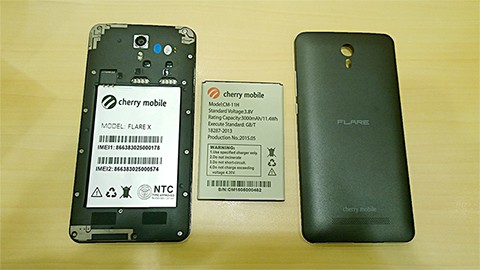 At the back you’ll find a 13-megapixel camera smacked right in the middle, neighbored by a dual-LED flash unit. Below is a speaker grille that hides two speakers units underneath.

Prying open the polycarbonate back cover will reveal two microSIM card slots and a microSD card slot. Sadly, user’s need to first take out the handset’s 3,000mAh battery to access any of these card slots.

The slightly curved back panel of the Flare X together with the non-glossy coating of the removable back plate makes the smartphone comfortable to hold.

Nowadays, a 5.5-inch full-HD display seems to be the standard for mid-range smartphones. Some users, especially those who prefer a smaller screen, may not be too happy about this trend, but we imagine that most users will appreciate having a fairly large screen real estate on their handset.

Although the Flare X shares the same screen size and resolution with its midrange contemporaries, it has a few tricks up its sleeves that give it a slight edge over its competition.

The use of an LTPS (low-temperature poly-silicon) in-plane switching OGS panel, for one, is a good example of this. In addition, the Flare X is equipped with a Corning Gorilla Glass 3 which was lacking on some of the popular value-oriented smartphones.

Needless to say, the quality of the screen of the Flare X is more than sufficient to handle your average smartphone needs. Color shifts when viewing the display at extreme angles are hardly noticeable, the color reproduction is good, and hardly found ourselves looking for a shade when using the Flare X outdoors.

The handset’s great display is complemented by loud and clear sounds courtesy of the dual stereo speaker setup found at the back of the Flare X, near the bottom section. It’s one of the few smartphones that has a speaker on the back that we didn’t have to cup our hands behind in order to comfortably hear the sound from it.

If there’s one aspect that the Flare X lags behind other competitively-priced mid-range smartphones is its OS. Most of its contemporaries have Android Lollipop right off the box, the Flare X has to make do with Android KitKat.

It’s not exactly a major drawback, but considering that Cherry Mobile doesn’t have a good track record of releasing timely software updates, potential users are likely to be stuck in this OS version for as long as they own this handset.

On the upside, we’re glad that Cherry Mobile went for a straightforward user interface, devoid of funky looking icons and unnecessary customizations that, more often than not, do more harm than good.

Pre-installed apps were also kept at a minimum. Apart from the usual set of Cherry Mobile apps (Pinoy App Store, Wireless Update, Cherry Fun Club and Cherry Play), the only other pre-installed apps on the Flare X are Dr. Booster and Kakao Talk.

This means that a good portion of the handset’s 16GB internal storage (12.65GB usable) is still available at the user’s disposal.

Installing third-party apps is a breeze. We didn’t encounter any issues downloading and installing apps on the Flare X from the Google Play Store. The same can be said for sideloading apps.

Thanks to its beefy internal hardware configuration consisting of an octa-core processor, 3GB of RAM and a capable Mali T670 GPU, we were able to pretty much throw everything the Flare X’s way.

It handled multitasking and graphics-intensive titles with relative ease and without generating too much heat in the process.

We’ve seen a lot of 13-megapixel rear cameras in our time. Some claim to have an image sensor with the said resolution when in fact it’s interpolated, while some are legitimately 13-megapixel shooters.

We’re glad to report that the Flare X belongs to the latter group thanks to the Sony IMX214 sensor. You can find more information about this sensor here, but basically it can deliver amazing shots especially in good lighting conditions.

The Flare X’s camera was able to capture a good amount of detail in the scene and stayed faithful to the actual color of the scene. Image sharpness and autofocus speed are also commendable, albeit not in the same league as smartphones with top notch cameras.

The Flare X’s imaging prowess extends to video recording. It doesn’t have those fancy features like slow-motion capture and 4K video recording, but full-HD video recording at 30fps should be enough for average video capture needs. 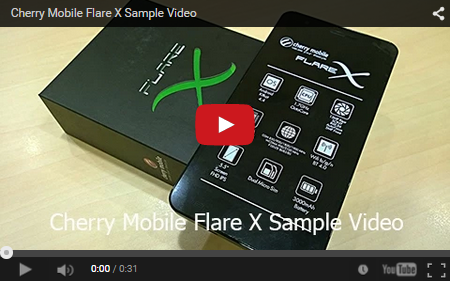 In terms of basic phone functionality, the Flare X didn’t give us any sort of issue whether with sending/receiving SMS or taking/placing a voice call on any of the two SIM card slots.

Network-related problems aside, the handset was able to pick up strong signal from any of the telcos that we tried on it which resulted in to clear voice calls and timely arrival of new SMS. Furthermore, LTE connectivity is supported on both SIM card slots, but not simultaneously.

It takes roughly around four (4) hours to fully charge the CM Flare X after being totally drained. It also took roughly the same amount time to drain it when we played Duels of the Planeswalker 2015 with the Wi-Fi turned on with various social media apps and email apps running in the background.

The handset fared better when we ran our standard battery test. It lasted for a little over nine (9) hours when we looped a full-HD video after fully charging it (as seen on the screenshot above). The handset was placed on Airplane mode during the test and all of the other features (GPS, Bluetooth and NFC) were disable.

Meanwhile, the Flare X got 6 hours and 17 minutes when we ran PCMark Work battery test. We also used the same test parameter when we ran this test on the Flare X.

With the recent influx of bang-for-the-buck smartphones in the local market, it has become tougher for brands, both local and international, to lure in potential consumers because of the cut-throat price tag and powerful hardware configuration of the new breed of midrange smartphones.

However, this kind of aggressive business strategy is right up Cherry Mobile’s alley so it’s really not surprising to see them come with the perfect answer to their competitors – the Cherry Mobile Flare X.

The CM Flare X is a well-rounded smartphone that offers remarkable performance, decent image quality from its rear camera, and good battery life. Design is probably the least brightest spot of the Flare X, but even that gets a nod from us as the handset still feels sturdy and well put together despite its all-plastic make.

To conclude, if you still haven’t decided on which midrange smartphone to get, then you should really take a closer look at the Cherry Mobile Flare X. It has all the right tools to go toe-to-toe with the best midrange smartphone currently in the market and a Php6,999 sticker price that won’t break the bank.