Cherry Mobile’s latest affordable smartphone packs quite a punch. It features a 4.5-inch screen, a dual-core processor and dual-SIM capabilities. Hearing the Thunder is one thing, but there is more to it than we speak. Read our full review after the break.

The CM Thunder made quite when Lazada announced it’s going to be offered exclusively in their online store for a very competitive price of Php4,999. 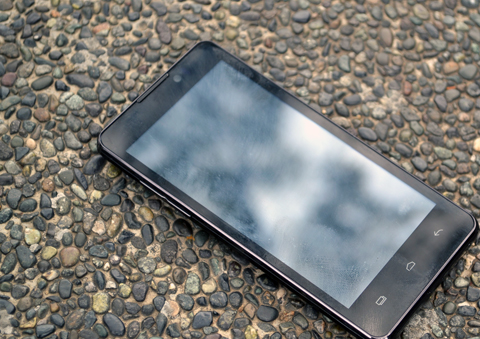 The Thunder is a tank. It’s one of the most solidly built phones of this class – no creaking, no soft spots, no flaws. Of course, just like a tank, it’s heavy and its design certainly looks uninspired. Up front is the screen, the earpiece, the front-facing camera and the three capacitive buttons – menu, home and back. The menu button looks like a multitasking button, which may confuse some people, but that won’t prove to be a problem anyway. All around the phone is a dark chrome casing, including the volume rocker on the left and the power button on the right. Up top is the audio jack and the micro USB port. Only the microphone is to be seen down below. On the back you’ll find the camera surrounded by chrome as well, together with the Thunder & Cherry Mobile branding and the speakers. The only problem that we saw was the weight and design. It’s not ugly, but it could use some improvement.

The first time I powered the device on, I mistook it for having a qHD display when in fact it’s just a 4.5-inch FWVGA display. That’s how clear the display works regardless of the pixel density of 218ppi. The colors lacked the vibrancy that we wanted, but it certainly has fidelity. 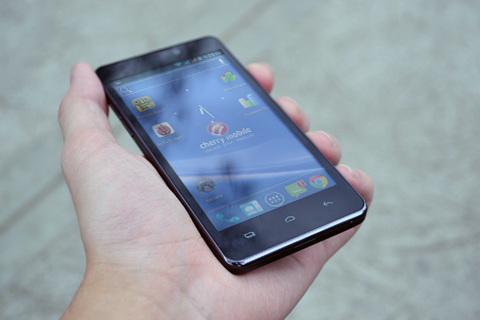 Viewing angles were good as well from the sides and from the bottom, but when you look at it from an angle up top, there is major discoloration.

The Thunder runs Android 4.0 Ice Cream Sandwich with a couple of removable apps – Cherry Fun Club, Cherry Market, ClickTheCity, eWarranty, Kabayan and more. We didn’t find any use for some of them, but it’s a joy cause they are uninstallable. There aren’t many customized elements found in the phone, and basically it’s stock Android all the way, love it or hate it. There are bugs with the software also. For example, pressing the back button on the messaging app won’t close it – and putting the video recording settings beyond high will cause the camera app to close.

They don’t call this phone Thunder for nothing. The speakers are loud and clear, and video playback is quite bad but only because of the display. On landscape orientation, there will be slight discoloration which is very annoying to the eyes. 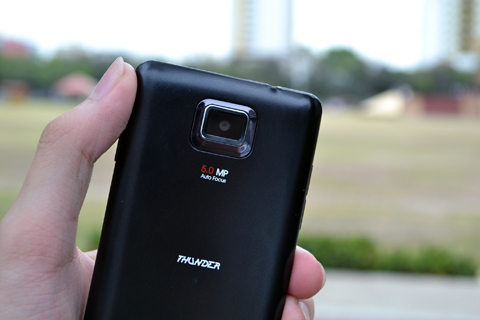 We’ve spent quite some time with this phone, and one of the things we didn’t like was the camera. The camera on the back takes too much space and it creates an impression that it is a large sensor, when it fact it barely does things done. 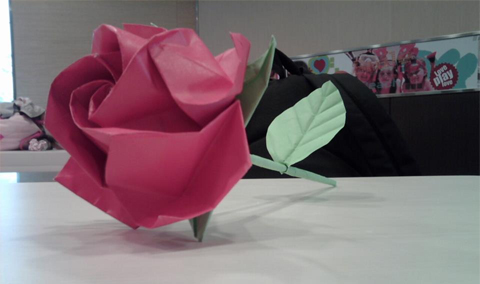 The 5 megapixel camera takes muddy shots, and very noisy shots when not in good lighting. Apart from that, there’s no LED flash so say goodbye to clear photographs. Oh, and just in case you’re rushing to take a photo, it’s bad as well due to camera lag. If you want good photos, keep your subjects and your hands still.

Video recording isn’t any better. As you can see in our sample video, the room is well lit, but when the Thunder starts taking videos, it fails miserably. Early in the video, you’ll find some weird pixelation which is also present in green when playing in the phone itself. We’re not sure if this is a camera bug, but it really sucks either way. It does better in direct sunlight, but again, it’s barely close to decent.

Pressing the capacitive buttons down below was very slow. It responses but it takes a second for it to register. The screen is responsive as well, but you can notice the lag between slides. The Thunder got 2,762 on Quadrant, 26.3 on Nenamark 2 and 6,765 on Antutu. Decent, and the CPU does really well. We think what we have to blame here is the RAM and the responsiveness. It’s okay for the most part, but not for impatient people. Battery life is great on this one. It can get us through one and half day’s moderate use; for heavy users, it will last for a day so don’t forget to charge.

We’ve said it in this review and we’ll say it again because it’s the perfect metaphor: the Thunder is a tank. It’s solid, uninspired, quite slow and not one used for creative purposes but it can surely get things done. A lot of the people I know mistook the phone for something else, and they didn’t believe it was only selling for Php4,999. Of course, with that price, you’re also buying into camera compromises and software issues.

The Thunder can be bought exclusively from Lazada. See listing here.