Happy Mobile recently announced a new device called the Neo Lite, and here’s your first look at the 4.5-inch smartphone with modest entry-level internals — a quad core processor, 1GB of RAM, and a uniquely-patterned back cover all at under Php4K. 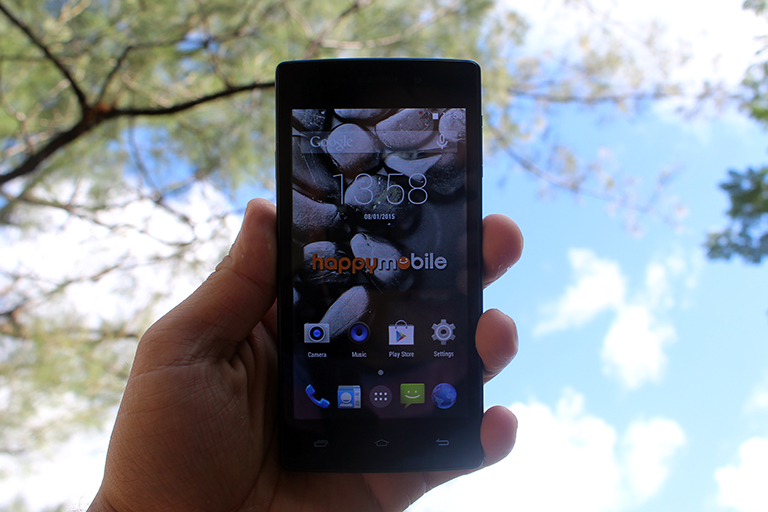 Closely inspecting the device, it presents itself with sharp edges and corners, unlike its contemporaries on the same price range where most settle for arched, curved designs. At the top of the device is the 3.5mm audio jack. On the front is the display, with three non-lit capacitive keys laid down at the bottom. The bottom-left side has the microUSB port.

On the left side is the power/lock button. The other side has the volume rockers, which you might do a double take at first glance because of the chrome embellishment chipped in. At the back is a unibody polycarbonate shell with a signature design consisting of geometric patterns.

These are not only just for design, as it certainly gives off a subtle texture based on what you can see. It also has the rear camera that’s slightly protruding at the top, an LED Flash, and a uniquely shaped speaker grill with the Happy Mobile logo placed beside it. Prying open leads you to a dedicated microSD card slot, and SIM slots that have to pass through removing the 2000mAh battery first. 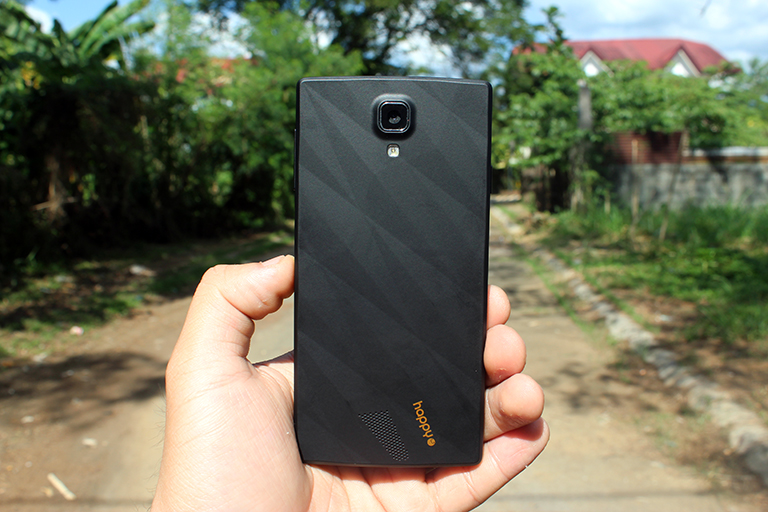 The Neo Lite is a great device to hold despite bearing sharp, boxy edges. It’s very comfortable for one-hand navigation due to its size, and its aesthetics would make you ditch that phone case to flaunt those nice polygons in public.

Display isn’t bad, as it got a 4.5-inch IPS display with the usual FWVGA resolution that’s just quite okay for a device as small as this. Colors are vibrant and accurate, viewing on any angle looks good, and the brightness is just enough for it to be seen outdoors.

Multimedia isn’t a problem as well, as the sounds coming from the loudspeaker can easily fill up a small room with its loud amps, and listening via headphones ain’t that bad.

Camera photos taken with the 8MP rear camera were a bit hazy, produces off colors at times, and details aren’t as sharp as they are supposed to be. Check out these sample shots:

Videos take a hit, as it captures environments with darker exposures. Here’s a sample video taken on a bright afternoon: 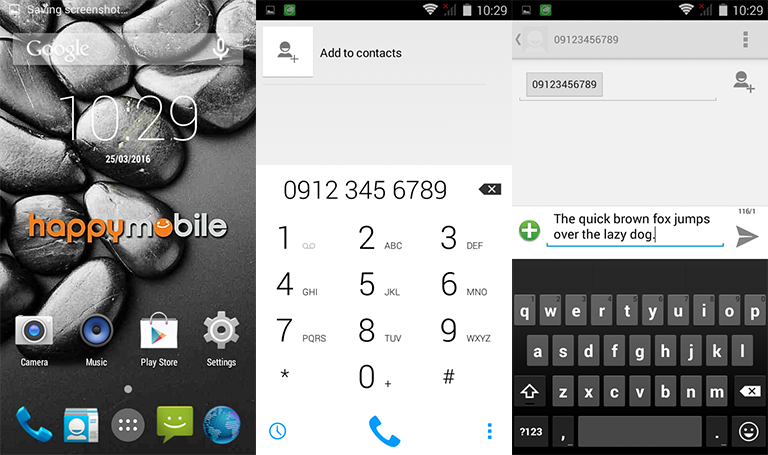 Android KitKat runs this device, and is home to 4GB of storage with 2.1GB usable for apps and other content. There are also options for gestures a la O+ USA’s air shuffle, and nifty tricks such as double-tapping the home capacitive key to lock the device. Several pre-loaded apps are present which consist of social media ones such as Facebook, Twitter, and Whatsapp, which are uninstallable should you not want them at all. We had a problem installing a handful of applications while we were using the device solely relying on its internal storage, and it is a must that you equip a microSD card the moment you buy this phone to install more applications. 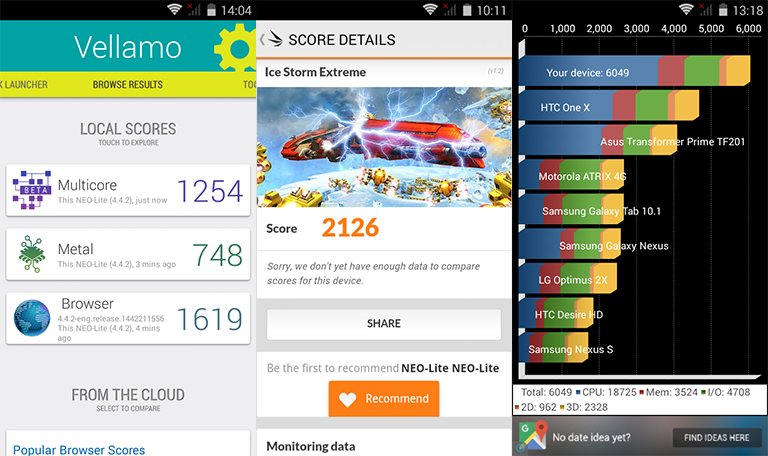 Performance is on the average side, with few to minimal lags in frames when we play graphic intensive games like Zombie Tsunami. Multitasking isn’t a problem, too. Here are the benchmark scores: 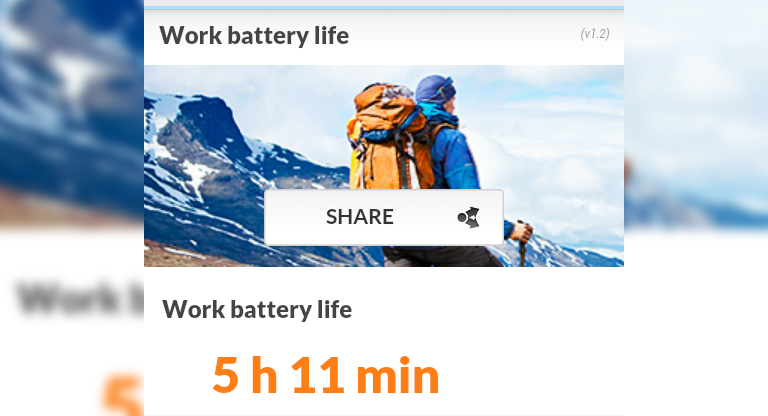 Connectivity isn’t an issue, as we got to call and send messages in a breeze. Other options such as WiFi, Bluetooth and GPS work fine, too. As for the battery life, it has managed to keep the device awake for almost a day of moderate use that includes calls, texts, browsing and app usage over WiFi. Our PCMark battery test showed the device clocking in at 5 hours and 11 minutes, which is really surprising given the 2000mAh battery it has. 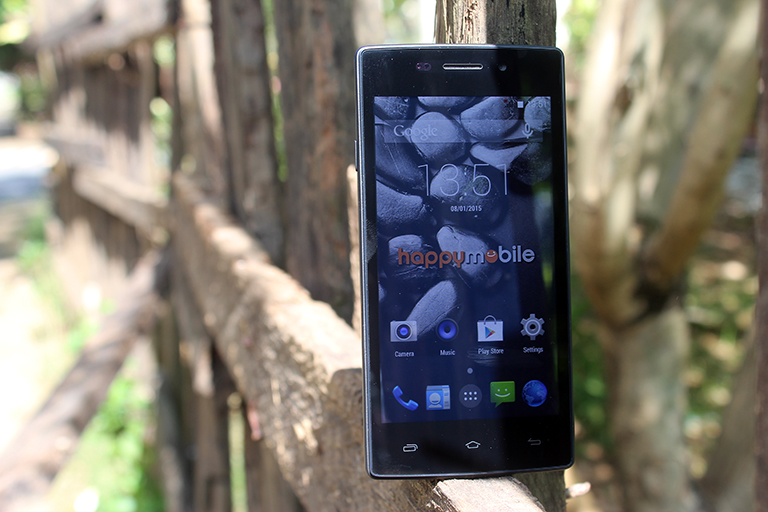 To conclude, this entry-level device from Happy Mobile presents itself with a good performance tucked beneath a well-crafted polycarbonate body. The Neo Lite is a compact smartphone packed with a surprisingly good battery performance, coupled with occasional wireless updates and loud speaker sound.

In contrast, the absence of an LED notification light, a rather underwhelming camera, and the need for a microSD card to install more apps when there is enough free space left can be deal-breakers for some. The price, too, at Php3,499 could be a letdown as there are other affordable smartphones that are priced much cheaper than this.

Nevertheless, the Neo Lite is a beauty with performance, and could be a hit among those who want to stand out among the crowd.

What we liked about it:
* Great design and build
* Good performance
* Good Battery life

What we didn’t like:
* The need for a microSD card to install more apps
* NO LED Notification light
* Sub-par rear camera